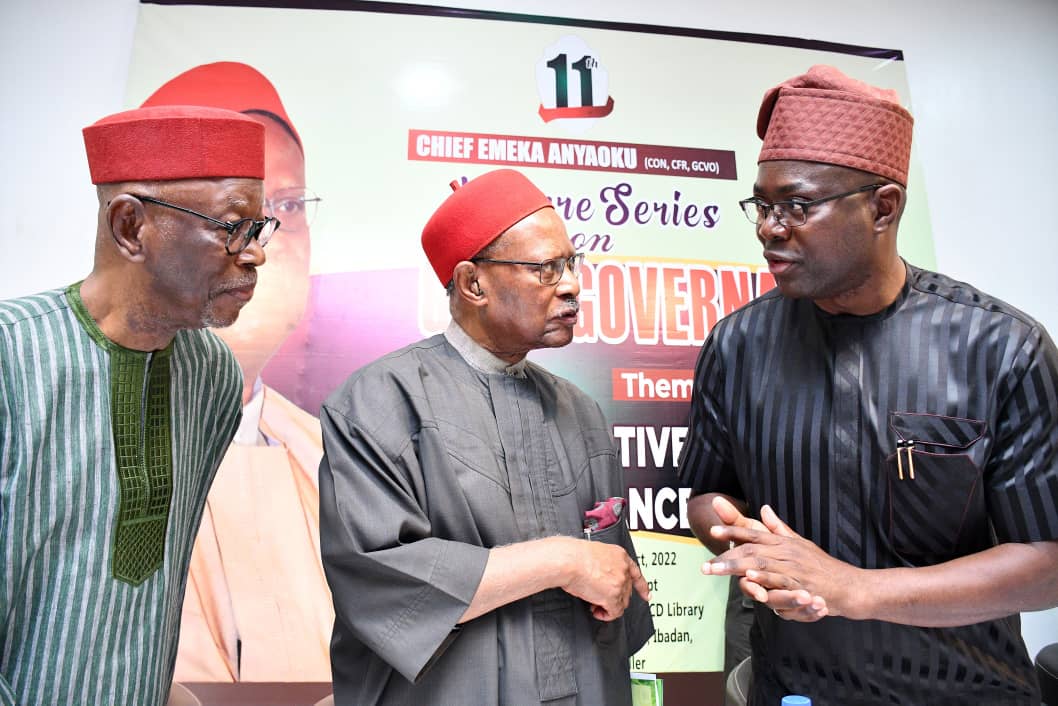 Oyo State Governor, ’Seyi Makinde, on Thursday, declared that his administration has employed the principles of transparency and integrity to activate good governance in the state.

The governor said that his administration has been able to achieve success because it has been transparent with the finances of the state.

A statement by the Chief Press Secretary to the governor, Mr. Taiwo Adisa, indicated that Governor Makinde stated this at the 11th Chief Emeka Anyaoku Awards/Lecture Series on Good Governance, organised by the Youth Affairs International Foundation, held at IACD Library and Resource Centre, Jericho, Ibadan.

Also speaking at the event, renowned diplomat and former Secretary-General of the Commonwealth of Nations, Chief Anyaoku, said that the 2023 election is a watershed for Nigeria, adding that citizens must vote for politicians who will prioritise the revamping of the nation’s governance system.

Makinde had said: “I want to thank the organisers for bringing this edition of this brilliant event to Ibadan and giving us the opportunity to host the 11th Chief Emeka Anyaoku lecture series.

“Well, I am always excited about any event that brings together leaders; the learning opportunities they provide do have profound impact on leadership and governance. “Justice has been done to the topic entitled ‘imperative of good governance in Nigeria.’

“I sat down there and listened to the lecture and I have also heard the discussion about 2023. Some people say good governance is a relative term, which is difficult to define but from the keynote speaker, he has taken us through some parts where we know if there is anything like good governance, there will definitely be bad governance.

“And we have experienced both in Oyo State and Nigeria, but let me go spiritual a little bit. Some of the speakers have alluded to good governance in Oyo State and I thank you for that encouragement.

“It is not only me but some of the people we are working together to provide good governance for the people. I coined an acronym of FAITH for this. F is for Fidelity, A is for Accountability, I stand for Integrity, T is for Transparency and H for Honesty. Two of these have come into play in governance in Oyo State.

“In our administration, we decided to be transparent with the finances of the state. For each budget cycle, we hold town hall meetings across all the geopolitical zones in the state to ask our people what they want to see. We also let them know that government resources are limited.

“So, transparency is what we have achieved in Oyo State. Good governance also needs accountability. We created various feedback channels for our people including media chats, because we want the people to hold us accountable and tell them precisely how things are and we were able to bring out the facts and allow people to determine whether or not they are enjoying good governance in Oyo State.”

The governor insisted that for there to be good governance, there are critical issues that should be looked into, including state police, devolution of powers and local government autonomy.

He noted that for states to be able to perform optimally, unlike what obtains in the 1999 Constitution of the Federal Republic of Nigeria, they should be free to create as many local governments as possible for administrative convenience, stating that until some of these issues are addressed, there will continue to be challenges to good governance.

The governor also pointed out that in order to deliver good governance, it is imperative for public officials to be able to take in criticisms both constructive or otherwise, noting that as the campaign begins, he is aware that his opponents will come at him with lots of half-baked facts and not-well-thought-out positions.

“A particular politician mentioned a few weeks ago that the bus terminals we are building all around Ibadan will be turned into hostels or libraries. Well, our honouree today has mentioned how Ibadan used to be and how it has grown over the years.

“One thing he didn’t say is that Ibadan grew from being a nodal city. A lot of people pass through Ibadan to their destinations. So, if we are going to expand our economy, it is a no-brainer that we focus on our transportation system,” the governor said.

In his response, the honoree, Chief Anyaoku, asked Nigerians to only consider and vote for leaders they could trust, to revamp the country’s political structure and security management, among other concerns.

He listed some factors that inhibit good governance to include institutional decay; lack of inclusiveness; lack of respect for rule of law; poverty of ideas and ineffective ethical leadership, adding that Nigerian citizens must work actively to achieve the turning point we need as a nation.

The lecture was chaired by a former Governor of Edo State and chairman of the Governing Council, University of Ibadan, Chief John Odigie Oyegun.