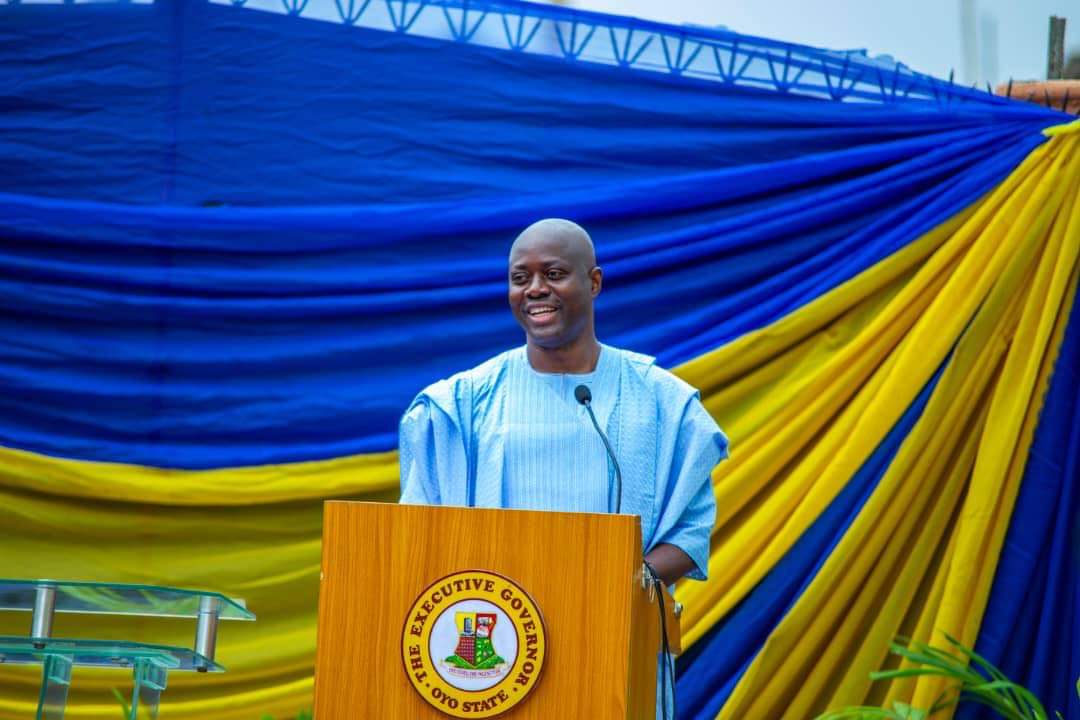 …says an educated mind cannot be held down
…as Ministries’ dedicate facilities named after Adeboye, Udom

Oyo State governor, Engineer Seyi Makinde, on Sunday, declared that his administration would continue to prioritise education, saying that education remained the key to societal growth.
Makinde, who spoke at two separate events put together by the Bishop of the Sword of the Spirit Ministries, Bishop Francis Wale Oke, said that the state’s economic recovery programme can conveniently rest on a properly fixed education sector.
Speaking at the dedication of the Global Mission Centre and Global Mission Plaza, which were named after the General Overseer of the Redeemed Christian Church of God, Pastor E.A Adeboye, and the governor of Akwa Ibom State, Governor Udom Emmanuel, respectively, Governor Makinde said education would ensure that people embrace development.
A statement by the Chief Press Secretary to the governor, Mr. Taiwo Adisa, quoted the governor as adding that educated minds cannot be held down by any means.
He also stated that with the dedication of the campus, more missionaries will get educated, adding that the manner in which the church is contributing to the growth of the education sector was commendable.
He said: “I am always excited when I get invitations to speak at events that have to do with education. If I were told to choose one of the four pillars of our administration and which one to use to build the economic recovery of Oyo State, I will most likely choose education as the foremost. An educated person cannot be held down.”
The governor charged the people of the state to support the government in its efforts to develop the state to a greater height, saying: “A lot of people may not know but mission schools have had a long history in Oyo State. One of the mission schools was built here in Oyo State over 70 years ago. So, these days, some people think that the work of building schools should be left only to the government.
“I will always say that the government can only do so much. Development is a collective responsibility.
“The main function of government is to make and enforce laws that will make the lives of the citizens better. As we fellowship together, let us not forget the importance of our roles as citizens. We should not rest on our oars.
“We can have many more of these mission schools for the education of our people and, as partners in progress, we are open to listening to you. If there are bottlenecks in your work, which you believe the government can straighten out, do not hesitate to reach out to us and we will see what we can do about it.”
The governor also appreciated the founder of the Ministries, Bishop Wale Oke, for hosting him at the 38th Annual Holy Ghost Convention of the Ministries and for his contributions towards educational development in the state.
Similarly, Akwa Ibom State governor, Mr. Udom Emmanuel, lauded Bishop Oke for imparting so much in him.
“I thank God for a day like this. Our father, Bishop Wale Oke, has imparted in me so much, especially in this political terrain. I want to join my faith with others to say that there will be an increase that is beyond his expectation,” Udom said.
Governor Makinde, who also joined Bishop Oke and Pastor Adeboye at the sod-turning ceremony for the Tabernacle of David Cathedral at Covenant Chapel, Ecumenical Centre, along Secretariat, Ibadan, declared that he would support the building project and see to its completion.
Earlier in his sermon, Pastor Adeboye called on people to believe in God and seek his guidance always, while also commending Bishop Oke for being steadfast in spreading the gospel of Christ.
Dignitaries at the event include the Governor of Akwa Ibom, Udom Emmanuel; wife of the Oyo State Governor, Engineer Tamunominini Makinde, wife of Pastor Adeboye, Mrs Folu Adeboye, church leaders and top functionaries of Oyo and Akwa-Ibom State governments.
Signed
Taiwo Adisa
Chief Press Secretary to Governor Seyi Makinde
30 August, 2020.