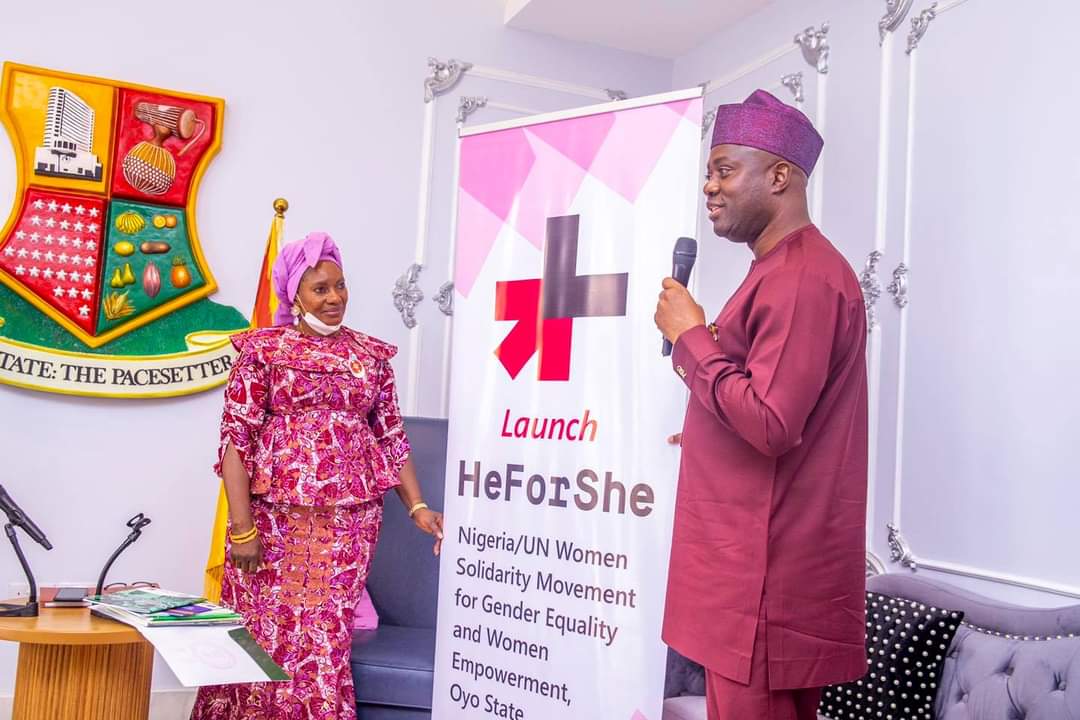 Governor Seyi Makinde of Oyo State on Friday, declared that his administration will continue to engage more women and Persons Living With Disabilities (PLWDs) in his government.

The governor stated this while receiving the Minister of Women Affairs and Social Development, Dame Pauline Tallen, who was on an advocacy visit to his office, at the Courtesy Room of the Governor’s Office, Secretariat, Agodi, Ibadan.

A statement by the Chief Press Secretary to the governor, Mr. Taiwo Adisa, quoted the governor as saying that his government has been fair to women and the disadvantaged groups in the society.

The statement added that the governor equally launched the HeForShe initiative in the state, saying his administration has been doing its best in empowering women and catering to the vulnerable and disadvantaged groups.

He said: “In Oyo State, if you go to the Secretary to the State Government’s Office, and you see the pictures of past SSGs, this will be the first administration to appoint a female as SSG.

The governor stated that his administration has reduced the number of out-of-school children by cancelling school fees and levies, noting that school enrolment has improved by 10 per cent since the inception of the government.

He added: “Here, we have a Commissioner for Women Affairs and Social Inclusion, because we are not just talking about women affairs; people that are disadvantaged, the groups that have visibly been forgotten or are being left behind, we bring them in.

“Some of the data from the United Nations about Oyo State before we came in showed that we had issues with out-of-school-children. And when I was campaigning, one thing that we found out was that the money they were paying in schools was a hindrance to some of them attending school. So, we removed that and the government has been giving subventions to schools in place of the levy on parents.

“I believe that with the data that we have right now, enrollment has gone up by over 10 per cent since we came in.

“So, we have done quite a lot in terms of social inclusion, by engaging disadvantaged groups and even on the “HeforShe” on the health side. I am sure if you have the chance to meet with the Commissioner for Health, he will tell you about the T’omo T’ìyá Programme, which we just launched a few weeks back.”

While launching the ‘HeForShe’ project, Governor Makinde expressed the readiness of the state to partner  the Federal Ministry of Women Affairs and Social Development on the development of women in the state.

“This case you just mentioned, we will look into it and we want to partner you. You are on an advocacy visit and I am an advocate. So, we will all join-in, because we know and I personally have seen tremendous capacity from the women members of this cabinet. They are here not only because they are women but because they are qualified and they have the necessary prerequisite skills and temperament.

“Part of the advocacy is to get more women to participate. I can tell you that we were looking for women for positions but usually it takes us some time; political positions as well.”

The governor urged women to boldly participate in politics so as to contribute their quota in uplifting the country, saying: “We have to encourage them and we have to sanitise our political space itself such that violence and all the negative things that are acting as drawbacks in women participation will give way.”

Earlier, the Minister of Women Affairs and Social Development, Tallen, said the visit was aimed at discussing issues that affect women, girls and boys in the state and the Nigeria society in general.

She said: “Your Excellency, I am very delighted to be in the state and to pay you this special advocacy visit aimed at discussing issues, which in my opinion, are critical to the development of women, girls and boys in the state and the Nigeria society in general.

“It is my hope that this visit will further stimulate partnership between my Ministry and the state in the provision of better services and enabling environment for the advancement, empowerment, protection and participation of the teeming population of women and girls, including the survival of children and other vulnerable groups in the state.”

She commended the governor for supporting women and promoting women’s rights, empowerment and advancement in the state, adding that Makinde deserves commendation for appointing a female SSG, a female Head of Service and two female commissioners.

She added that five permanent secretaries, Director-General of Due Process and others were among the women in top positions in the state, saying, however, that “we are still asking for more because women deserve more than these.”

She further said: “From the response of the governor, I am fully satisfied that a lot more appointments will come soon, starting from the local government levels to the state. And I wish Oyo State all the best. There will be more progress and development if more women are engaged in governance as well as the support for our children to receive the necessary support they deserve.”