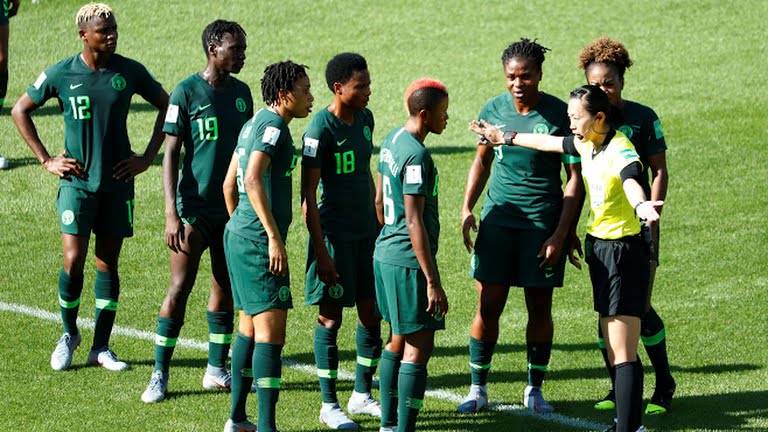 The Nigeria national women’s team will hope to end their campaign at the 12th Women Africa Cup of Nations on a high on Friday night.

Having been denied a chance for a record-extending 10th title, the Super Falcons are left to battle Zambia for the bronze as a consolation.

What is fondly referred to as the losers’ finals will take place from 9 p.m on Friday at the Complexe Mohamed V in Casablanca – Morocco’s economic and industrial capital.

Unfortunately, the Super Falcons have been dogged by a number of issues going into the third-place clash, which may take a toll on their performance.

At least three key Super Falcons players are out of the clash in Casablanca.

Captain Onome Ebi is ruled out with a hamstring injury (biceps femoris muscle tear – Grade 2) and could require between six weeks to two months to recover.

She suffered the injury in the gruelling semi final battle against Morocco on Monday that the Falcons eventually lost on penalty shootout in Rabat.

Likewise, forward Rasheedat Ajibade, who has been one of the top performers for Nigeria in Morocco, with three goals to her name, is also out.

There has also been the off-pitch distraction for the Super Falcons who skipped three training sessions in protest for unpaid allowances.

The team was only placated with the payment of their camp allowance on Thursday before they grudgingly returned to have a solitary training session.

Despite the undesirable situation he has found himself, Coach Randy Waldrum is optimistic that the Super Falcons will give their all to avoid retuning home ’empty-handed’.

“We have two players suspended as a result of red cards in the last game, and we also have some players down with injury. So, there will be changes but we will go for the best legs that would give us victory on Friday,” the American told reporters at the pre-match press conference.

For Ashleigh Plumptre who will coordinate affairs at the backline in the absence of Ebi, she has promised the team will treat the Zambia clash like a final match.

“We have a mountain to surmount, surely, but we are ready and will approach the game like the final match,” the Leicester City defender said at Thursday’s pre-match conference.

With Ebi out, Waldrum could start with the US –based Payne sisters (Toni and Nicole) on either side of the rear wings, with Osinachi Ohale and Plumptre at centreback.

Peace Efih, who scored one of the goals in the 4-0 defeat of Burundi in the group stage, could start in the absence of Ayinde, with the effervescent Gift Monday a probability to start in place of the suspended Ajibade.

On his part, Head Coach of Copper Queens, Bruce Mwape said his girls have put behind them the controversial defeat to South Africa and are looking at a good outing against Nigeria.

“We gave our all and created chances but we failed to take them and that was a mistake that we paid dearly for in the end. We have put that behind us and now, we want to win the bronze medals for our people.”

Mwape will bank on team captain Grace Chanda to inspire the Copper Queens against the Super Falcons. Chanda has been the rallying point of the southern African nation since the beginning of the tournament, in the absence of the talismanic Barbara Banda.

The Copper Queens drew 0-0 with Cameroon in their opening match, before 1-0 and 4-1 wins over Tunisia and Togo respectively shot them to the quarter finals, where they edged Senegal 4-2 after penalty shootout.

The Falcons lost 1-2 to South Africa in their opening game before beating Botswana and Burundi 2-0 and 4-0 respectively, and Cameroon 1-0 in the last eight.