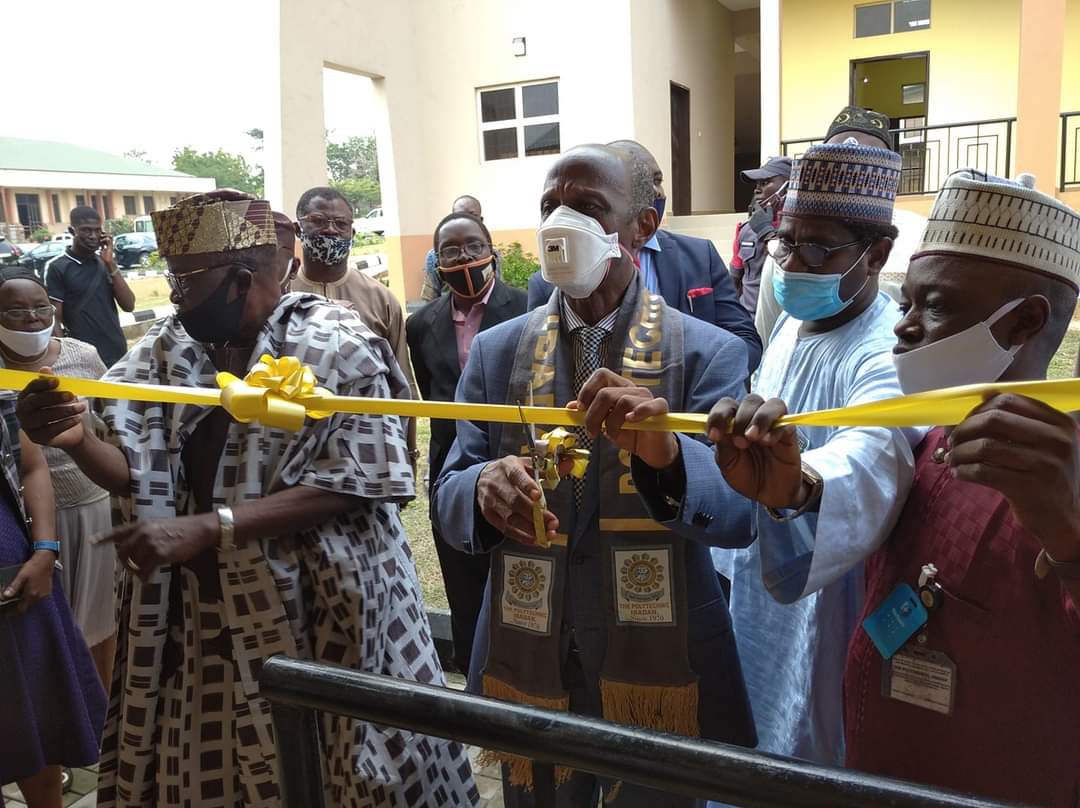 The Executive Secretary of the Tertiary Education Trust Fund (TETFUND) Prof. Suleiman Elias Bogoro has given The Polytechnic, Ibadan (TPI) a pass, mark for the quality of the projects done.
Professor Bogoro gave the commendation on Thursday during a courtesy call on the Authorities of The Polytechnic, Ibadan (TPI) where he commissioned three building projects constructed by the Management with the fund provided by TETFUND.
The TETFUND Executive Secretary who commissioned a 250 and 150 seater Lecture Hall and 350 seater lecture hall converted into a 400 seater hall with funds provided by The Polytechnic also commissioned a 300 seater Technical/ Engineering Drawing Studio on behalf of the Chairman of the Board of Trustees of TETFUND, Alh. Kashim Ibrahim- Imam who was unavoidably absent.

He noted that there are several Institutions in the country benefitting from TETFUND but not all of them are performing as expected, hence some of them never completed their projects on schedule while the quality of some projects were questionable.
He commended the Rector of The Polytechnic, Ibadan (TPI) for the quality of work done adding that he only visits Institutions with performing heads, adding that the Rector of The Polytechnic, Ibadan is one of the performing heads of tertiary Institutions in the country.
He also commended the humble nature of the Rector adding that since he met him about a year ago, they have been very close and have become personal friends.

Professor Bogoro commended the Federal Government for the establishment and funding of TETFUND pointing out that the body has no doubt turned around the fortunes of tertiary institutions in terms of provision of facilities and training of personnel.
Earlier, the Chairman of the Governing Council of the Institution, Prof. Kunle Akinyemi and the Rector, Prof. Kazeem Adekunle Adebiyi had commended TETFUND for the support given to the Institution and like Oliver Twist requested for more.
They also promised that projects approved for the Institution will always be executed within the approved time frame while the fund will be judiciously spent