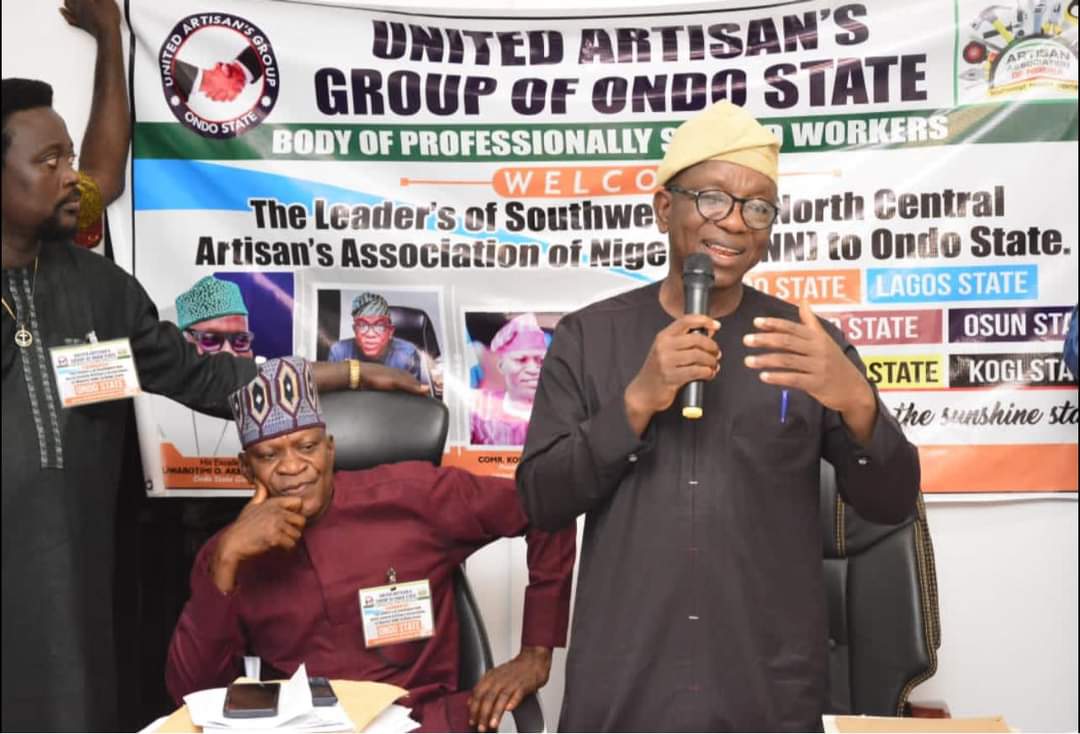 The artisans, who gathered in their large numbers declared their support for the Tinubu/Shettima joint ticket.

They pledged to work for the victory of the APC Presidential candidate come 2023 presidential election.

Speaking, the President General, United Artisans Group of Ondo State, Comrade Komolafe Daisi, lauded Governor Akeredolu over his commitment to the wellbeing of artisans in the state.

Comrade Daisi used the occasion to congratulate Governor Akeredolu on his appointment as South West Coordinator of Tinubu/Shettima Campaign.

He assured that all the leaders and members of professionally skilled workers across the South West and North Central would give the Governor all necessary support to ensure overwhelming victory for Tinubu at the polls.

Comrade Daisi disclosed that the artisans across the South West and North Central came together under the umbrella body of Artisan’s Association of Nigeria (AAN), to work with Governor Akeredolu to ensure the success of Tinubu/ Shettima joint ticket.

The President General expressed happiness that Ondo State is the first state to officially host the group.

“Our coming together is to make sure we work with you as the Coordinator of Tinubu/Shettima Campaign Group for the South West in making sure our candidate, His Excellency, Bola Ahmed Tinubu becomes the President of Federal Republic of Nigeria by next year.” He said.

In their separate goodwill messages, the President, Lagos State Council of Tradesmen and Artisans, Alhaji Nurudeen Buhari and his counterpart from Kwara State, Alhaji Jimoh Adeshina commended Governor Akeredolu for providing leadership in the South West and the country at large.

They also assured the Governor of their readiness to give their best for overwhelming victory of Bola Tinubu.

Receiving the artisan leaders, Governor Oluwarotimi Akeredolu, appreciated them for their belief in the Nigeria’s project, describing their support as a sign of good thing to come.

Governor Akeredolu, who was represented by his Special Adviser on Union Matters and Special Duties, Mr Dare Aragbaiye, said Tinubu/Shettima joint ticket is a collective project which everybody must support for a better Nigeria.

He equally called for unity and togetherness among members of the group to achieve a common goal, saying that the present administration gives priority to the welfare of all including artisan groups.

“Ondo State Governor and Ondo State government appreciate you. And I want to assure you that we need the support of all and sundry. We believe that with the support of the Almighty God, victory is assured.

“We thank you for your determination to support Mr Governor in the task ahead so that we can achieve success together.“ He said.