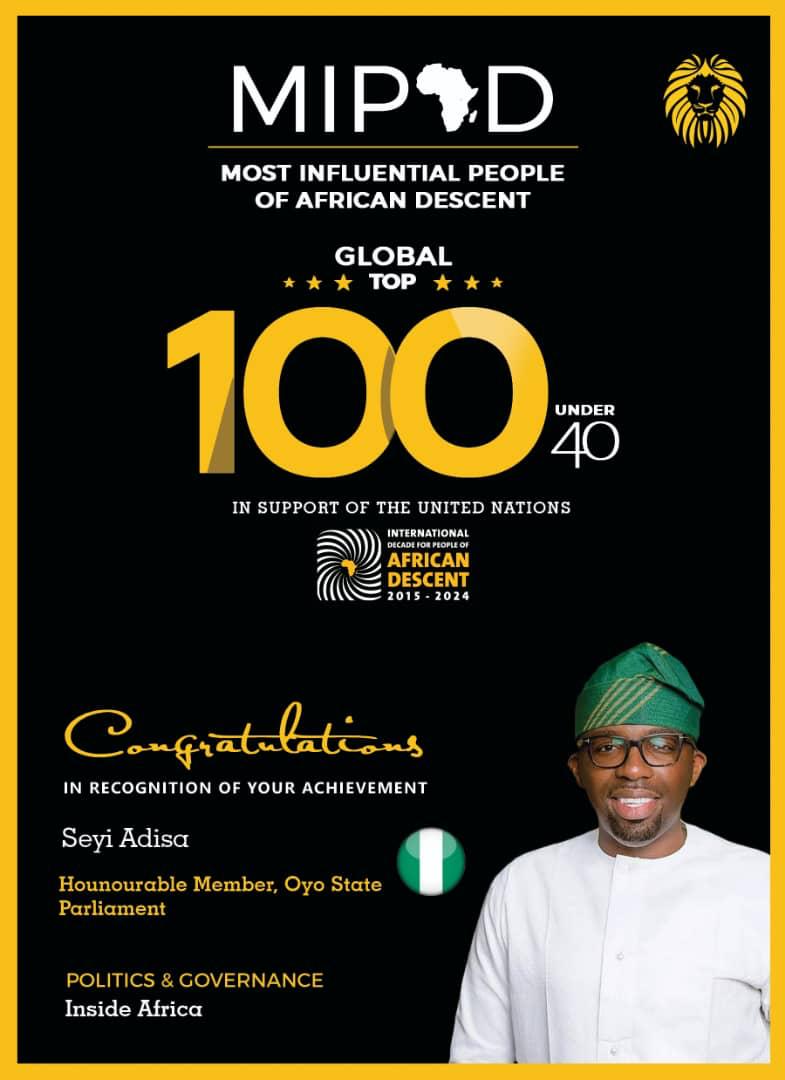 The Oyo State House of Assembly member representing Afijio state constituency, Hon. Seyi Adisa, has been given a global recognition as one of the top 100 most influential people of African descent by a United Nations-affiliate, the MIPAD 100.

This announcement was made on their official media channels on 6th of October, 2020.

Hon. Adisa was categorised in the Politics and Governance category.

“It is with great honor that we will unveil the 2020 Most Influential People of African Descent (MIPAD) global list, to highlight the positive contribution made by people of African descent in public and private sectors worldwide.

In response to the current global gender and racial equality movement, we title the 2020 Edition “Global Reckoning,” with the theme “Representation Matters.”

In this edition, we looked around the world to check the presence of people of African descent at the highest positions in the largest, most influential and iconic institutions in the world. And, in the spirit of recognition, we celebrate and showcase outstanding personalities at the highest positions in the world because our “Representation Matters” on the decision making tables in Politics & Governance, Business & Entrepreneurship, Media & Culture and Humanitarian endeavors worldwide”

MIPAD publishes a unique global 100 list that identifies high achievers of African descent worldwide, pairing those based across the Diaspora with their counterparts inside Africa, across various verticals, annually until 2024.

A politician who also doubles as a John Maxwell Leadership coach, Hon. Seyi Adisa’s recognition comes off the heels of championing a style of politics he rightly calls the “Politics of development”, a political ideology aimed at deploying participatory governance for the direct development of people and communities.

He has a law degree from the University of Birmingham. He is also a graduate of The BPP Law School where he obtained a distinction in his Legal Practice Course (LPC).

His knack for rightful leadership and purposeful governance in Nigeria made him nurse a fervent interest in politics, as far back as the days he was Vice President of the African-Caribbean Society in the University of Birmingham, and during his time as the Principal Private Secretary to the Governor.

His brand of politics and unusual style of political campaign was seen as a breath of fresh air. His campaign tagline, “EJEKASEYI”, translated “Let’s do this together”, bore the entire essence of his agenda which was tagged people & issue-based by the media.