PROF IKOROK RANKS MOST PERFORMING BOARD CHAIRMAN IN AKS 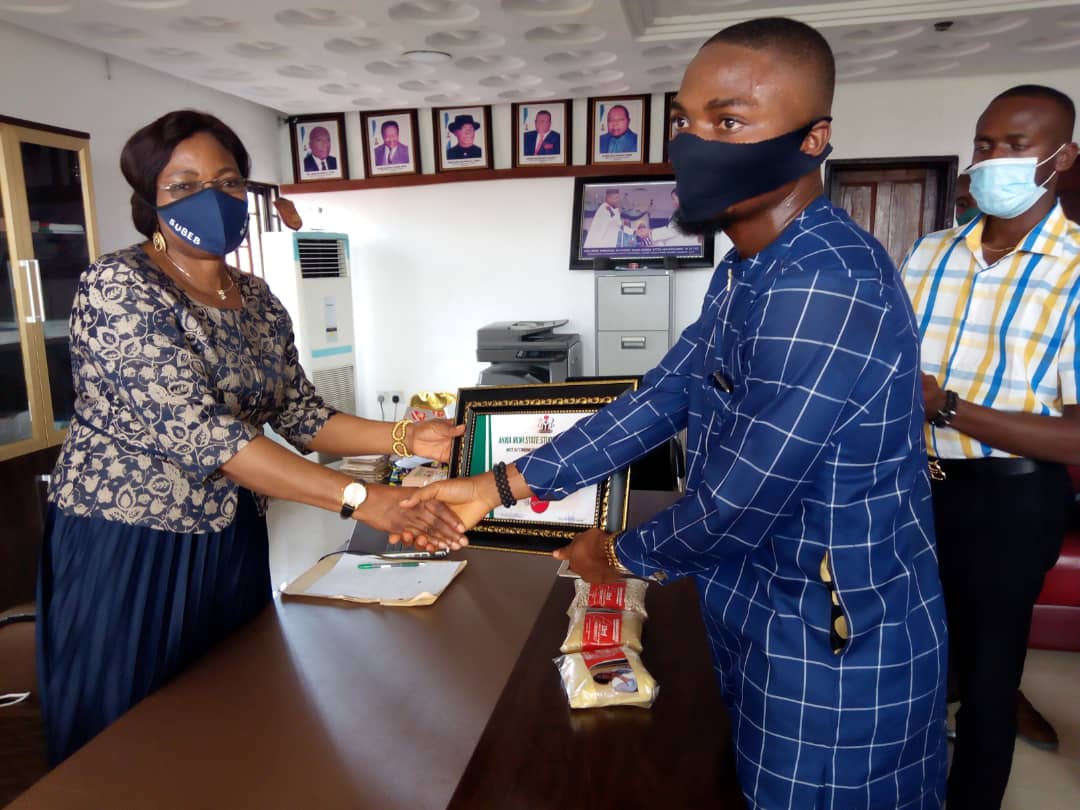 The Executive Chairman of the State Universal Basic Education Board (SUBEB), Prof. Maria Ikorok has been ranked the most performing Board Chairman in Akwa Ibom State.

The honour was conferred on her by the 7th Assembly of Akwa Ibom State Students Parliament led by its Speaker, Comrade Idongesit Okon during a courtesy call on the Board last Monday in Uyo.

Receiving the award, the Executive Chairman of the State Universal Basic Education Board, Prof. Maria Ikorok said she was elated to have been so recognised by the students’ body and applauded the students for challenging themselves early enough to assume positions of repute.

Prof Ikorok remarked “not all have realised that as students, they should contribute to the society by thinking about others, with this noble idea to be conceived by you, it gives us hope that the future of our State is assured. I urge you to sustain the tempo”.

While congratulating the leadership of the students’ Assembly on the assumption of their offices as well as the ingenuity to develop COVID-19 Intervention Project, she expressed confidence that they have modeled themselves in line with the legacies of the Governor Udom Gabriel Emmanuel led administration in the State by showing a pathway for others to follow.

The Don who commended His Excellency Governor Udom Emmanuel and Wife, Her Excellency, Dr. Martha Emmanuel for giving them platform to serve, applauded the students for all the activities they have so far embarked upon.
According to her, the State Government places high premium on the Basic Education sub-sector, as evidenced in the timely payment of the counterpart fund for the UBE Matching Grant Intervention Projects, which facilitate the provision of infrastructure in basic schools, such as construction of new school blocks, rehabilitation of dilapidated structures, provision of educational materials among other interventions so far carried out by the Board.

“I can confirm to you that Governor Udom has distinguished himself in the up-to-date payment of the counterpart funding, thus ensuring that Akwa Ibom State draw funds up to 2019, which necessitated the publication of tenders in both local and national dailies, for the soon to be commenced year 2019 Opening of Bids to award contracts” she noted.

The SUBEB Boss, maintained that the State Government has gone further to provide statutory records, prompt and regular payment of salaries, capacity development workshops, upgrading and promotion of personnel, among others.

Prof Ikorok recalled that the Akwa Ibom State Government in a couple of weeks ago trained, over 2,000 Basic School Administrators on COVID-19 prevention protocols in centres across the 10 Federal Constituencies in the State; an action which was followed by the distribution of COVID-19 sanitation materials such as sanitisers, buckets, serviette, pails, disinfectant, face masks, and hand washing lotion to public primary schools.

Speaking on the effort made by the Board to ensure strict compliance with COVID-19 protocols, the Chairman revealed that the Board has also embarked on inspection of schools, and made available manual on COVID-19 prevention as well as work ethics for teachers as schools resume.

The Chairman who dedicated the award to Board Members and staff for their cooperation, noted that SUBEB has rejuvenated Agriculture in Basic Schools, to encouraged entrepreneurship in Agriculture, by the recent distribution of farm inputs to public primary schools.

Earlier, while presenting the award, the speaker of the Students’ Assembly flanked by other Executive members of the body said the organisation has carried out an independent appraisal on the performance of all Board Chairmen in the State and has found Prof. Maria Ikorok fit for the owing, to her dedication to assigned responsibilities.

Comrade Okon, explained further that the Students’ body having followed the trend of activities carried out by the Chairman of the Board, is convinced of her being qualified for the outstanding award.

According to him, the joint session of the Akwa State House of Assembly members and Student’s Parliament did not hesitate to accept her nomination for the honour.

He noted that the honour which is intended to spur her and the Board to do more, is for the entire organisation, since the performance is attained through collective effort.

Accompanied by the Chief Whip, Mr. Ime Okon, Mr. Ekong John and other Executive members of Students’ Assembly, the leadership of the group equally announced plans to partner the Board and other organisation in the provision of palliatives (food stuff such as garri, rice, beans) as well as orientation in processing of the food stuff to select schools in the State, so as to cushion the effect of the Covid-19 Pandemic.

Present at the event were Board Member 2, SUBEB, Bishop Ime Ekpe and Board Member 3, SUBEB, Hon. Inibehe Etukudo and some members of staff.