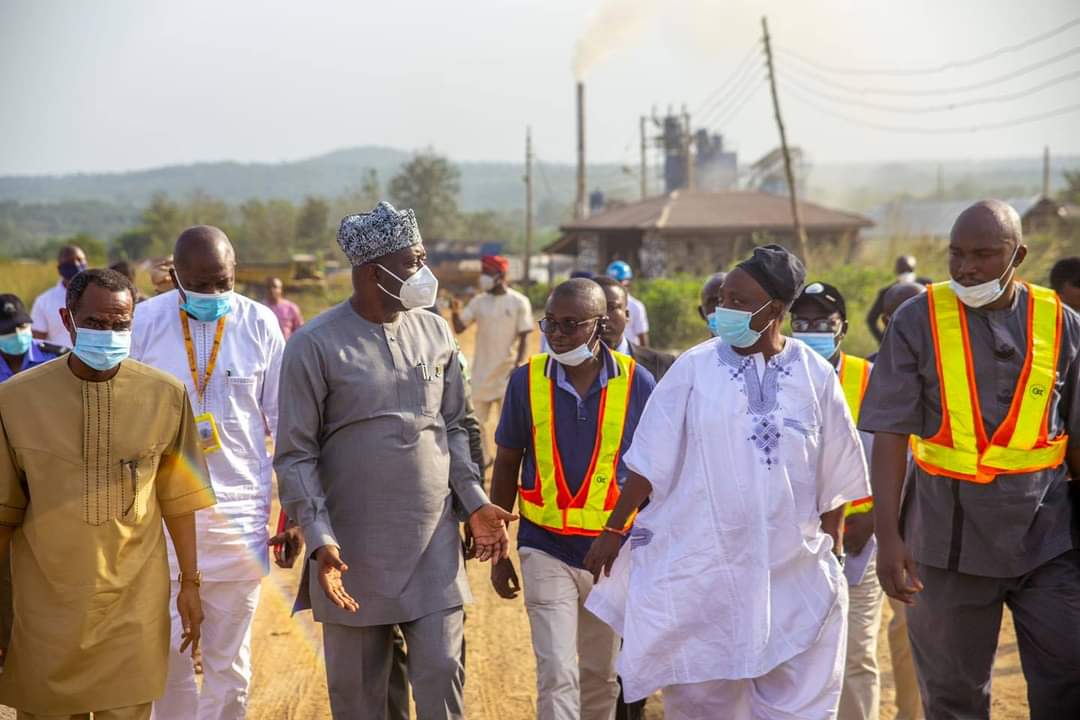 Former Governor of Oyo State, Senator Rashidi Ladoja, has declared that the incumbent governor of the state, Seyi Makinde, is working to fulfil his dream for the state.
The former governor, who spoke alongside Makinde, on Thursday, lauded the administration’s resuscitation of the now operational Pacesetter Quarry and Asphalt Limited, Ijaiye, stating that the effort, which, he noted, will boost the economy of the state, has made his dream for the project and the state come true.
Ladoja, who is also the Osi Olubadan of Ibadaland, stated this during a visit to the asphalt plant in company of the governor, saying that it was heartwarming and commendable that the Makinde administration has brought the plant back to life after it had been abandoned by two successive administrations.
It will be recalled that the state government handed over the Pacesetter Quarry and Asphalt Plant to Carboncor International Technology Limited under a public-private partnership arrangement.
A statement by the Chief Press Secretary to the governor, Mr. Taiwo Adisa, quoted Governor Makinde as saying that the revival of the firm, which is now back to full production, is an indication that the administration’s economic expansion agenda is working.
Makinde, who stated that he was pleased to see that production is ongoing at the plant, said the company is already contributing to the economy of the state by generating revenue, providing jobs and raw materials needed to construct roads.
Speaking with reporters shortly after inspecting the site, Makinde said: “We think our strategy is working and you can see it. They are contributing their own quota to the economy of the state. Yes, we are satisfied so far.
“It is a public-private partnership model. They are fully in charge. They are planning on expanding the facility so that they can do more. We don’t want pot-holes on our roads. So, this will assist us to achieve that objective.”
Earlier, High Chief Ladoja described the now operational plant as a dream come true, berating successive administrations, which abandoned the plant as not being friends of the state, as, according to him, the plant could have helped bring down the cost of road construction materials and also contribute to the economy.
“It is a dream come true. The work of the governor is to dream, get people around him to execute the dream. We dreamt and it came into fruition at that tenure and it was working. So, after I left office, there have been two governors who did not remember that the dream must work.
“Now that this administration came in, and they made it work, what do you think I should do? How do you think I will feel? I am very happy that my dream did not die. I am happy because when we came in to do it, the slogan then was ‘awo o ka’ju ilu’ [resources are not sufficient to take care of things]. So, in order to make ‘awo ka’ju ilu,’ we decided that we had to bring down the cost of materials.
“And, with this project, we were able to bring down the cost of asphalt for the roads. By the grace of God, the price came down and we were able to make more roads during that tenure and the roads are still there for everybody to see.
“For anybody to have abandoned this plant when you know that with this, you can reduce the cost of road making, it means you are not really a friend of the state. But I am very happy this is working again and I can assure you that I will give all my support to them to make sure that this thing continues to work.
“The people in this area are benefitting. The state is benefitting, because the cost of road construction must have gone down. 100 or 200 people are working and getting their daily meals from there. When we are talking about unemployment, this is part of the solution to it.
“I am very grateful to the governor for making sure that it works and I can assure you that I will give support for the continuation of this thing,” Ladoja said.