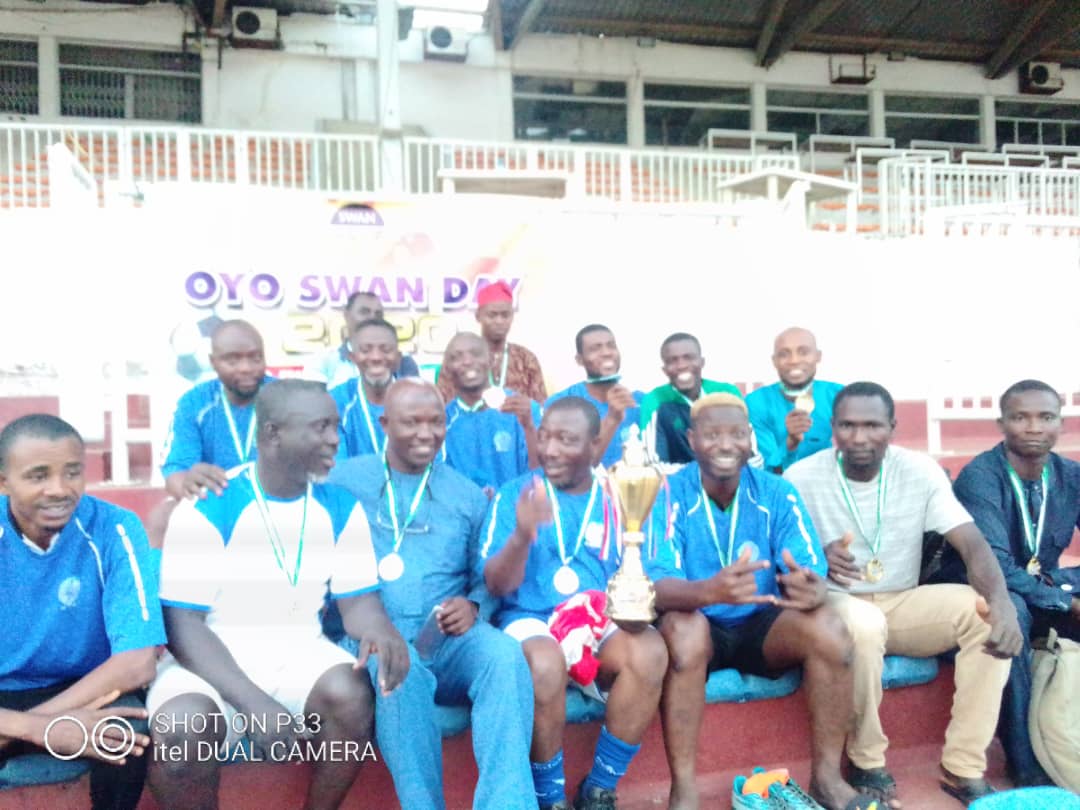 The football team of the Oyo State chapter of the Sports Writers’ Association of Nigeria (SWAN) on Friday used their Ogun State counterparts as celebratory meal to mark their day.

The Pacesetter SWAN mauled their visitors from Gateway State 4-0 in a friendly encounter.

The match, decided at the mainbowl of the Obafemi Awolowo Stadium, was organised to mark the 2020 Oyo SWAN Day.

The build up to rhe game was tense but exciting as the two teams, being regular foes, gave all their best preparatory to the match.

With dignitaires such as the former Chief Press Secretary to the Oyo State Governor Honourable Kehinde Olaosebikan, a former Chairman of Oyo SWAN Mr Femi Okenla and others present to grace the game, all was set for a very thrilling match.

The Ogun State side had stormed the venue with high hopes of winning the game going by their pre match boasting.

However, the coach Femi Amusan tutored Oyo SWAN team, refused to be intimidated by the pre match antics of the visitors from the Rock City.

With top referees from the Oyo State Council of the Nigeria Referees Council (NRA) direcring proceedings, the encounter started with the visitors showiing the flashes of a team going for victory.

Having survived few onslaught’s from the visitors, the host team, captained by Olawale Hamzat got back into the game with Oyo SWAN Chairman Niyi Alebiosu and others taking the game to their opponent.

One of the forays resulted in a free kick near the visitor’s vital area and Olawale Hamzat (Top Striker), who just returned from a trip to Cotounou, Benin Republic, buried the ball to the admiration of the watchers.

Just a minute after the opener, the Ogun SWAN had an opportunity to level up but the effort was denied by the woodwork.

Few minutes after, the Oyo SWAN doubled their lead through Olawale Hamzat who slotted in from the spot after the opponents fouled a Oyo SWAN striker inside the box.

The demolition of the Ogun SWAN was completed in the second half as Kayode Olagunju of Ile Akede Bombers (BCOS) grabbed a brace to end make the scoreline 4-0.

Efforts by Oyo SWAN to add to their goals failed to yield dividend just as Ogun SWAN’s attempts to at least reduced the tally proved abortive.

Medals were later presented to the two team with the winner running away with the trophy.