The 2022 Pen Week of the Nigeria Union of Journalists, Oyo State Council, kicked off today with a church service which held at the Ilaji Resort Chapel, Akanran, Ibadan.

Members of the Union, gathered at the chapel to herald the week-long activities with prayers. 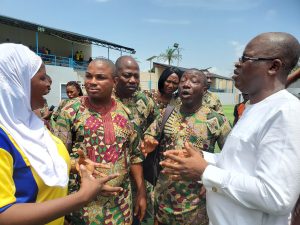 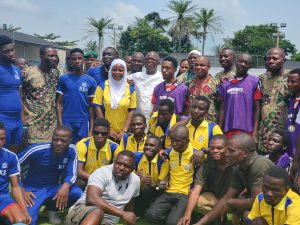 Addressing Journalists during the service, the guest minister and Pastor-In-Charge of Province 13, Redeemed Christian Church of God, Pastor Samuel Awobode charged journalists to sensitize the general public on the importance of voting credible leaders that will move the country forward.

He noted that as watch dogs in the society, Journalists have huge roles to play in the quest to build the nation.

He advised the union to organise press debates for key contenders in the forthcoming general elections, adding that this will encourage voters to know who is the best amongst them.

“Organize press debate, let people come out and tell us what they want to do for us, Nigeria must be liberated. As a pastor, I am apolitical, so I’m a father of all of politicians. I have no favorite”, he said.

Speaking on the theme, Flying above circumstances, Pastor Awobode quoted from 1Corinthians 10:13, admonishing Nigerians not to relent in their day-to-day struggles.

“Jesus is the determining factor in any human’s life”, he said.

Also speaking at the service, the Chairman, NUJ, Oyo State Council, Comrade Demola Babalola appreciated the C.E.O, Ilaji Resorts and hotels, Engr. Dotun Sanusi for the immense benefits the union has derived from him through the year.

He also thanked God for the press week, saying the union has grown in leaps and bounds, over the years.

“Today is a symbolic day as Baba is celebrating another milestone of his age, Otunba Engr. Dotun Sanusi will be celebrating his 54th birthday tomorrow, Engr. Sanusi is an enigma, he is a man that believed in the sovereignty of Nigeria, and he is a great man that believes that wealth must be distributed greatly to the people, Baba Sanusi is a blessing not only to Ibadanland but to the entire Yoruba race.” Ademola said.

In his speech, the Chief Executive Officer, Ilaji Hotel and Resort, Engr. Dotun Sanusi urged Nigerians to be kind and good to their neighbours.

Governor Seyi Makinde who doubles as the union’s Grand Patron will declare the week open. The Theme of the week is ‘Violent Extremisms and The Prospects of the 2023 Election’ and it’s lecture will be delivered by Prof. Isaac Olawale Albert.

On Tuesday 18th October, the union will hold a Walk/Road Show in Ibadan.

According to the Chairman, members will be kitted in customised T-Shirts.

Another Public Lecture on Rescuing Nigeria from its abductors’, will hold on Wednesday 19th October at Dapo Aderogba hall Press Centre Iyaganku by 10am, to be delivered by Dr. Tade Oludayo.

The union will host Veterans’ on Thursday 20th October, while it will give special recognition and appreciation to some past union leaders.

On Friday, 21 October, 2022 Jumat service and Pen and Award Night will be hosted at Felicia hall Jogor Center Liberty road Ibadan by the union.