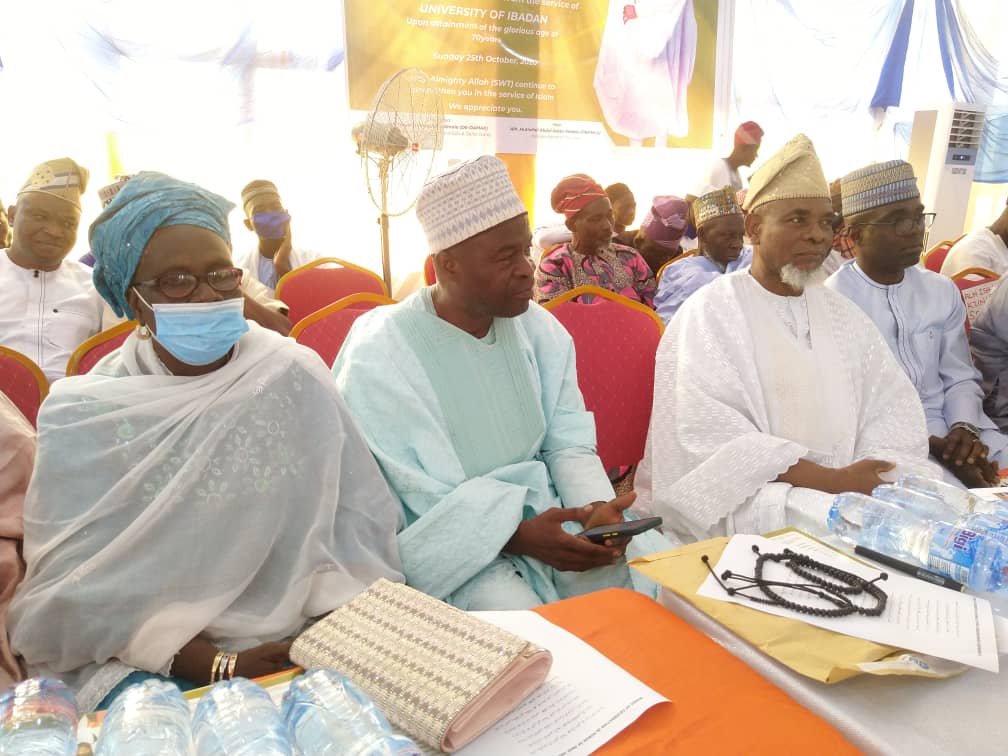 It was a gathering of who is who among Muslims in Oyo State at the prayer reception organised for an educationist, Professor Rashid Aderinoye who just retired from University of Ibadan at the age of 70.
The prayer reception organised by National Council of Muslim Youths Organisations, NACOMYO, Oyo State Chapter was held at Conference Hall of University of Ibadan Central Mosque.
Clerics, political office holders, academics and associates took turn to render encomia on Professor Aderinoye for his selfless service to humanity.
Chairman, Oyo State Muslim Community, Alhaji
Kunle Sanni described Professor Aderinoye as a Jihadist of note, an exceptional man and a reliable fellow who could go to any length to satisfy others.
The sponsor of the programme and Asiwayu Adinni of Oyo State, Alhaji Mutiullah Oladejo (Onimalu) lauded the don for impacting positively on people’s lives.
Alhaji Oladejo who also represented Aare Musulumi of Yorubaland, Edo and Delta, Alhaji Dawud Akinola urged the celebrant not to relent in his efforts in the cause of Allah.
The chairman on the occasion, Alhaji Qomorudeen Taye-Akande described the celebrant as a motivator and a blessing to Islam.
The Dean, Faculty of Arts, University of Ibadan, Professor Hafis Oladosu likened Professor Aderinoye to sun whose rays of light benefit a lot of people and urged him not to relent on his acts of Godliness.
Professor Kamil Oloso of Department of Arabic and Islamic Studies, University of Ibadan described the celebrant as an epitome of humility, and a disciplinarian with sound human relationship.
Earlier, Coordinator, NACOMYO, Oyo State Chapter, Alhaji Dawood Afolabi said the programme was a token of appreciation to Professor Aderinoye who remained a mentor, benefactor and a role model to Muslim youths.
He described him as an unseen hands behind many successes recorded by the organisation in the recent times.
While appreciating the gathering, Professor Aderinoye said he was marvelled with the various comments and prayed Allah give him the ability to fo more for his service.
Muslim personalities that attended the reception included Executive Secretary, Muslim Ummah of Southwest Nigeria, MUSWEN, Professor Muslih Yahya, Head of Arabic and Islamic Studies Department, University of Ibadan, Professor Wole Abass, a popular Islamic scholar, Alhaji Isa Akindele, the leader of Zumratuh Society, Alfa Ismail Olore as well as former Secretaries to Oyo State Government, Alhaji AbdWaheed Olajide and Barrister Sharafadeen Alli. Others are Professor Ayo Hammed of University of Ibadan, Resident Electoral Commissioner, INEC, Ogun State, Professor Ganiy Raji, Permanent Secretary, Ministry of Environment, Oyo State, Dr Basheer Olanrewaju, and former Chairman, Oyo State Pilgrim Welfare Board, Muslim Wing, Dr Junaid Ogundiran.