Oyo has lost one of its finest, Makinde mourns Late Lere Adigun 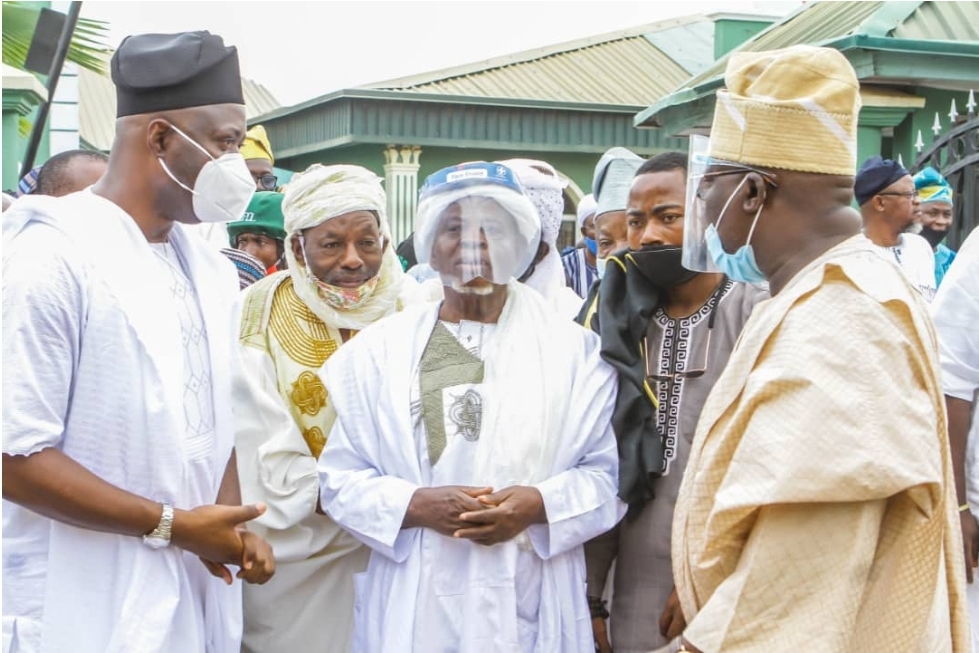 Oyo State Governor, Engineer Seyi Makinde, on Saturday, described the death of the pioneer president of Ibadan Solidarity Group and Chief Executive Officer of Sahara Engineers, Chief Lere Adigun, as a huge loss to the state.

The governor, who was speaking in Ibadan on Saturday at the burial of the business icon stated that the state has lost one of its finest individuals.

According to Makinde,  Engineer Adigun was like a father and confidant to him, adding that the late Aare Ago Aare Olubadan of Ibadanland was a selfless elder who stood by him in times of trouble.

A statement by the Chief Press Secretary to Governor Makinde, Mr. Taiwo Adisa quoted the governor as saying that the late Adigun played the role of father in his life since the demise of his father, Pa Makinde, in 2012.

Makinde, who was speaking at the  Oluyole home of the Adiguns, where Islamic clerics, including the Chief Imam of Ibadanland, Sheik Abubakar Agbotomokekere, Aare Musulumi of Yorubaland, Edo and Delta states, Alhaji Dawud Akinola and other clerics, conducted Islamic prayers for the deceased, called on leaders to emulate him.

The body of Engineer Adigun was later laid to rest at his Eyin Grammar, Molete, Ibadan, home.

Governor Makinde, who stated that Pa Adigun lived a great and selfless life, described how the late engineer gave him 101 per cent support, during his pursuit to become governor in 2015 and, also, in 2019, even when, according to him,  it was glaring that all Ibadan elders were in support of the establishment.

The governor added that his biological father and Pa Adigun were the only two people who could give him an advice and he would not scrutinise, noting that in his one year in office as governor, Pa Adigun never called him for anything personal, but would always call to offer advice and make case for others, who were aware of their relationship.

He urged residents of the state to always comport themselves in a manner that, when they are no longer alive, people could give testimonies about them as it was being done for Pa Adigun.

The governor said: “I thank you Islamic leaders and clerics, the Olubadan and political figures who have taken time to come here today to pay last respect to Engr. Lere Adigun, who has been my father since the demise of my father eight years ago.

“I commiserate with you and his biological children. You are not the only ones who can lay claim to Baba as your father; after I lost my biological father, he has been my father. So, I have lost a father and confidant.

“In my 52 years on earth, there are only two people who can give me advice and I won’t scrutinise it; my father and Chief Adigun. But I have lost the two of them. The same relationship I have with him is what he had for me and it is a similar situation I was in eight years ago, that I am in today. My father died on July 7, 2012, and Baba died on 7 August, 2020.

“When I was told that Baba’s health needed attention, I came to his house and told him, Baba, you have to go to the hospital – though he had told everyone that he wouldn’t go – he told me that whatever I chose, he was okay with it and we took him to UCH so he could have the best of attention. So, we had time to prepare and to reflect on what has happened.

“Yesterday, when I had the call and they used Baba’s number, I knew the news they would give me. I told the people around me that I didn’t want to see anyone after I heard the news. But after three hours, I started asking myself why I was feeling sad. Engr. Adigun lived a good life.

“So, I started reflecting on everything we had done together. He made me develop interest in golf. Baba deserved to be celebrated. He was the chairman of my first Ramadan lecture and subsequent ones. He had been president of Ibadan Foundation. When I approached him that I wanted to be governor, he said he would support me. In 2015 he was with me. In 2019 when all the elders were with the establishment, Baba broke ranks with them and supported me.

“Ever since I became governor, whenever Baba called me, it had never been for selfish reasons. Baba always called me for others, because people who knew the influence he wielded on me always went to him. He was my eyes and ears where I could not reach.

“So, I can say that Oyo State has lost one of its finest and I can only pray that the point Baba reached before he was called to God, God will give us the strength to carry on.

“I also want to advise some of our people who are still living, whatever we do, let us remember a day like this. ‘I want to become this and that’,  death will end it all. Let us live in such a way that when we are no longer there, people will have nice things to say about us the way we are doing about Baba Lere Adigun.”

Earlier in his sermon, the Chief Imam of the Institute of Agricultural Research and Training (IAR&T), Sheik Mamoon Elesinmeta, admonished everyone to remember their last day on earth and what people will say after their demise.

He said the Quran made it clear that human beings were created from the soil and shall return to the soil, warning that no matter the riches, power or influence, human beings must be mindful of posterity and do good so that people can say good things about them.

Similarly, one of the sons of the deceased, Mr. Dotun Adigun, said it is a privilege to be a son of the late engineer, appreciating Governor Makinde for what he stood for to the family and the people of the state.

“There are lots of dignitaries that my dad had a relationship with. He seemed like an ordinary person in the house but he was many things to many people.

“He fought to stay alive, he fought. If he had made it back, every minute would have been spent to serve humanity,” he said, appreciating the Islamic clerics for the roles they played since their father passed on.

Some of the dignitaries who attended the prayers include the representative of the Olubadan of Ibadanland, Oba Saliu Adetunji, Oloye Lekan Alabi; Chief Imam of Ibadanland, Sheik Abubakar Agbotomokekere and his  council; Aare Muslumi of Yorubaland, Edo and Delta states, Alhaji Dawud Akinola; Alhaja Mutiat Ladoja; Commissioners for Education and Special Duties and other government functionaries; Chief Saka Balogun; Engr. Femi Babalola; Chief Bosede Adedibu and Senator Kamorudeen Adedibu, among others.