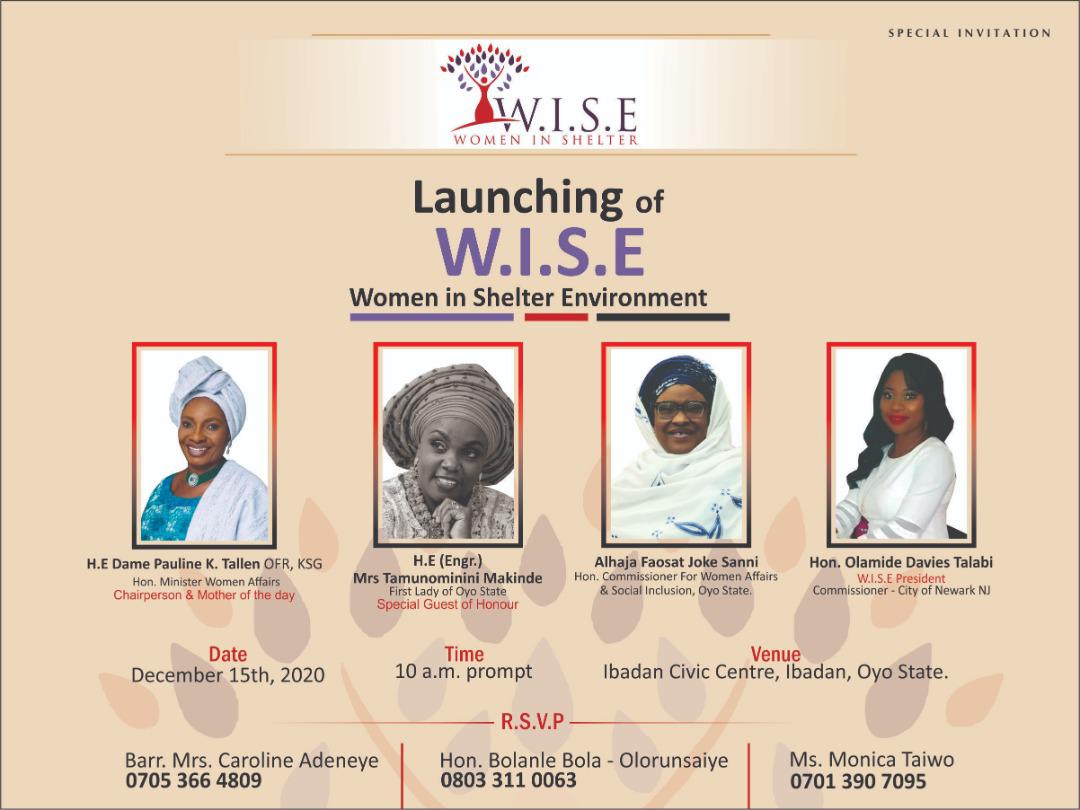 Domestic violence has been a topical issue in the world, over recent times. According to statistics, in Nigeria, 6 out of 10 persons, experience violence and has remained unreported. Sadly, these cases are compounded by traditional and religious practices.

This no doubt informed the creation of a shelter home named Women in Shelter Environment, (W.I.S.E), by a Diasporan, Hon. Olamide Talabi Davies to protect the rights of survivors of domestic violence in Oyo state.

At the event, the Oyo state Government through the Ministry of Women affairs and social inclusion, Office of the Senior Special Assistant on Diaspora Affairs and Ministry of Justice pledged to support the laudable initiative.

The SSA on Diaspora, Mrs. Bolanle Sarumi-Aliyu described the initiative as timely and much needed intervention at this particularly challenging time.

Wife of the Executive Governor of Ogun State, Mrs. Bamidele Abiodun, while speaking at the grand opening of the Shelter home, pledged her support to W.I.S.E in affecting lives of the physically abused persons in the society.

She made this revelation during the launch of Women in Shelter Environment in Ibadan, Oyo state Capital yesterday.

Mrs. Abiodun commended Hon. Olamide Talabi saying, “we are witnessing a renewed commitment against domestic violence in any form in our country. One of such commitment is the launch of W.I.S.E.”

She hinted that a proper rehabilitation of the victims is a first step to recovery, noting that W.I.S.E is set to provide a means for this through professional counselling, empowerment and vocational training.

Mrs. Abiodun added that victims of abuse need a place where they can feel safe and heal outside of their abusive environment, without fear of stigmatisation, criticism or recurrence. This is what WISE seeks to provide.

She said, “when this healing process is managed by trained professionals, then we can be sure that we are releasing whole women who will contribute meaningfully to society”.

The Ogun State Governor’s wife commended the efforts of W.I.S.E for such laudable course, which she said is worth emulating, adding that initiative such as this is a must-have in the society for peace and sustainable development.

Abiodun called for the expansion of the project to other parts of the country, especially Ogun State, where Hon. Olamide Talabi Davies hails from.

She urged women to remain focused in the good works they are doing, adding that, their labour would not go unrewarded.

She urged women facing abusive relationships to speak out, as the State Government would partner with W.I.S.E to put a stop to domestic violence in the state.

She hinted that the 50-bed shelter home is for women who are in their rock bottom in their marriages, and would be a safe haven for women to stay, while they undergo psychiatric therapy, medical attention and vocational training.

The President stated that, her organisation is a charitable non-profitand Non-Governmental Organization (NGO) that intends to contribute immensely in reducing poverty and violence against women in the society, adding that the generosity of the organisation would touch women empowerment through Skill Acquisition Initiative Programme in every nooks and crannies of Nigeria.

The event was witnessed by domestic violence survivors who shared their experiences and dignitaries from all walks of life.