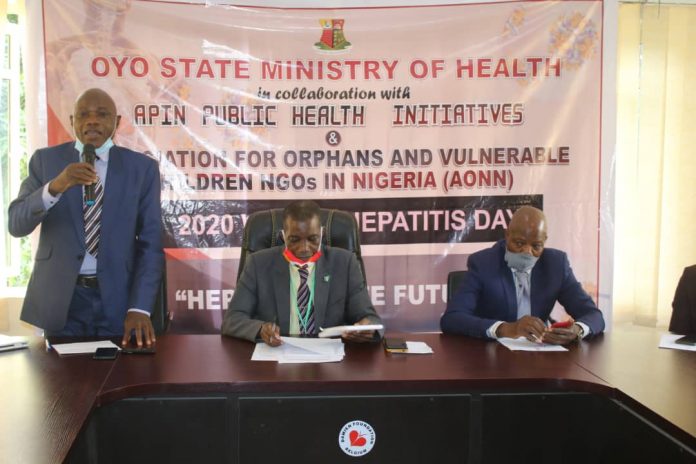 Oyo State Government has raised its awareness Campaign on Hepatitis as parts of her preventive measure to reduce Hepatitis cases to bearest minimum.

The Oyo State Commissioner for Health, Dr Bashir Bello stated this on Tuesday, while addressing newsmen in Ibadan, in commemoration of the 2020 World Hepatitis Day, adding that preventive aspect of health care is of top priority in the agenda of the Governor Seyi Makinde led administration.

The Commissioner added that the awareness campaign was in collaboration with APIN Public Health Initiatives and Association for Orphans and Vulnarable children NGOs in Nigeria (AONN).

The World Hepatitis Day is celebrated annually on July 28, to create awareness of the problem of viral hepatitis; an inflammation of the liver that causes a range of health problems, including liver cancer.

According to the Commissioner, the awareness was to create an opportunity to educate people about the burden of the infections and what people need to do to prevent them from being infected .

“Viral group of infectious diseases known as hepatitis A, B, C, D and E, which affects millions of people worldwide, causing both acute(short term) and chronic (long term) liver disease”

He noted that deaths from hepatitis were increasing, unlike tuberculosis and HIV that have been declining.

Bello said the state government in collaboration with technical partners such as UNICEF and WHO, was providing financial and technical assistance to immunization programs so as to decrease the burden of hepatitis B infection.

He added that the ministry had organised awareness campaign to serve as a means of public enlightenment and sensitization among women, men and youths in the state,” this is to further bring these interventions into focus”

He added that testing would also be conducted at Ibadan North Local Government for pregnant women and women of reproductive age.

He asserted that all these efforts would prevent hepatitis in the new generation and find the missing millions.

The Commissioner encouraged all stakeholders in the fight against viral hepatitis to work closely as a team towards improving community awareness on different forms of hepatitis and how they were transmitted and to also strengthen prevention.

He further tasked the stakeholders to ensure wide spread screening and linkage to care “which is the most important gap to be addressed in order to achieve the global elimination goals by 2020.”

The duo , emphasized on the need to embrace testing , compliance to save sex and sharing of objects by individuals to prevent the spread of hepatitis in the community .

One thought on “Oyo Govt launches Awareness On Prevention of Hepatitis”