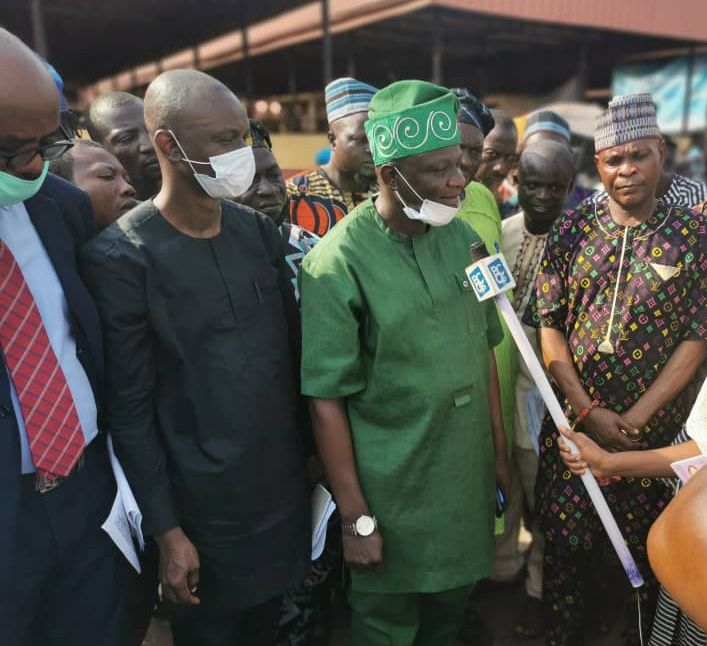 Oyo State government has flagged-off the ‘Oja-Agbe’ Farmers Association in its bid to provide a conducive platform for the economic turnaround for traders and agricultural investors in the State.

The Commissioner for Trade, Investment and Cooperatives, Hon. Adeniyi Adebisi stated this while flagging off the “oja-agbe” market at the Scout Camp Neighborhood Business Complex, Challenge, Ibadan on Thursday.

Adebisi stated that the Governor, Engr. Seyi Makinde-led government would leave no stone unturned in making life more comfortable for farmers economically and socially, towards marketing their farm produce, which necessitated the government to release a significant number of open stalls in the Scout Camp Neighborhood Business complex at no cost to the “oja-agbe” Farmer’s Association in the State for the next one year.

At the instance of the Governor, according to Adeniyi, repairs were made in the complex to make commercial activities conducive in such areas as reconnection of electricity to the market, purchase of standby generator, repair of blown off roofs and the two existing boreholes in the market while approving the creation of Amotekun office in the complex for security of lives and properties.

The Commissioner therefore enjoined the leadership of”oja-agbe” Farmer’s association in the State to reciprocate the good gesture by selling their produce at a cheaper rate in comparison to retailers and support the programs of the State Government to take the people of the State from poverty to prosperity.

Adebisi called on other traders selling by the road side along Challenge, Molete and Mobil axis to return to the Scout Camp neighborhood business complex where adequate infrastructural facilities have been provided by the Government for their use.

“With all these facilities in place, we can see that traders that have been displaying and selling their wares by the roadside have no reason to do so anymore, we urge them to quickly make use of this opportunity of getting spaces here and trade with human dignity.

“The present administration will leave no stone unturned to make sure that food security is made a priority and our people who consume will get the products fresh and affordable, while farmers and traders in farm produce would maximize the concept of ‘Oja-Agbe’ to improve their socio-economic power.”

In his remarks, the Chairman, Oja Agbe Farmer’s Association of Oyo State, Mr Muraina Olaleye appreciated the Engr. Seyi Makinde for giving out 50 open shops to the farmers for free use over a period of one whole year.

Olaleye appealed to his members to use the opportunity given to them for their advantage and take agriculture back to its position as it was in the 1960s when agriculture contributed largely to Nigeria’s National Gross Domestic Product (GDP).