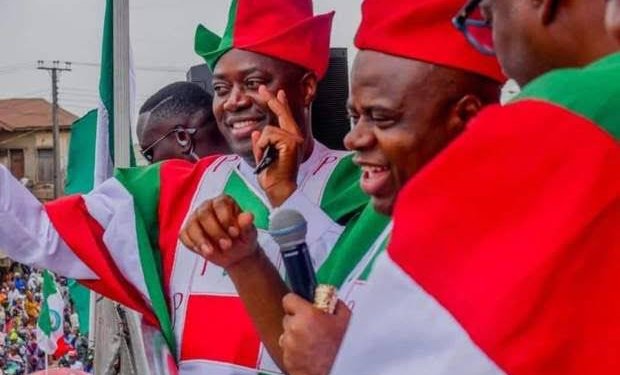 *With him, voters can’t get free, fair election

*Calls on international community to call INEC to order

The National Campaign Council of the Peoples Democratic Party (PDP),  for the October 10, 2020, governorship election in Ondo State, has rejected the appointment of Professor Eyitope Ogungbenro Ogunbodede, the Vice-Chancellor of the Obafemi Awolowo University, Ile-Ife, as the Chief Returning Officer for the election.

Chairman of the Campaign Council, who is also the Governor of Oyo State, Engineer Seyi Makinde, who addressed newsmen in Akure on Thursday, raised the alarm, declaring that the people of Ondo State could be shortchanged if Ogunbodede is allowed to serve as the Returning Officer.

He said that the VC is a crony of the Governor of Ondo State, Arakunrin Rotimi Areredolu (SAN), adding that such a situation cannot guarantee a free and fair election.

According to him, there appears a high plot to sabotage the will of the voters in the state by ensuring that they do not get a free and fair election.

A statement by the Chief Press Secretary to Governor Makinde, Mr. Taiwo Adisa, quoted the governor as saying that the appointment of Ogunbodede, a crony of the incumbent Ondo State Governor, who is also the standard-bearer of the All Progressives Congress (APC), will compromise the election.

Besides being a crony of the Ondo State governor, Ogunbodede equally hails from Owo town, the governor added.

Makinde called on INEC to replace Prof. Ogunbodede as Chief Returning Officer with a neutral individual, adding that such a sensitive position must be held by someone who has no affiliation with any of the parties in the election.

The PDP National Campaign Council also declared that Professor A.S. Bamire, the Deputy Vice-Chancellor (Academic) of the Obafemi Awolowo University, Ile-Ife, who conducted the training for returning officers, is not a neutral party for the purpose of the election.

The statement also indicated that the governor called on all lovers of democracy around the world to be alert to the machinations of the APC-led Federal Government to rig the Ondo State governorship election.

The campaign council urged the United Nations, the European Union, the United States of America and the United Kingdom and all lovers of democracy to call INEC to order, stating that it is already compiling names of all actors and would not hesitate to recommend the same for visa ban based on their actions and inactions in Saturday’s election.

Makinde said: “All the hard work and support that we have provided for our candidate, Eyitayo Jegede (SAN), who will help us reclaim Ondo, comes down to one date, the 10th of October, 2020.

“However, it has come to our notice that the people of Ondo State will not be getting a free and fair election if the Independent National Electoral Commission (INEC), as presently composed, will be overseeing the election in Ondo State.

“We are speaking in particular about the appointment of Professor Eyitope Ogungbenro Ogunbodede, the Vice-Chancellor of the Obafemi Awolowo University, Ile-Ife as the Chief Returning Officer of the Ondo State governorship election.

“The PDP totally rejects Prof. Ogunbodede, who is acting as the Chief Returning Officer. The reasons are very clear. He is a known crony of the current governor of Ondo State, who is also the candidate of APC, Governor Rotimi Akeredolu (SAN). He hails from Owo, the same hometown as the candidate of the APC. He cannot be a fair party in the proceeding by the virtue of their association.

“We also want to state that Professor A.S Bamire, the Deputy Vice-Chancellor (Academic) of the Obafemi Awolowo University, Ile-Ife, who conducted the training of returning officers, is not a neutral party for the purpose of this election.

“We, therefore, call on INEC to stay true to their names and replace Professor Eyitope Ogungbenro Ogunbodede with a disinterested party. The Chief Returning Officer should have no affiliations with any of the participating parties in the election.”

“We call on the United Nations, European Union, United State, and the United Kingdom and, indeed, and indeed, all allies of democracy, to call INEC to order.

“We are compiling the names of the people involved in there and I believe those people will be good candidates for the visa ban, because if they try to rig this election and they stay here with us, then we will reach out to them after the election to either say thank you or show them what it is if they allow themselves to be used to deny the people of Ondo State the free will to choose their leader.”

The governor commended security agencies in Ondo State for doing well so far, warning, however, that they should not allow themselves to be used as tools to subvert the will of the people.

He further said: “We call on all security agencies in Ondo State not to allow themselves to be used as a tool against the will of the people.

“So far, they have done very well. So, we take this opportunity to commend them for what they have done so far. But we still have a long way to go. Until we see to the end of this process and a governor-elect is declared, it is going to be eternal vigilance for us. So, we urge the security agencies to still do more.

“Please, don’t forget that history and posterity have never been kind to people who allow themselves to be used as a tool for injustice. We urge our security agencies to read the mood of the people and act accordingly.

“Well, politicians, I am one, will come and go, but the people will always remain; and our state and our country will remain. And everyone should remember the world is watching us.”