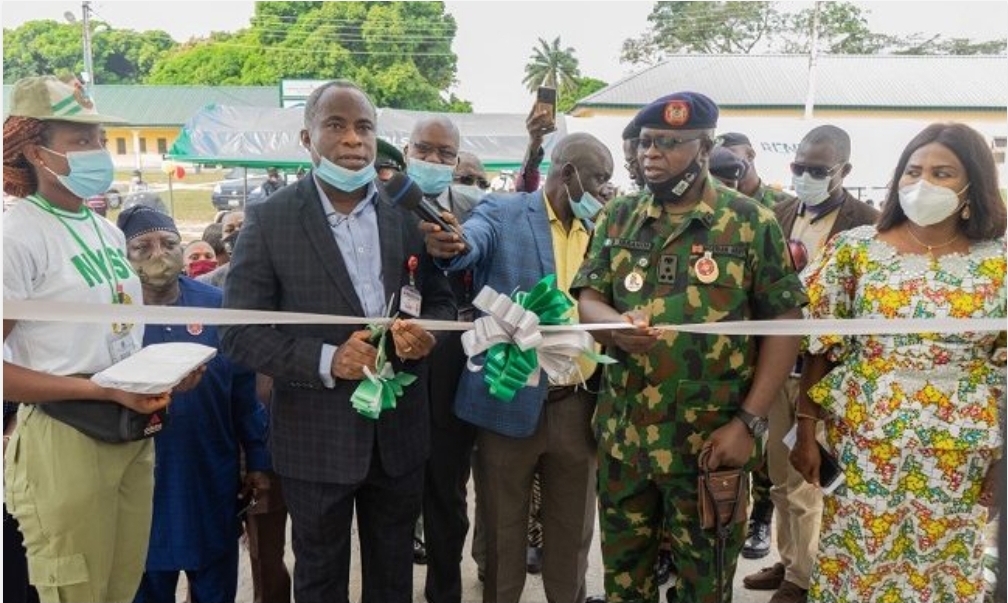 In a bid to increase the healthcare services provided for corps members and staff of the National Youth and Service Corps (NYSC), Director General of the scheme, Brigadier General Shuaibu Ibrahim, on Monday, December 7, unveiled an ultra-modern medical centre at the NYSC Permanent Orientation Camp Iseyin, Oyo State.

Commissioning the new medical centre, Brigadier General Ibrahim explained that the project was in line with the NYSC commitment towards providing proper health care services for corps members as well as offering host communities health services through the NYSC Health Initiative for Rural Dwellers programme.

The medical centre which was donated by the Federal Ministry of Health through the University College Hospital (UCH) is the first of standard medical facilities to be constructed in all orientation camps across the country.

The NYSC DG further disclosed that in addition to providing health services for corps members and staff of the NYSC scheme, the new medical centre would also serve as training grounds and practical learning opportunity for corps members in medical-related fields.

He also expressed his gladness towards the attitudes of corps members across the country referring to them as a patriotic and valuable part of the society and noting that corps members were impactful during the fight against COVID-19.

“Recently, our youths on national service rekindled the nation’s confidence in the continued relevance of the scheme through their contributions to the fight against COVID-19.

“Communities across the states of the federation benefited from their donations which include face masks, hand sanitisers, liquid soap, automated handwashing machines, among other items,” he noted.

Similarly, Professor Abiodun Otegbayo, the Chief Medical Director, University College Hospital (UCH) Ibadan, said the medical centre was created out of the idea to build one in every state of the federation.

While adding that he was glad about the completion of the project, he further explained that Oyo State was selected among the six states picked in each geopolitical zones as pilot centres for the project.

Dr Otegbayo also noted that the clinic would serve a great purpose to the NYSC scheme emphasising the University College Hospital readiness to provide assistance anytime it’s called upon.

Expressing her excitement with the new medical centre, Mrs Grace Ogbuogebe, the NYSC state coordinator, Oyo State stated that the clinic would go a long way in improving the health care services for corps members and camp officials during orientation programmes.

“The provision of this ultra-modern medical centre has enhanced our capacity to accommodate more corps members in subsequent orientation programmes as plans are now in motion to convert the former clinic to hostel blocks,” she added.