National leadership of the Nigeria Union of Journalists has taken a swipe at the Zamfara state Government for shutting down some Media houses.

The Union’s President, Chris Isiguzo called on Zamfara State Governor, Bello Matawalle to forthwith rescind its decision to shut down media organisations in the State.

“We call on the Zamfara State Security Council, headed by His Excellency, Governor Bello Muhammad Matawalle to forthwith rescind its decision to shut down some media organisations in the State”, he said.

In a radio broadcast yesterday, the Commissioner of Information in the State, Ibrahim Dosara said that the affected media organisations, NTA, Gamji TV, Umma TV and Pride radio (FM) all based in Gusau the State capital had violated their professional ethics.

He accused the stations of attending and covering a political rally organised by the Peoples Democratic Party-PDP in the State. 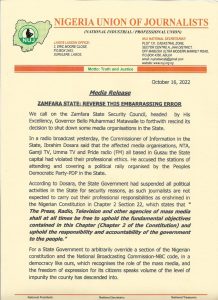 According to Dosara, the State Government had suspended all political activities in the State for security reasons, as such journalists are not expected to carry out their professional responsibilities as enshrined in the Nigerian Constitution in Chapter 2 Section 22, which states that ” The Press, Radio, Television and other agencies of mass media shall at all times be free to uphold the fundamental objectives contained in this Chapter (Chapter 2 of the Constitution) and uphold the responsibility and accountability of the government to the people.”

For a State Government to arbitrarily override a section of the Nigerian constitution and the National Broadcasting Commission-NBC code, in a democracy like ours, which recognises the role of the mass media, and the freedom of expression for its citizens speaks volume of the level of impunity the county has descended into.