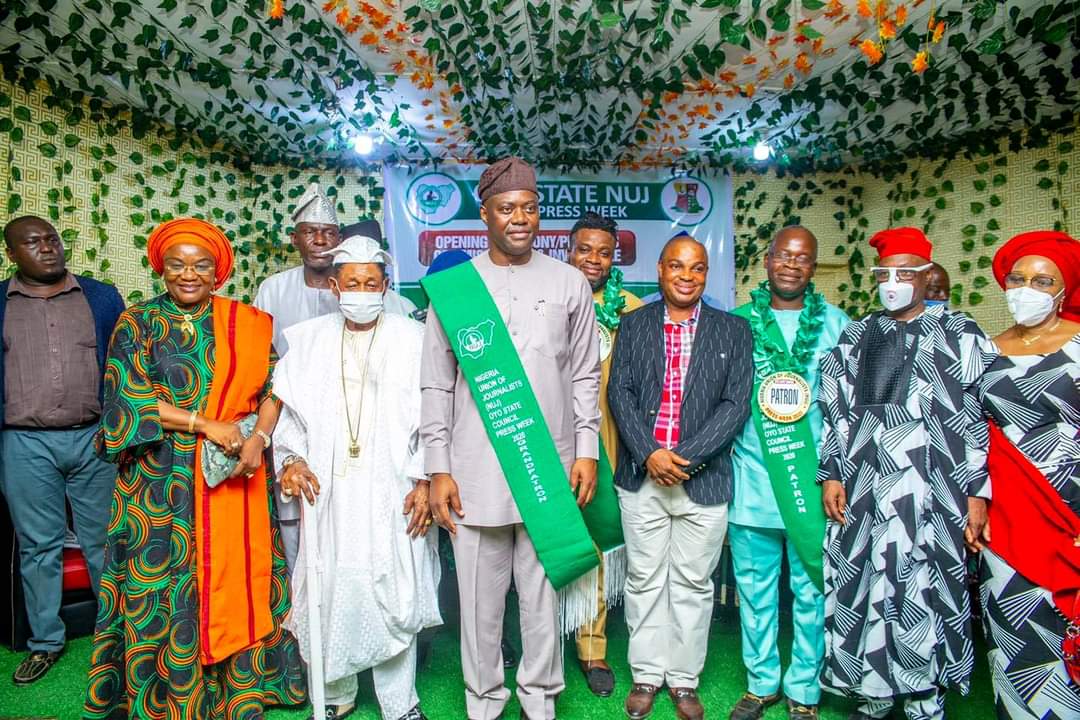 Oyo State Governor, Engineer Seyi Makinde, on Monday, warned of an urgent need for Nigeria to change course or risk greater danger, security-wise.
The governor noted that recent occurrences including the #EndSARS protests have given clear indications that Nigeria needed to change its course.
Governor Makinde, who stated this at the Dapo Aderogba Hall, of the Nigeria Union of Journalists(NUJ) Press Centre, Iyaganku, Ibadan, while declaring open the 2020 Press Week, maintained that if the country refuses to change its course on the state of security, “no one will be spared.”
A statement by Mr. Taiwo Adisa, the Chief Press Secretary to Governor Makinde, quoted the governor as saying that journalists have a great role to play in the development of the country, urging them to discharge the duties with professionalism and a strict sense of responsibility.
The statement added that the occasion also witnessed the investiture of Makinde as the Grand Patron of the State chapter of the NUJ.
The governor said: “I believe some of you journalists here covered those events [hijacking of the #EndSARS protests and looting] and can tell the stories first hand. If there is one thing you took away from that #EndSARS event, it is that no one is really safe if Nigeria continues to travel the current path.
“If we continue on this path, no one will be spared. So, we have to make up our minds that we need to change course. Therefore, everyone has a role to play in bringing about development in our country.
Makinde equally advised journalists against yellow journalism and fake news.
He promised to support the building of a Journalists’ Estate in Ajia, Ibadan, while also pledging to gift the union a brand new bus before the year runs out.
Addressing the theme of the Week, which is “Journalists and the Development of Underdevelopment in Nigeria,” Governor Makinde hinted that pressmen have a lot to do in the development of the country, warning, however, that they must discharge the duty of informing the population with responsibility.
He explained that the theme of this year’s Press Week is timely, noting that global events in the year 2020 have exposed the need for development in the underdeveloped world, even as he admonished them to discuss ways to achieve the needed balance for national development.
“The theme you have chosen for this year’s engagement is quite timely. Global events in the year 2020 have further exposed the need for development in the underdeveloped world.
“When the COVID-19 pandemic was first identified as a worldwide threat, public commentators were worried about the impact the pandemic would have on African nations. Our poor healthcare and sanitation systems seemed to point to higher levels of devastation than in the developed world.
“So far, a combination of factors has minimised the overall medical impact of the pandemic on our continent. We have had fewer reported deaths than in other parts of the world. However, we could not dodge the economic consequences, which is partly why Nigeria is facing another recession in the third quarter of 2020.
“The economic effects of the pandemic can also be partially blamed for the level of looting and banditry that followed the #EndSARS protests about a month ago. People everywhere were hungry and angry.
“Everyone has a role to play in bringing about development in our country. Of course, no one expects journalists to build roads, hospitals, or provide other infrastructure – that is the primary responsibility of the government. But that does not mean you do not have a role to play. We all know that information is a weapon.
“The meaning of the saying, the pen is mightier than the sword, is not lost on us. So, you journalists can use your pen – or keypads as is more applicable these days – to either develop the nation or destroy it. One wrongly worded headline can spark a crisis or burn down the entire nation.
“You may feel that you can retract a story, but news stories are like oil. You can attempt to wipe the spill but you may never get it all back.
“So, yes, you owe the population a duty to inform them of happenings around them. And you certainly have your role to play as the fourth estate of the realm.
“The press is the watchdog of society, and so when you see something, you are expected to say something. However, you must discharge your duties with every sense of responsibility.”
The Chairman of the NUJ, Oyo State Chapter, Mr. Demola Babalola, while welcoming the governor thanked him for attending the event and for being of tremendous support to journalists in the state.
He said: “The continuous hand of fellowship you [Governor Makinde] have been extending to us for close to 15 years now in NUJ has been unrivalled. I recall your singular donation of a multimillion-naira Laboratory building during the tenure of Comrade Gbenga Opadotun. And of course, your support for me during my first botched effort at becoming chairman in 2016 and the recent one which I overwhelmingly won were noteworthy, sir.”
He appealed to the governor to support the ongoing efforts of the union to provide shelter for the members through a landed property secured in Ajia.
The event had in attendance the Alaafin of Oyo, Oba Lamidi Olayiwola Adeyemi III; Senator representing Oyo South District, Dr. Kola Balogun; the Senator who represented Oyo Central District and a former Speaker of Oyo State House of Assembly, Senator Monsurat Sunmonu; Chairman, Ilaji Hotels and Resort, Chief Dotun Sanusi; Dr. Oludare Akande, and many government functionaries.