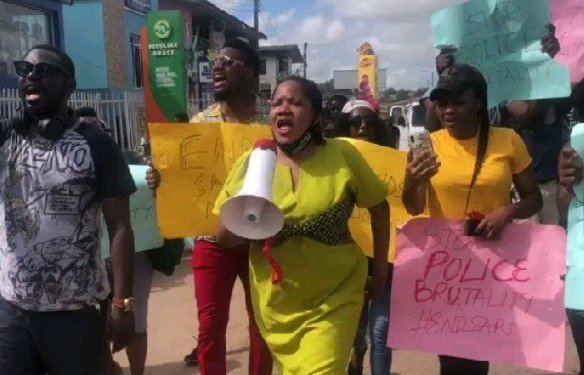 According to the Cable, this may be coming on the heels of attack by her followers, who accused the filmmaker of promoting ‘Fate of Alakada’, her new movie, amid the demonstrations against brutality of the police unit.

In a series of video clips on her social media handles, Toyin Abraham was seen with a megaphone chanting the slogan “End SARS”.

She also referred to herself as “agent for change and destiny implementer,” while condemning the brutality and extrajudicial killings of Nigerians by the police unit.

“I am more than my movies, I am an instrument for change and a destiny implementer. You can do this. Love you all. #EndSARS,” she wrote on her social media handles.

The renewed protests against SARS started last Saturday after a video showing a man allegedly gunned down in Delta by its officials went viral.

Frank Mba, spokesman of the police, had earlier maintained that SARS cannot be scrapped as the unit remains crucial to tackling crimes in the country.

“What we need to do is to reform SARS and make them responsive, responsible and make them to work in accordance with laid down procedures,” he had said.