My mother’s discipline made me what I am today, says Makinde 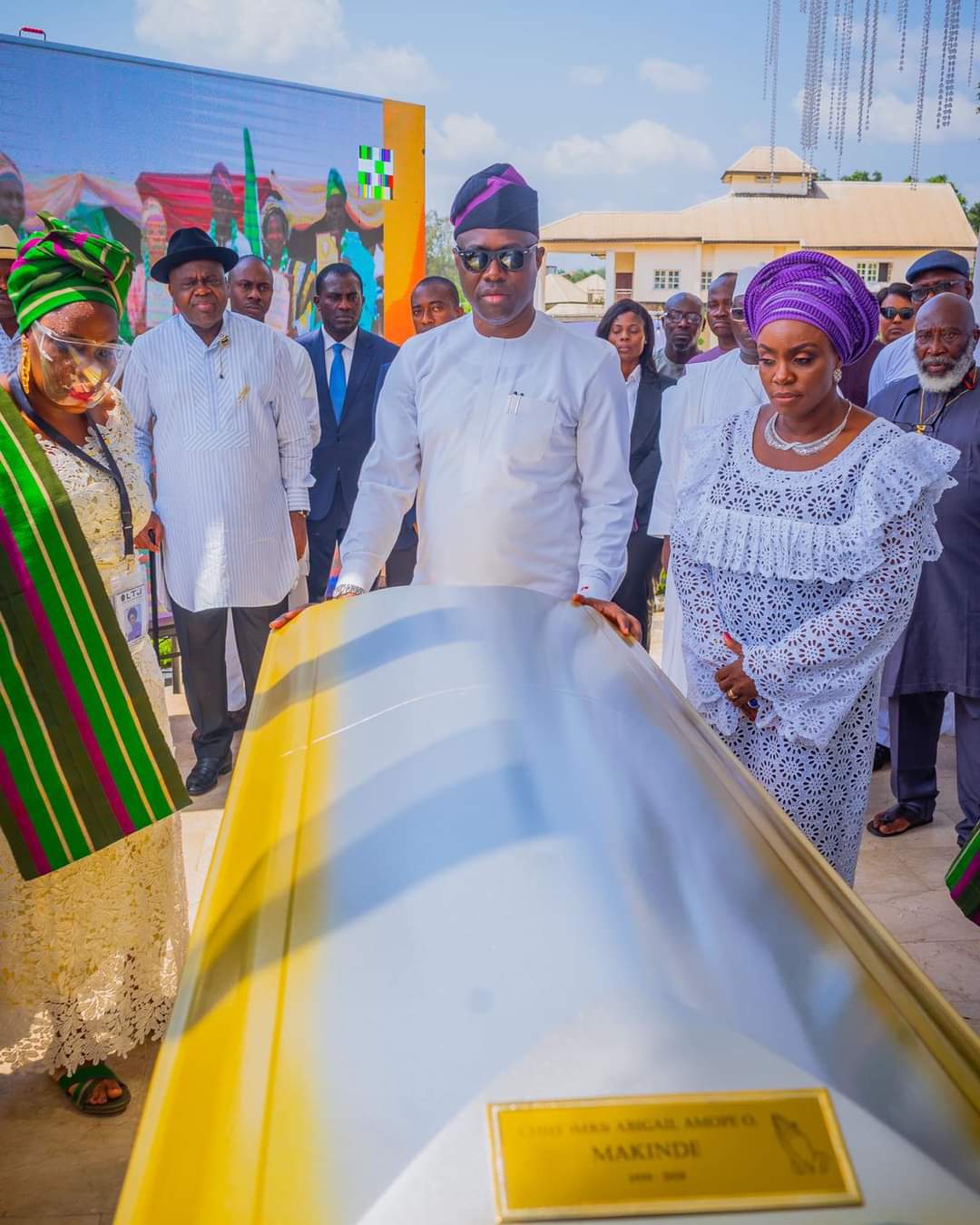 Oyo State Governor, Engineer Seyi Makinde, has described his late mother, Madam Abigail Amope Omojolagbe Makinde (nee Omoregie), as an epitome of love and discipline.
The governor, who was speaking at the funeral service of his late mother, held at the Cathedral of St Peter, Aremo, Ibadan, said that his mother equally epitomizes contentment.
He noted that his mother’s discipline helped him to attain the heights he has attained today, adding that she taught him to love God and to always offer his best gifts to the Almighty.
The governor described his late mother, who passed-on on Thursday, October 15, 2020, as irreplaceable, stating that he would never forget her.
A statement by Mr. Taiwo Adisa, Chief Press Secretary to Governor Makinde, indicated that the governor, while addressing the gathering, which included governors, former governors, serving and former legislators and other dignitaries, said that his mother lived for him and all her children.
While addressing the congregation, Governor Makinde said: “I am here to just pay a tribute to my mother, Mama Seyi. I grew up to know her as Mama Seyi even though I was not the first Child. She lived for me and for all of us.
“Each time she wanted something from me, she would remind me that two of us almost died when she was giving birth to me.
“Mama Seyi, I will never forget you. You taught me contentment. I could only have what you could afford and there was a unique way that Mama would tell me that she could not afford A, B or C.
“Mama, you disciplined me, even though it was tough at that time, it seemed painful because of the so-called tolerance for physical pain. Mama’s discipline made me what I am today. I will forever miss you, Mama.
“I inherited so many traits from you. Some people will say we are stubborn but I will rather say we know what we want and we always go out for it. Thankfully, anything we insist on doing always ends in praise.
“She did not want me to go into politics but I stubbornly refused. But when I became the governor in 2019, after winning the election, she laughed and said I am now the governor’s mother and deserve all the privileges that go with that.
“Mama, you taught me to love God. Her favorite song was the song about Cain and Abel. You taught me to always bring my best gift to God. You said it is how we can appreciate him for his love and protection over us.
“I will always hold those thoughts to my heart. Mama Seyi, you are irreplaceable. Mama, today I chose not to be sad because you have passed away, but I prefer to rejoice. You lived a fulfilled life.
“I shared nearly 53 years of my life with you. I am happy because I will forever treasure the beautiful memories I have while growing up as your son.
“Mama Seyi, this is the celebration of your life. Rest in the bosom of our Lord until we meet to part no more. I love you, Mummy.”
The statement indicated that the event was attended by a representative of the Secretary to the Government of the Federation and state chief executives including Governors Rotimi Akeredolu of Ondo; Kayode Fayemi of Ekiti; Babajide Sanwoolu of Lagos; Ifeanyi Okowa of Delta; Godwin Obaseki of Edo state; Nyesom Wike of Rivers; Udom Emmanuel of Akwa-Ibom; Dapo Abiodun of Ogun State and his wife; Aminu Tambuwal of Sokoto; Adamu Fintiri of Adamawa.
Also in attendance was former governor of Anambra State and PDP Vice Presidential Candidate in the 2019 Presidential Election, Dr. Peter Obi.
Former governors of Oyo State, Senator Rashidi Ladoja and Chief Adebayo Alao-Akala; former Governor Olagunsoye Oyinlola of Osun State, among other dignitaries, were also at the service.
A representative of former President Olusegun Obasanjo, Mrs. Bola Obasanjo, and many other dignitaries also attended the church service, the statement added.
The funeral programme began on Thursday with a lay-in-state held at Governor Makinde’s residence at Agodi GRA, Ibadan, with Bayelsa State governor, Duoye Diri, in attendance, to pay his last respect.
Also held on Thursday was the Service of Songs and Christian Wake, held at the Government House Arcade, Agodi, Ibadan.
In a tribute to his mother during the service of songs, Governor Makinde maintained that the relationship he shared with his late mum was like no other one, saying: “I can only say that it is hard to question God. I thought before we would start talking about Mama going, she should have been 85 but that did not happen.”
The Service of Songs held on Thursday was attended by a former Secretary to the Federal Government, Chief Olu Falae; former Governor Ladoja, Governor Akeredolu; Speaker of the Oyo State House of Assembly, Rt. Hon. Debo Ogundoyin, and the Chief Judge of Oyo State, Justice Muntar Abimbola.
Others in attendance were Aare Musulumi of Yorubaland, Edo and Delta states, Alhaji Dawud Makanjuola Akinola; President, Christian Association of Nigeria, Dr. Olasupo Ayokunle; former Deputy Governor of Oyo State, Ambassador Taofeek Arapaja; Ambassador Yemi Farounbi; Pastor Femi Emmanuel, Archbishop Segun Okubadejo and members of the Oyo State Executive Council.