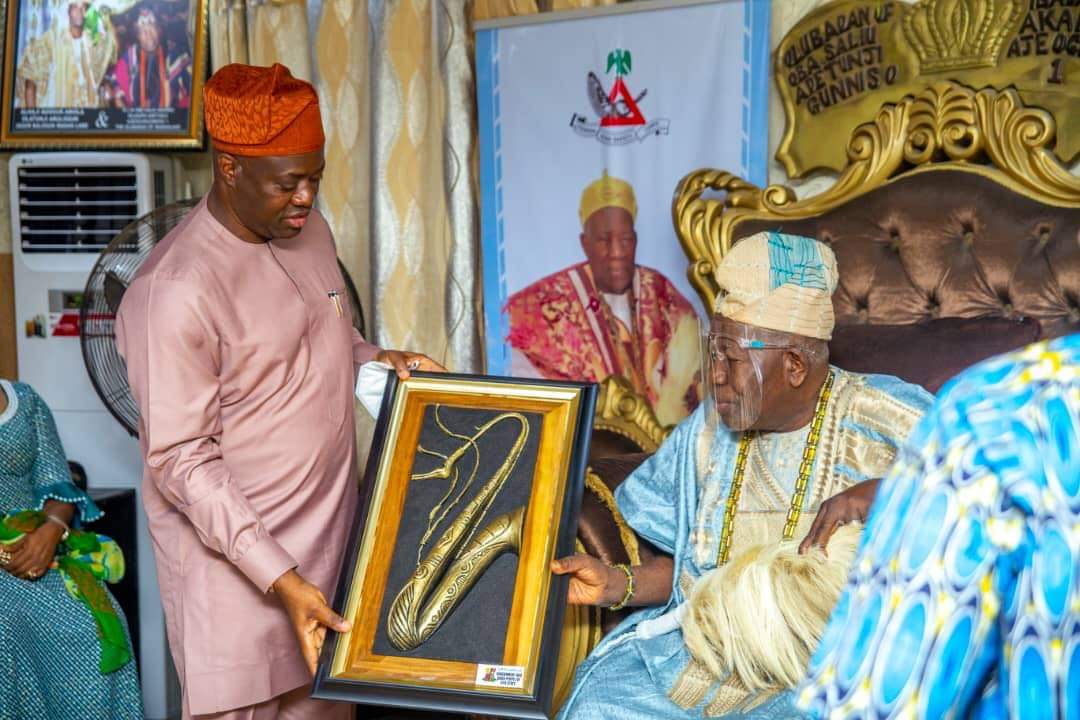 Oyo State governor, Engineer Seyi Makinde, on Tuesday, visited the Olubadan of Ibadanland, His Imperial Majesty, Oba Saliu Adetunji, Aje Ogungunniso I, declaring that his government would continue to accord the traditional institution in the state its due respect.
The governor, who stated this during a courtesy visit to the Olubadan to congratulate him on his 92nd birthday, said that his administration would continue to give all traditional rulers what is due to them.

Governor Makinde, who was on a PDP national assignment to Ondo State during the birthday celebration, gave his backing to the decision by the monarch to appoint the Babaloja of Oyo State.
According to him, his administration will do all that is needed for all the traditional rulers in the state and that as someone with good upbringing, he would never disrespect elders.
A statement by the Chief Press Secretary to Governor Makinde, Mr. Taiwo Adisa, indicated that the governor also urged residents of the state to uphold unity and oneness.
“I want to use this opportunity to appeal to our people to uphold unity. I remember I said during my electioneering campaign that my government would prioritise tackling hunger and poverty. Hunger and poverty don’t know Christians and Muslims. So, let us tell those who want to divide us with religion that they should steer clear and do the right thing,” he said.
The governor further said: “The reason I am here this afternoon is because I was not around when you celebrated your 92nd birthday last week. I was at Ondo State. So, today, I came with a full entourage of government functionaries to specially greet you, and I pray that you will live long by the grace of God.”
The governor maintained that contrary to insinuations by detractors that a rift existed between him and Kabiyesi, there can never be issues between them and if there are, he and Kabiyesi will settle as father and son.
“Those who are fond of peddling negative news about the Oyo State government and what we are doing in the state are saying there is a rancour between Kabiyesi and I. Let me say this again that I was brought up responsibly and I will never disrespect elders. Whoever becomes governor should know that the position expires in four years, and if he wishes to seek reelection, he must come back to tell the people.
“If the people want him, he will be voted for and vice versa. But what about Kabiyesi? Once he ascends the throne, he stays there until he joins his ancestors. So, there is nothing that could have caused a rift between us.
“I want to assure once again, that we will do all that is needed to be done as a government, not only for the Olubadan but also for all our traditional rulers in Oyo State. We will always give what is due to them. If there are issues, Baba can call me and we will settle things amicably.
“Some even said I have not come to greet Baba since I became governor, I think the next time they say so, people should be able to tell them to face their business and leave Baba and me alone,” he said.
While confirming the appointment of the Babaloja of Oyo State, Governor Makinde said: “I want to say here that since Kabiyesi has taken such a decision, it is confirmed by the government as well. So, they should follow the needed due process. Kabiyesi cannot make a decision and we will overturn it.