Makinde to Critics: “We will complete many infrastructure projects in 2021” 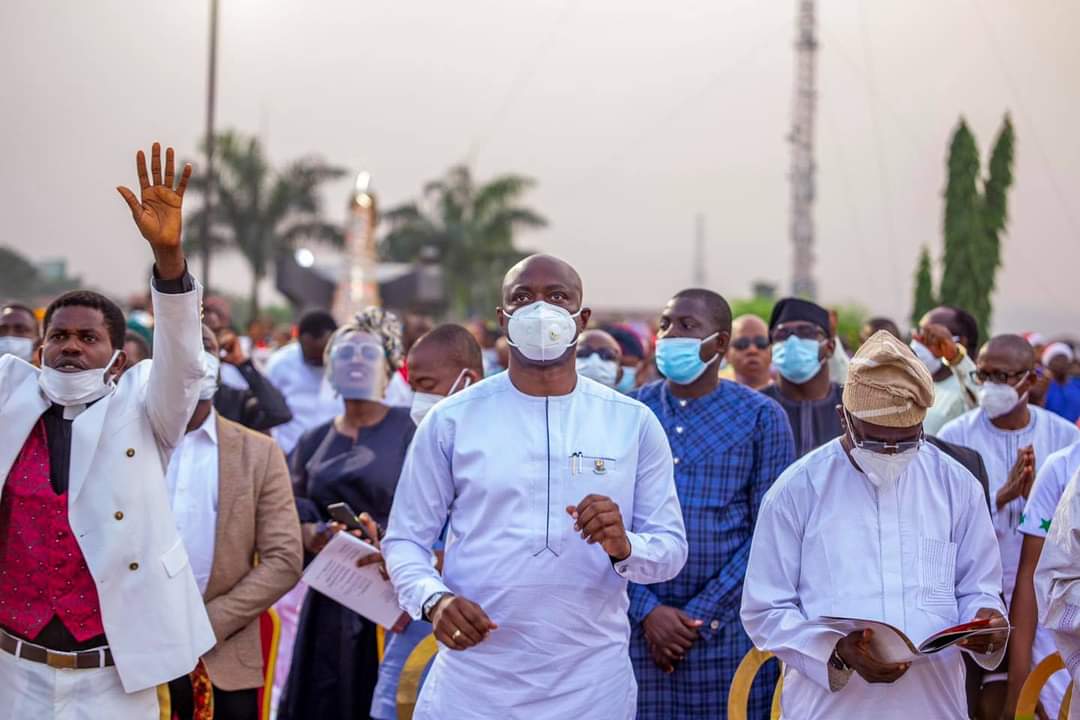 Governor Seyi Makinde of Oyo State has declared that his administration will, in 2021, complete a host of infrastructure projects kickstarted by his government.
The governor, who stated this while speaking at the 2020 Christmas Carol Service and Nine Lessons, held at the Remembrance Arcade, opposite Government House, Agodi, Ibadan, maintained that many roads and other infrastructure development projects embarked upon by the administration will be commissioned in 2021, adding that by then, residents of the state and his critics will see the efforts his government has made to transform the state.
He stated that projects such as Bus Interchanges, Apete-Awotan Road, Saki Township Road, Oroki-Gedu-Asipa Road, Moniya-Ijaiye-Iseyin Road, Akala Way and others will be commissioned in the New Year.
A statement by the Chief Press Secretary to the governor, Mr. Taiwo Adisa, indicated that the governor equally called on residents of the state to intensify prayers for his administration, the state and leaders.
He told the people not to relent in prayers for his administration so that it would succeed in the mandate committed into its hands, adding that by the time the administration begins to commission projects in 2021, those criticising it will see that it has remained committed to its promise to transform the state.
He said: “Please, don’t stop the prayers you have been praying to support us. As the governor, I need prayers. All the cabinet members and the entire Government of Oyo State need your prayers. If you continue to pray for us, I am sure that the Oyo State of our dream will unfold before us.”
The governor promised that the good works already started by his administration will continue in 2021, noting that though there were several challenges in 2020 due to COVID-19 and the subsequent economic recession, God has been good to the state and the administration has been able to lay a solid foundation for the development of the state.
The governor added that his administration will continue to embark on programmes and projects that will take Oyo State from poverty to prosperity through quality health delivery, free education and many others.
He equally declared the government’s commitment to continue to strengthen the security architecture of the state.
“We will keep getting our children off the streets. We will keep reducing the number of out-of-school children in Oyo State, because knowledge is what can set us free. We will keep up with using agriculture and agribusiness to expand our economy. We will keep developing our infrastructure.
“All the roads we are doing; bus terminals, Apete-Awotan road, Saki Township Road, Oroki-gbedu, Asipa Road, Moniya-Ijaiye-Iseyin, Akala Way and junction improvement from New Garage to Apata, will be commissioned in the year 2021.
“By then, our critics won’t be able to call me ‘audio governor’ again, because everyone would have seen the projects I have done to transform the state physically,” Makinde said.
The governor also used the opportunity to appreciate those who supported him during the burial ceremony of his late mother, Mama Abigail Makinde.
Makinde said: “We were here last year and God has spared our lives till this moment. I pray that we will all be here to experience that of next year, 2021.
“This year, I won’t say much because it has been a very challenging year. The COVID-19 pandemic came upon the world in December 2019 and by February, it had gone to all corners of the world, including here in Oyo State. Since February, we have been battling the pandemic and it is still with us.
“In certain parts of the world, we are talking about the second wave, then we had the issue of economic meltdown and there was also a drop in oil price. As if that was not enough, we had the #EndSARS protests. So, the Lord, who has been with us since the beginning of the year till this time, will not depart from us.
“The point I am making is, I am just like any of you. I will make mistakes like any of you. It is only God that is all-knowing and full of wisdom.”
While wishing Christians in the state and the country a merry Christmas, Makinde called on those bent on dividing the state with religion to desist from the act so as not to end up in shame, saying: “Finally, we will ensure that in Oyo State, those who don’t have anything to do other than to divide us with religion will be put to shame. I wish us a merry Christmas.”
Earlier, the pastor-in-charge, C.A.C, Mountain of Mercy, Pastor Isaiah Alade, in his sermon titled “Joy to our generation,” said that joy is the outcome of positive results, saying that Governor Makinde has brought joy to Oyo State.
He also said the essence of Christmas is to reconcile all differences, show love and embrace peace as exemplified by Jesus Christ, urging the people to absorb the virtues of Jesus Christ as the reason for the season.
The first, second and third lessons of the event were read by the Speaker of the Oyo State House of Assembly, Rt. Hon. Adebo Ogundoyin; the President, Oyo State Customary Court, Hon. Justice Aderonke Aderemi; and the Chairman, Pentecostal Fellowship of Nigeria (PFN), Oyo State, Rev.Samson Ajetomobi, respectively.
Also, the seventh and eighth lessons of the event were read by the Secretary to the State Government, Mrs. Olubamiwo Adeosun and the wife of the governor, Mrs. Tamunominini Makinde, while Governor Makinde read the ninth lesson.
Special prayers for widows, the state, first family, the State House of Assembly, civil servants and Nigeria, were conducted by Pastor Benjamin Akanmu, Dr. Sunday Ola Makinde, Most Rev. (Dr.) Olusegun Okubadejo, Arc. Gabriel ‘Leke Abegunrin, Prophet Ojo Olowere and Prophet Samuel Abiara.
Among those present at the service were Bishop Taiwo Adelakun, Pastor Femi Emmanuel, Pastor Francis Wale Oke, Evang. (Dr.) Bola Are, Evang. Funmi Aragbaiye, Rev. Dr. David Moradeyo, Most Revd. Dr. Joseph Akinfewa, members of the state executive council and traditional rulers.