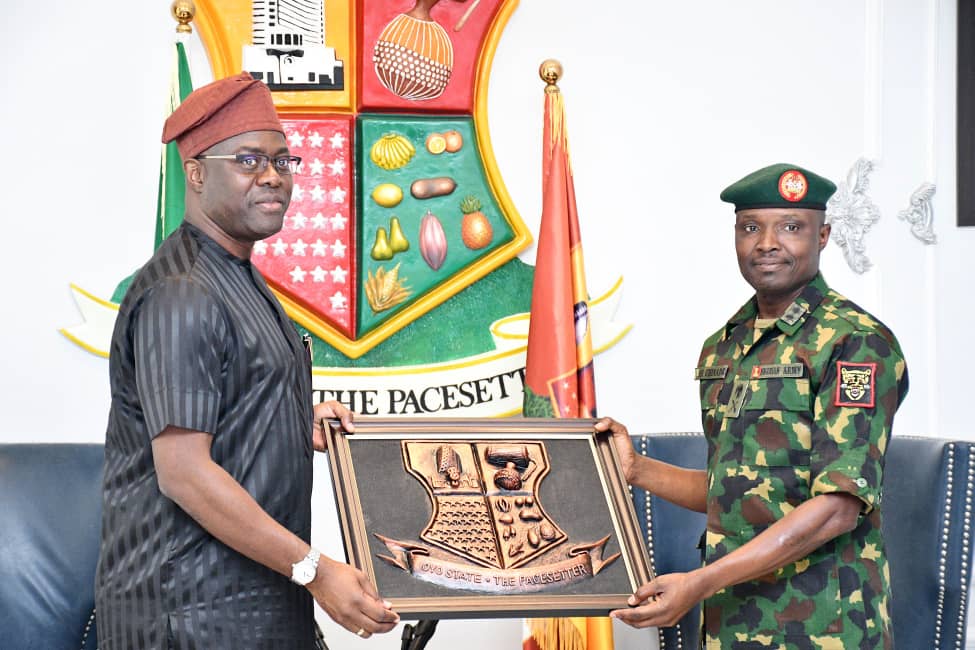 Oyo State Governor, ‘Seyi Makinde, on Thursday, sought the partnership of the Nigeria Army and other security agencies to flush out illegal miners and mining activities in the state.

Makinde, who pointed out that there are a lot of security challenges facing the country despite its dwindling fortunes, said that the state is designing a way to gather intelligence on illegal miners and pass the same to the Army and other security agencies with a view to preventing criminality through illegal mining activities.

The governor, while hosting the new General Officer Commanding, 2 Division, Major Aminu Chinade, at the Courtesy Room of the Governor’s Office, Secretariat, Agodi, Ibadan, pledged his continued support to the Nigeria Army and other security agencies in the state.

A statement by the Chief Press Secretary to the governor, Mr. Taiwo Adisa, quoted the governor as saying that though the GOC took command a few weeks ago, he has hit the ground running.

The governor said: “Let me officially welcome you to the Governor’s office. Yes, I know you took over the command in August, almost eight weeks now. We didn’t have the opportunity for an official visit but we have seen that you actually hit the ground running.

“I was a little bit apprehensive that maybe it will take some time for the new occupants of those positions to settle in but I can tell you and everybody that the assimilation of our situation was very quick and we saw a lot of action and continuity with what we were doing with the outgoing GOC and Garrison Commander.”

The governor, who appreciated the GOC and the rank and file of the 2 Division for what they have been doing in the state, added: “Let me, on behalf of the people and the government of Oyo State, say thank you for what the Division is doing for us.

“You provided officers and men for the state security outfit ‘Operation Burst.’ They have been conducting themselves professionally and that is why the relationship between the Division and civilian population has been cordial.

“We have managed ourselves very well and they have also assisted us in difficult times.

“So, we say thank you and want to continue the relationship, which is in existence between the division and the government and people of Oyo State in particular.

“We all know this is a difficult period for us as a nation. We are faced with insurgency in the North-East, banditry in the North-West. Even closer home here, we have been receiving reports of pressure on bandits in Niger State and some of them have filtered into Oyo State through Kwara and the Northern part of Oyo State.

“Few weeks back, we had an incident of kidnapping at Ipapo. So, these are challenges we are facing and unfortunately, the resources are not there. The mainstay of Nigeria’s economy, which is crude oil, we have moved from an average production of 2.5m barrels a day to less than a million barrels.

“Meanwhile, security challenges keep mounting and you are being asked to do so much more with far less resources.

“So, for us as a state, we recognise the fact that we have to come in and we will do our best within the little resources available to us to ensure that we support your operation. “We will also contribute our own portion to ensure that ‘Operation Still Waters’ is successful in this state.”

Earlier, the new Garrison Commander, Major Chinade, appreciated Governor Makinde for the support he has been giving to the Army in the state.

He said: “Your Excellency, since assumption of office, I have been going round to familiarise myself with units, formations within the Division of my area of responsibility.

“I want to thank you, Your Excellency, for being a good host and the support you have rendered to us. Let me also use this opportunity to hint you about our ‘Operation Still Waters’, which is an annual exercise that is designed to address prevailing security issues within the respective areas of operations where those exercises are conducted.

“We want to convey the warm greeting of the Chief of Army Staff to you and thank you for being good to us and other sister agencies. You have consistently been good to us. We thank you so much for the unprecedented support for 2 Division, because I have had the opportunity to serve in the Division before now.

“The Operation Still Waters exercise will run till the end of the year and even to the early part of New Year. So, I want the good people of Oyo State to feel at home when they see the military movement and the hype in military activities. They have no reason to complain or have any reason to be afraid when they see that.”