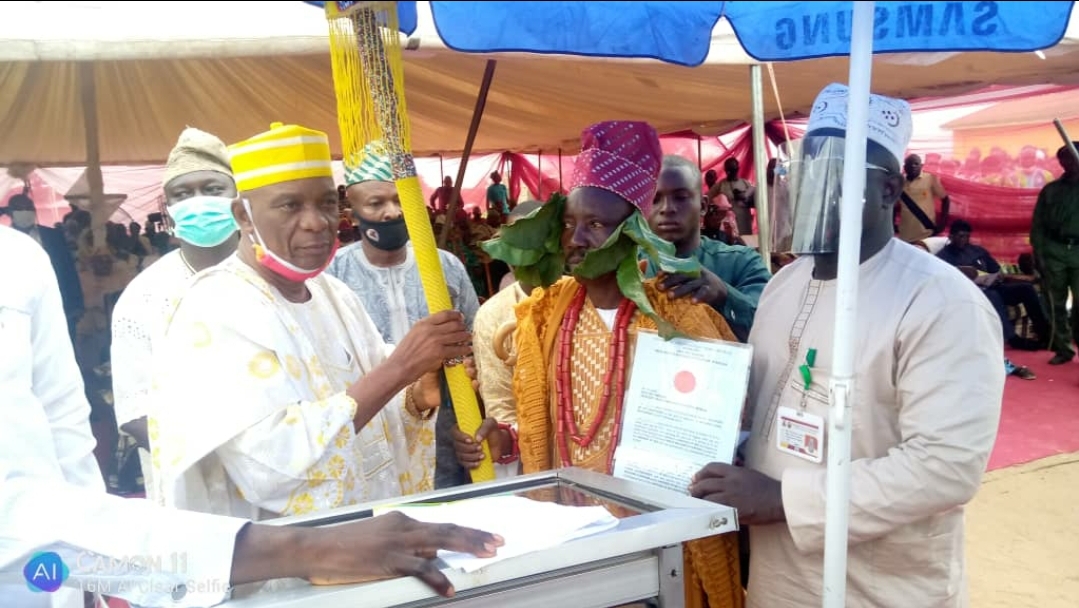 Governor Makinde of Oyo State has presented Instrument of Office to the Amunijo of Ijio land, His Royal Highness, Oba Mudasiru Olawale Oyewobi after four years that the community has been without a king.

While presenting staff of office to the new Amunijo of Ijo Land on Friday evening at Ijio town, Engr. Makinde noted that efforts of traditional leaders in societal development could not be over-emphasized.

Speaking through the Commissioner for Local Government and Chieftaincy Matters, Chief Bayo Lawal, Governor Makinde commended the people of Ijo Land and Iwajowa Local Government in general for their trust in him and their support for the Present administration in the State

“I wish to express my profound gratitude to the good people of Ijo land and Iwajowa Local Government in general for your trust in my capacity to effectively bring the desired changes by voting me in as the Executive Governor of Oyo State, I therefore enjoin you to sustain your trust in my administration.”

While admonishing the new Kabiesi to be alive to his responsibilities by serving and protecting the interest of his people, the Governor pledged his administration’s commitment to complete all ongoing projects earmarked for Ijio and the State at large.

“I assure the good people of Ijio land of my government’s commitment to complete all ongoing projects earmarked for the town and other goodies of Seyi Makinde’s electoral promises such as security, quality education, effective healthcare services delivery and a sustainable agricultural value chain that will attract both local and foreign investors to foster prosperous economy.”

He wished the new king a peaceful and enduring reign that would be remarkable for good development.

Earlier in his address, the Caretaker Chairman, Iwajowa Local Government, Hon. Oyinloye Jelili, commended Governor Makinde for prompt approval of the traditional rite, adding that the event would accord the sons and daughters of Ijio community opportunity to celebrate the enthronement of a new Oba since the demise of Late Oba Gabriel Okunade Adegoke in 2016.

He added that the rite would enable Ijio Community to be at equal pedestal with other towns as well as accelerating socioeconomic development of the community.

In his remarks, the Amunijo of Ijio Land, His Royal Highness, Oba Mudasiru Olawale Oyewobi thanked God for making the day a reality and however prayed that Ijio community would experienced landmark achievements and peace.

He called on every Ijio sons and daughters outside, not to forget their father’s land, adding that no place can be like home.