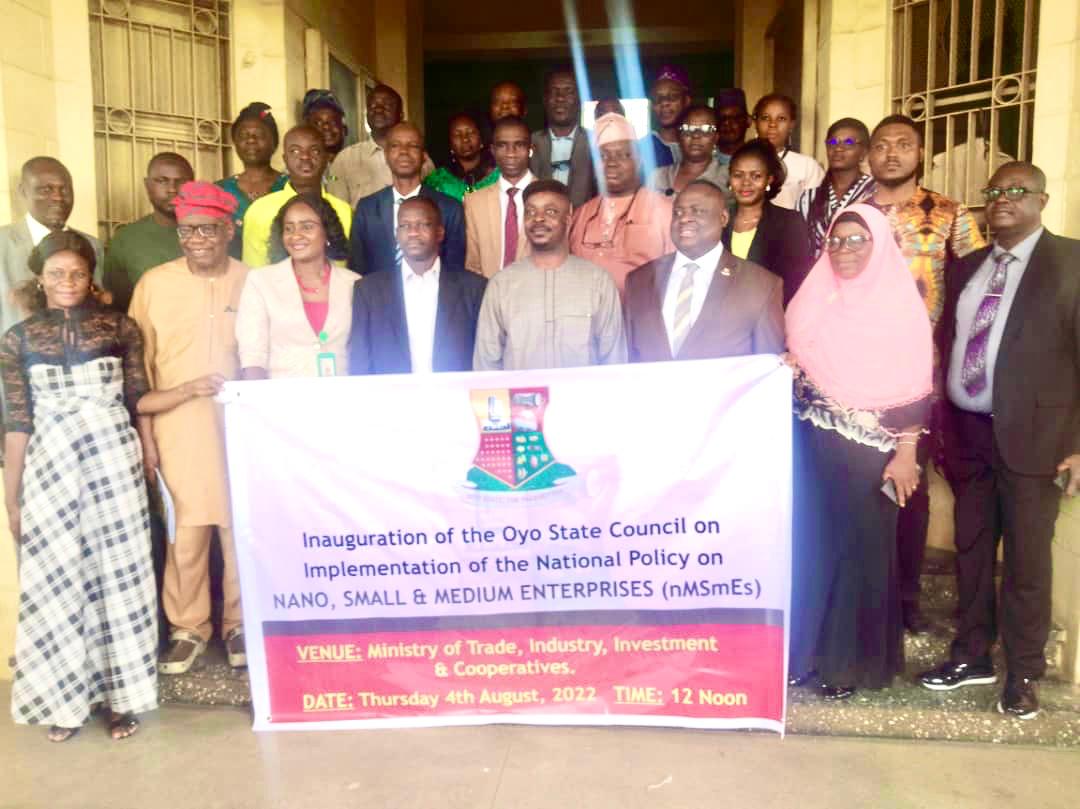 The Executive Governor of Oyo State, Seyi Makinde has inaugurated the Council on implementation of the Revised National Policy on Nano, Micro, Small and Medium Enterprises (NMSMEs) 2021-2025.

He said the implementation of the National Policy on MSMEs, which is an important directive of Small and Medium Enterprises Development Agency of Nigeria (SMEDAN) necessitated the need for inauguration of the State council.

The event, which took place at the Ministry of Trade, Industry, Investment and Cooperatives’ conference room at Ibadan on Thursday drew members of the State council from public and credible private sector institutions.

Governor Seyi Makinde, who was represented by the State Commissioner for Trade, Industry, Investment and Cooperatives, Barrister Olasunkanmi Olaleye said, the Council would serve as the vehicle for driving the implementation of the Policy recommendations.

“Today’s inaugural meeting is to encourage interaction among relevant stakeholders, interest groups and government, with a view to ensuring virile business environment conducive for productive investments in the State and Nigeria as a whole, with regards to derivable benefits in the area of industrial development of Oyo State.

“It is indeed an obvious fact that the Nation is blessed with abundant human and natural resources which are yet to be fully developed and exploited for social, economic and technological advancement of the country, hence efforts of Governments alone cannot solve all the problems being experienced at this critical and trying period, which calls for the need for stakeholders in the business and investment public to come together and chat a leeway for development,” he said.

Noting that industrialization is the wheel of progress, as no nation could prosper without putting the natural resources at it’s disposal into effective use, Governor Makinde said as part of the transformation agenda of his administration, laudable programmes and projects targeted at the revitalization of the state’s economy have been put in place through the Ministry.

He therefore charged the Council to stimulate and facilitate the culture of entrepreneurship, assist in exhibiting creativity and innovations, support ethical decisions for good development of business entities, as well as generates ideas, programmes, policies and processes that will assist the industrialists in the state.

He explained further that, MSMEs will create enough jobs to meet the nation’s needs especially in its drive towards diversification of its economy.

He added that the scheme is focused on finance, skills, development, marketing, technology, research and development among other areas in order to create platform or framework to collectively attend to some of the basic challenges of the sector.

“Part of the objectives are to facilitate and sustain a vibrant MSME sub-sector that will be the major driver of national economic growth and development as well as effectively deliver on employment generation and wealth creation, aimed at accelerating economic growth,” he explained.

In his contribution, the Permanent Secretary, Oyo State Ministry of Trade, Industry , Investment and Cooperatives, Dr Bunmi Babalola emphasized the need to engage the youths in state effectively emploring members of the Council to see it as a collective task.

The Acting Head, Corporate Affairs Commission Ibadan Office, Yusuf Dauda encouraged small scale businesses owner to register and formalize their businesses so as to benefit from largesse of the federal government and assistance from SMEDAN.

Dauda said the cost and registration of businesses have been simplified and can be done online without passing through any third party, as the Commission has done a lot of reforms to support small scale businesses.