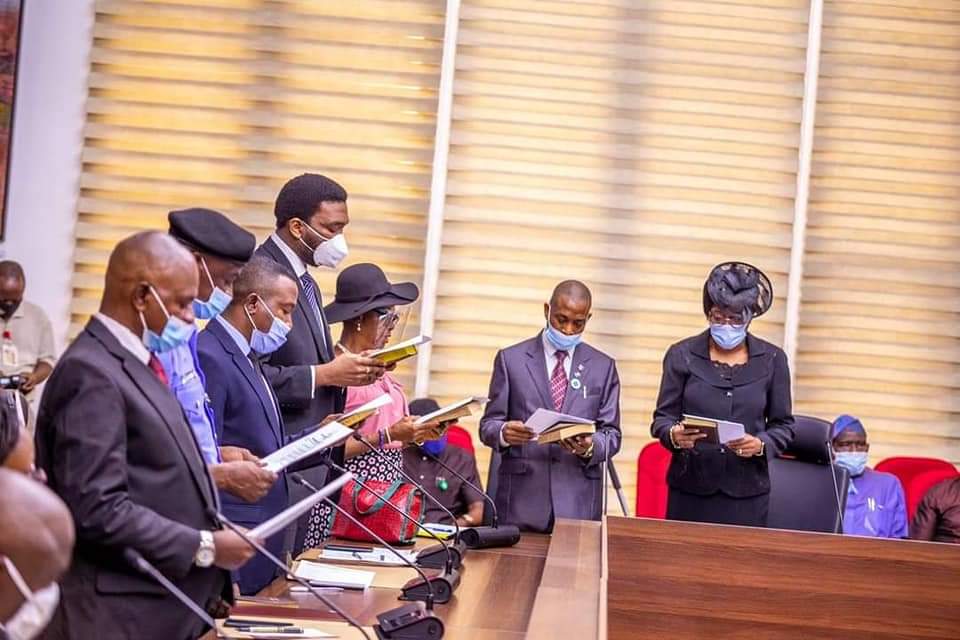 Governor Seyi Makinde of Oyo State has inaugurated the Board of Oyo State Anti-Corruption Agency, otherwise known as OYACA.

The Oyo State Anti-Corruption Law 2019 which created the agency, aims at ensuring that public and civil servants at the state and local government levels operate without institutionalised corruption.

During the inauguration held at the Executive Council Chamber of the Governor’s Office, Engr. Seyi Makinde declared that his administration’s zero tolerance for corruption remains unshakable.

The Governor said that with the inauguration,  Oyo State as Pacesetter State, will become a worthy reference for other states across the country.

While speaking at the swearing-in ceremony of members of the Oyo State Anti-Corruption Agency (OYACA), the governor declared that the commission will have no political bias.

A statement by the Chief Press Secretary to the governor, Mr. Taiwo Adisa, quoted  the governor as warning against all forms of corrupt practices, noting that the establishment of the agency was to sanitise the public/civil service and ensure that everyone carries out their responsibilities without corruption.

It will be recalled that the bill for the establishment of the agency was forwarded to the House of Assembly shortly after Makinde assumed office in 2019.

The governor said: “The journey to this inauguration formally started about a year ago with the signing of the Oyo State Anti-Corruption Law 2019. The law is primarily directed at sanitising the public/civil service and ensuring that both public and civil servants at both the state and local government levels carry out their responsibilities without institutionalised corruption.

“When I was campaigning, we knew corruption was an issue and I basically divided corruption into two broad categories. We have the routine one, which the Okada riders, micra drivers, other people too engage in.

“We meet policemen on the road and give them N50 or N100 because we don’t want any trouble. We just want to pay and go or people come into the Secretariat and they want to get tax clearance for their lands, documents, even things that are as simple as validation of their state or local government of origin certificate, they pay some money and go. That is what I call routine corruption.

“What can kill us and what is killing us is the systemic corruption or the institutionalised corruption.

“What I earn as the salary of a governor is about N600,000 and I am living at a level where I spend on a monthly basis N6,000,000, that is systemic corruption and it is institutionalized. We will be lying to ourselves if we do not acknowledge the endemic corruption in the system.

“With the inauguration of the Oyo State Anti-Corruption Agency, OYACA, we are sending out a clear message here in Oyo State. We have zero tolerance for corruption. So, any person, elected, employed or engaged in any capacity in the public or civil service in Oyo State, who accepts or promises to accept money, fees, donations, loans, gifts, or any other reward for rendering a service to members of the public will be investigated and be made to face the full wrath of the law.

“It will no longer be business as usual. Public/civil servants are called to serve, not to steal. And I trust that the members of OYACA will do all within their powers to ensure that all matters brought to their attention are judiciously handled. There are to be no sacred cows. Anyone who runs afoul of this law will be prosecuted swiftly.”

Governor Makinde equally implored residents of the state to take advantage of the anti-corruption agency to duly report any civil or public officer demanding bribe or any form of gratification to render services.

“I will always maintain that for us to build the Nigeria we dream of, we must create strong systems and institutions. We must also be willing to work and make sacrifices for those systems to function correctly. This agency is part of the system we are putting in place. Instead of offering a bribe to get ahead of a particular contract or promotion, why not be patient and await your turn?

“Corruption works with a giver and a receiver. One side of it is the side of demand. If there is no demand, there won’t be a supply. So, there is the demand side and there is supply side. I don’t know whether it is elastic but I do know the two exist. So, I urge the good people of Oyo State to refrain from offering bribes and to refuse to give bribe to any public officer even if they insist on it.”

The governor indicated that there are many channels to report misconduct to the agency, urging that residents of the state use the feedback channels already put in place by his government to report any official including himself.

“We have many channels to report such misconduct and there will be more channels on the way. For now, please make use of our feedback channels to make a report against any public officer who is involved in corruption including me.

“Some people may use my name to say His Excellency said we should do this or that. Please, I don’t have any agent or anyone to act on my behalf. So, report me to the agency. I promise I will come and defend myself for any report that comes to you regarding me, so also the rest of the cabinet.

“Let me also say this, it has nothing to do with politics. It is not PDP or APC and you are not to be used to witch-hunt anybody. Corruption does not know PDP or APC. So, let our people on the other side know that we will ask them to account for their stewardship if there is a need for that. If they go to town to say they are being witch-hunted, they will prove their innocence in the law court but not in front of you,” the governor added.

In her remarks, the chairman of the agency, Retired Justice Eni Esan, former president of the state customary court of appeal, assured that the agency would do its best to fulfil its mandate and assist the state government in sanitising the public service.

Other members of the anti-corruption agency are Barrister Temitope Ayorinde, Prince Oyebade Oyedapo, AS Asaolu, Esther Olapade, Ihindero Lawrence and Ibrahim Tijani, who will act as the secretary of the agency.