Makinde flags off the construction of new Akesan market complex 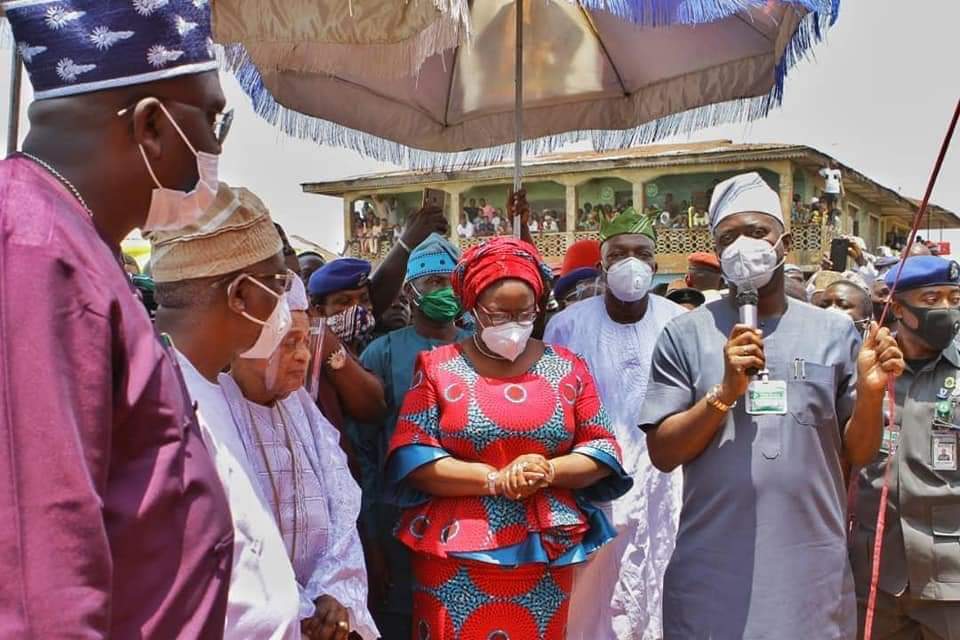 …says first phase will be ready in six months

Oyo State Governor, Engineer Seyi Makinde, on Tuesday, flagged off the reconstruction of the Akesan Market Complex, Oyo, which was gutted by fire in January 2020.

The governor had, on January 8, this year, visited the burnt 400-year-old market, promising to rebuild it into a modern trading facility.

Speaking while flagging off the reconstruction of the market, the governor declared that his administration would not only upgrade the market complex, it will modernize the fire station to prevent future occurrence of such incidents.

A statement by the Chief Press Secretary to the governor, Mr. Taiwo Adisa, quoted him as saying that the first phase of the project, which is to be completed in six months, will have 352 lock-up shops, one police post, a modern toilet with 12 units for males and females, one administrative block, and a road network.

The governor also added that the second phase will consist of 176 lock-up shops, 168 open shops, three warehouses for storage and preservation, as well as modern toilets and road network.

The statement indicated that the new Akesan Market, Oyo, has been awarded to Messrs MORTAYUS NIGERIA LIMITED, an indigenous company, at the cost of  N781, 716, 820.15.

Governor Makinde stated that the government had already made interventions on the market, including giving financial aid to traders who lost goods to the fire disaster and replacing the fire truck burnt by irate youths at the fire station in the market.

He said that the flag-off of the reconstruction project was in fulfillment of the government’s promise to rebuild the Akesan Market, noting that the fund for the project is already available.

He said: “On January 8, we visited the Akesan market after the fire incident. We came here that day to assess the damage caused by the shocking fire outbreak and I commiserate with traders who lost goods in the fire.

“I remember that I told them that I was taking full responsibility for the failure of the Oyo State Fire Service to contain the fire. And I also said that we would rebuild this market and compensate them for their losses.

“We were able to provide our widow’s mite as a government to support the people who lost their livelihoods here and had to start again. Kabiyesi said he had a shop here that was also burnt and I want to assure him that by the time the new shops are being allocated, he would be given priority.

“We have also done a few things, apart from our widow’s mite. You know some hoodlums burnt a fire truck and the office of Oyo State Fire Station. Well, we have replaced the fire truck so that those who are within the neighborhood of Akesan can go to bed and sleep with their two eyes closed. The fire truck is here in case of any eventuality and we will still upgrade the fire station here by the time we are done with this market.

“So, we are here today to fulfill the second part of that promise, to officially flag off the rebuilding of Akesan Market. The fund for this project is already available. We did not borrow it.

“You must already know that this market had been in existence for 400 years and no one in recent history could have anticipated that something like this would happen. But what that means is, we did not plan for a fire. So, one of the things we are going to do is to put some things in place to make sure that, should there be a fire in the future,  it will not be as devastating as this last one was.”

The governor assured that those who had shops in the market before it was gutted would be retained, adding that the new Akesan Market would, however, be bigger than the burnt structure.

He stated that the existing register for  tenants in the market will be strictly followed, adding that those who want spaces in the market as new entrants will also apply for stores and have such allocated to them.

Governor Makinde also stated that the reconstruction project has been divided into two and that upon the completion of the first phase within six months, the government will allocate the shops and trading activities will begin in the market.

He added: “After that, we will begin the second phase that will consist of 176 lock-up shops, 168 open shops, 3 warehouses for storage and preservation and we will install a cold room for preservation of your fish and all that. There will also be modern toilets as well as a good road network. Other facilities like fire hydrants, water reticulation system, electrification, traffic and erosion control. All of that will be done in both the first and second phases.

“We are spending over 781 Million on the rebuilding. We are revealing this amount because we want everybody to take care of the project. Those who think this government is embezzling the state’s funds should wait till the project is completed and come back to examine if the money spent on it, is worth it or not.

“The contractor we awarded this project to, MORTAYUS NIGERIA LIMITED, hails from Oyo Town, and has assured us that in less than one year, the market will be completed and ready. But we pray that we will never experience anything like that of the January 5 fire ever again.”

In his remarks, the Alaafin of Oyo, Oba Lamidi Olayiwola Adeyemi III, called on the government to monitor the project so as to compel the contractor to use quality materials.

The Alaafin said: “I want to say we are grateful to the governor for deeming it fit to build a new Akesan Market for us. I plead that the governor should ensure that the materials that will be used to build this market must be of standard quality, because they say it is beauty that ends the palace of a king that got burnt.

“I want a situation whereby when people like us are gone, people will remember us for being part of those who achieved a big project like this in Oyo. We want those that will build it to follow the precise pattern of the building and I pray that God will help them.”

Similarly, the Iyaloja of Akesan Market appreciated the governor for his support and sympathy ever since the fire incident occurred, as well as the financial assistance offered to the market men and women.

“We cannot but also appreciate the governor for today’s flag-off of the construction of the new Akesan Market. We are all deeply grateful for this gesture. I know that he is someone who doesn’t like people to suffer; one who has the interest of the downtrodden at heart. He does not want us to beg before we eat.

“And as he has promised that the market will be open for commercial activities within six months, so shall it be; because we know the voice of God is the voice of a man. We know he will do it because he fulfills any promise he makes and God will always support him.”

Earlier in his address, the caretaker committee Chairman, Oyo East Local Government, Hon. Saheed  Arowosaye Adeyemi, said that Akesan Market remained important to the socio-economic development and survival of the historic Oyo Town and the entire state, appreciating the governor for promising to re-allocate shops to all shop owners that lost their shops in the inferno, at no cost on them.

He thanked the governor for taking measures to improve the economy of Oyo Town by deliberately citing viable projects including construction of roads and bridges, operation zero potholes, the refurbished primary healthcare centre at Alaafin’s palace, the 10,000 metric tonnes capacity silo in Aawe, the Agribusiness project also in Aawe and the new Akesan Market among others.