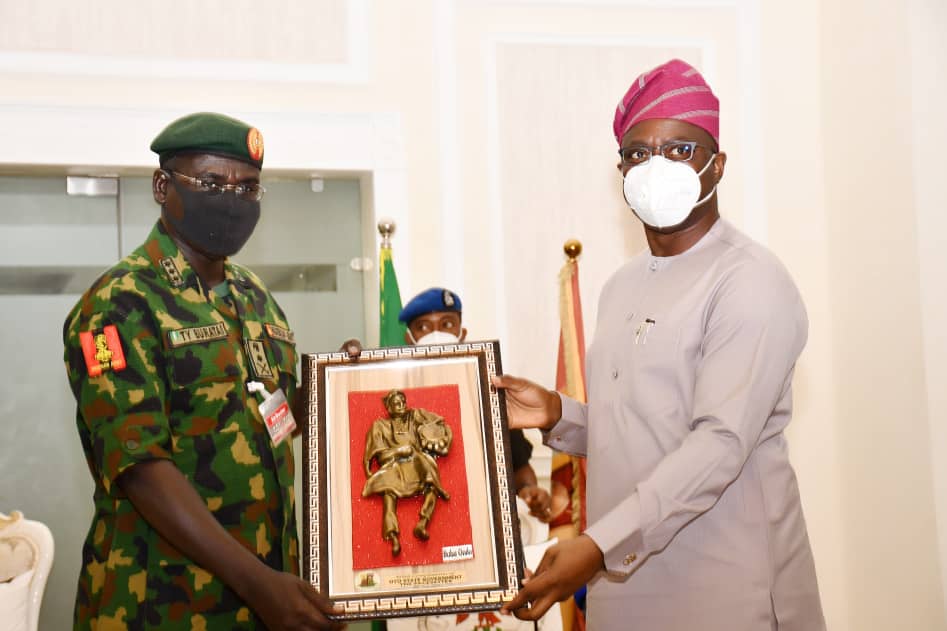 Oyo State Governor, Engineer Seyi Makinde, on Monday, commended the Chief of Army Staff, Lt. General Tukur Buratai for leading a professionalized Army, declaring that his administration would continue to maintain cordial relationship with the Nigerian military.
Governor Makinde, who stated this at the Government House, Agodi, Ibadan, while receiving the Chief of Army Staff in a courtesy visit, said that the impartiality of the Nigerian Army in the nation’s political process is equally commendable.
According to him, the government of Oyo State would continue to cooperate with the Army in order to ensure the security of lives and property of the people.
A statement by the Chief Press Secretary to Governor Makinde, Mr. Taiwo Adisa, further quoted the governor as saying that his administration will continue to support the military wherever possible, adding that the government considers the security of lives and property as the foundation for development.
The statement further quoted Makinde as saying that his administration will continually make life better for the family of the officers and men of the Nigerian Army serving within its territory.
He said: “I want to use this opportunity to welcome you and your entourage to Oyo State.
“The current relationship that exists between the Nigerian Army, the government and the people of Oyo State has been cordial and we want to appreciate this.
“We, as a government in Oyo State, the only thing we can do is to support where possible. We know we have officers and men from this division that are posted all over and they have their families at home here. It is on that basis we have been relating with the GOC and his team such that whatever we can do to make life a little better will be done.”
Governor Makinde, who expressed his administration’s commitment to the provision of security of lives, commended the Chief of Army Staff for injecting professionalism into the Nigerian Army and managing the security challenges in the country.
“We acknowledge the challenges going on right now in the country. We are in the middle of a pandemic and economic meltdown. We are running a mono-economy and the price of the mono-product in the international market has really gone down considerably.
“So, we are all feeling the pinch and rolling it with all the issues going on in the North-East; insurgency, banditry. I wonder how challenging the environment can be. But in the middle of those challenges, I am glad to note that the Nigerian Army has applied itself professionally and it is managing the challenges. So, I want to say kudos to you and the officers.”
Earlier in his remarks, Lt. Gen. Buratai commended Governor Makinde for providing necessary support to the Army’s operations in the state.
He assured the governor of the readiness of the Army to continue to participate fully in the maintenance of peace and order and to remain impartial in the discharge of its duties.
The Chief of Army Staff also told the governor that he was on a working visit to 2 Division, Ibadan to commission major projects done by the Nigerian Army for the benefits of humanity in line with the civil-military cooperation of the Nigerian Army.
He said: “I am pleased to be here this morning for this very important courtesy call. This administration has been very successful and I want to assure you that the military will remain impartial in discharging its responsibilities, which is our sacred role.
“For some days, I have been on a working visit to various theatres of operation, the last being the North-West theatre of operation in Zamfara, Katsina states, where I assessed the ongoing anti-banditry operation code-named Exercise Sahel Sanity.”
The event had in attendance top government functionaries, the General Officer Commanding (GOC) 2 Division, Nigerian Army, Major General Anthony Bamidele Omozoje and other top military officers and men of the Nigerian Army.