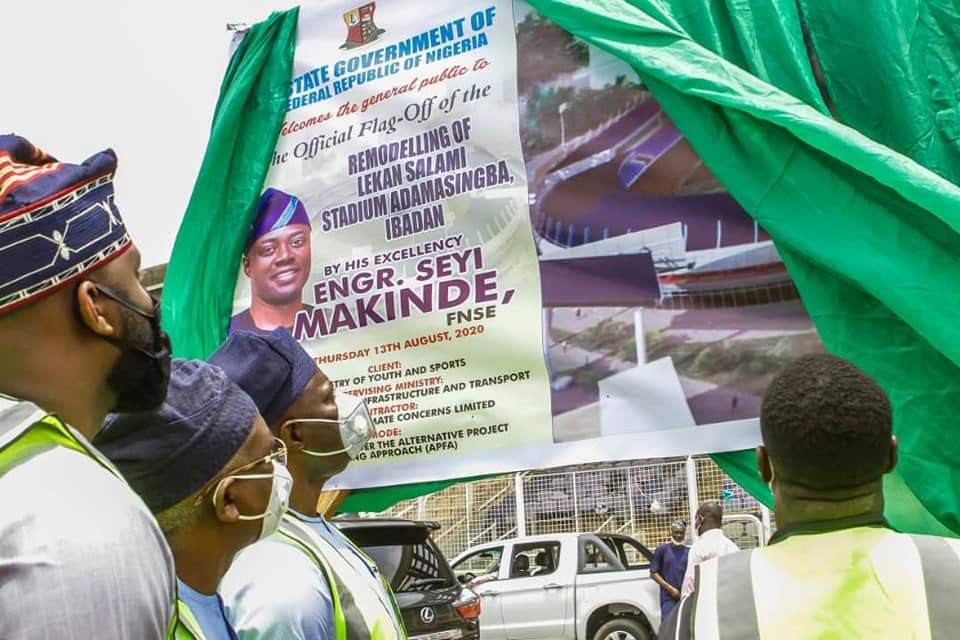 *Says govt will continue to match policy with action

He said this on Thursday, when he kicked off the remodelling of the Lekan Salami Sports Complex, Ibadan, stating that the Complex will be upgraded to a world class standard.

The governor, who stated this at the main bowl of the stadium, while flagging off the project, said his administration will continue to walk its talk, matching policies with actions.

The governor stated that the project will be funded through the Alternate Project Funding Approach (APFA), which entails that the contractor will fund the project, while the state will repay the contractor over a period of 29 months.

He said: “The contractors, Messrs Peculiar Ultimate Concerns Ltd, have given us the assurance that the project will be completed in 18 months. By God’s grace, in the next 12 months, coronavirus would have left us, and we will have the opportunity to sit here, in this stadium, fully remodelled and watch my team, the 3SC beat their opponents, live! So Messrs Peculiar Ultimate Concerns, 12 months is 12 months. No delays and you have to do a quality job that the people of Oyo State will be proud of”.

“This is another step in the right direction, positioning Oyo State to attract investments. I hear some people are already saying we should slow down but I am here to tell them that this is not the time to even think of slowing down. Our administration is here to grow Oyo State and to make sure everyone in our beloved state feels the real dividends of democracy.

“When the history of this place was being traced just now, they flagged off this facility 44 years ago. It was commissioned 32 years ago; and I came here once to watch a 3SC game and, at half time, I went to the changing room to talk to and encourage the players but I could not believe what I saw: players sat on the bare floor. And I asked myself, is this where we want to mould world-beating athletes? So, I said ‘no’. I felt for both the players and the crew.

“After that, I decided to, on my own, visit this place and looked at all of the facilities that we have in here. They were all in a state of dilapidation.”

Governor Makinde, who declared that the remodelling project was another step in the direction of positioning the state to attract greater investments, said his administration would not be deterred by criticisms and that it would ensure that every resident of the state feels the real dividends of democracy.

He added that for the state to attract the right investments, it must raise its game in terms of infrastructure and matching what obtains in other places, saying that this is the path his administration has been toeing, which is responsible for its attention to fix roads, install street lights and invest heavily on infrastructure and security.

“Oyo State has had a rich sporting history. Back in 1963, the first World Boxing title fight in Africa was held here in Oyo State. We were able to host that fight and benefit from all the tourism revenue because we had the facilities to do so. And so, we are remodelling this sports complex now, so we can reap the benefits in Internally Generated Revenue, IGR. If there was a call for cities to host a national sporting event today, can Oyo State boast of having the facilities? The answer is no.

“So, in Oyo State, we cannot attract investors without the right infrastructure. If we are telling people to leave wherever they are and come here, we should be able to give them what they are benefiting where they are or even more.

“If we keep saying Oyo State is ready for business, without the right infrastructure in place, they will tell us they like our policies, but they want to see better facilities. So, we will continue to do everything in our power to ensure that whenever investors come calling, we are ready to receive them and make them stay. And that means we must match our policies with action.

“We have already told them there will be no multiple taxation and that we will not wake up and impose random taxes on them. They can see that this is true. We have also promised that they will not spend hours in traffic, we are keeping our promise by investing in road construction and rehabilitation. We are putting street lights all over the place. We also have to match the tourism and recreational facilities that they have in other places.

“If the government can provide facilities that are comparable to those those in any part of the world, then we can be sure that all our talents and youths will have somewhere to come to. And we will discover more talents and we will have more record setters coming out of Oyo State. And this is why we are here.”

Earlier, the Commissioner for Youths and Sports, Mr. Seun Fakorede, said the remodelling is essential for the growth and survival of Sports and the engagement of youth productively.

He noted that the remodelling will attract international focus and change the economic fortune of the state, through hosting of national and international sports tournaments.

In his remarks, the managing Director of Peculiar Ultimate Concerns Limited, Mr. Adeleke Olanrewaju, said that the benefit which Lekan Salami will bring to the state will be unquantifiable through talent development and others, adding that the remodeling of the stadium will also boost the IGR, of the state.