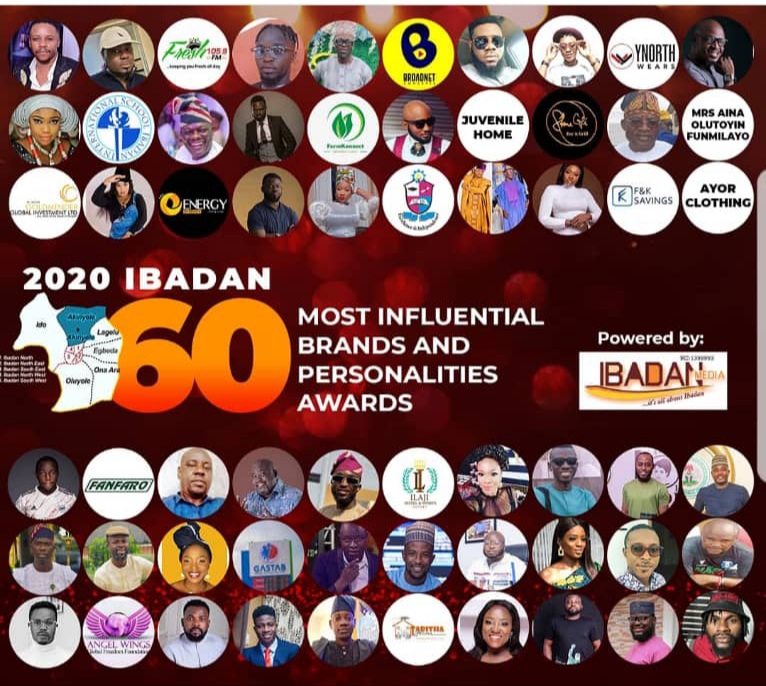 In line with its consistency, IbadanMedia.com has unveiled the recipients of its 4th edition of the annual 60 Most Influential Personalities and Brands in the city of Ibadan.

This was revealed yesterday, Friday, 18th December 2020 at the Mauve 21 Event Centre in an event which was tagged: Nigeria @ 60: Celebrating a living icon, with special recognition to the designer of the national flag, Pa. Michael Taiwo Akinkunmi for his tremendous contribution to this great nation.
The Mr. Flag Man as he’s being called who designed the green-white-green flag 62 years ago was represented by his son, Akinwumi Akinkunmi who collected the “Life Time Achievement Award” on behalf of his dad.

Also, the much-anticipated list of Ibadan 60 Most influential Personalities & Brands was also released on the same day, which was a compilation of 46 people from different walks of life who are making an impact across these 8 categories: Politics & Governance, Business & Entrepreneur, Bloggers & Influencers, Music & Entertainment, NGO/Homes, Contributors to the growth of the city, Media Practitioners: (Journalist/OAP/Sports Writers & Presenters), and Sports & Athletes.
The list also has 14 most influential brands that cuts across; Fashion, Education, Media, Food & Restaurant, and others categories.

The convener and CEO of the popular Ibadan based online media outfit, Ola Olalekan Olanrewaju in his speech at the event explained that the award is designed to honor personalities and brands, who have made incredible impacts in the lives of the people and contributed positively to the growth of Ibadan and Oyo State in general.
According to Olanrewaju, “We set up a 10-man committee (board of jury) which comprises of core professionals in diverse fields of endeavors every year to select people and brands with influence because of the huge task.

“It was this committee that chooses all the worthy recipients base on the following criteria: their influence in the city, based or own a business that engaged citizens in the city, those who are adding values to other people’s lives, and those who are contributing to the growth of the community in one way or the other.”

The award event also celebrated some other prominent people in its honorary category as Com. Demola Babalola, the Oyo NUJ Chairman was honored with the “Outstanding Achievements Award” for his tremendous accomplishments within one year in office, while a special recognition award was awarded to; Hon Yusuf Adebisi, the Deputy Chief-whip, OYHA. Hon. Kazeem Olayanju, Chairman, House Committee on information, OYHA, Hon. Ademola Ige, S. A Culture & Tourism, Hon. Akinwole Akinwale (Wolekanle).

Most Influential Oyo Indigents In Diaspora was awarded to Amb. Olamide Davies Talabi {President, Women in Shelter Environment (WISE)} and ADERONKE DAIRO (Founder, AOD Foundation)
Most Influential Song of the Year was given to Tola Osumare and his band for the popular single “CELEBRATION”

“Not surprisingly, it is no longer a subject of debate that this city offers even better standards of living compared to the hustle and bustle of Lagos”, said Ibadanmedia.com boss.

He added that “we concede that it took more than just 60 people to reach this significant point in the history of Ibadan and Oyo State, these are the people who have struggled to make a name for themselves despite having little or no support system, consistently fought to make something of their various endeavors. There are others who have strategically organized several events that placed Ibadan on the roadmap to success and limelight”.

“The many individuals who have contributed in any way at all, we say THANK YOU as everybody cannot be on the list. But, we take time out to recognize these 60 people and brands across 8 categories, and on this note, our top 60 Most Influential Personalities & Brands for the year 2020 are listed below according to their category”, He opined.
Please note: The arrangement is not in any particular order or arranged to give reference to one person over the others.