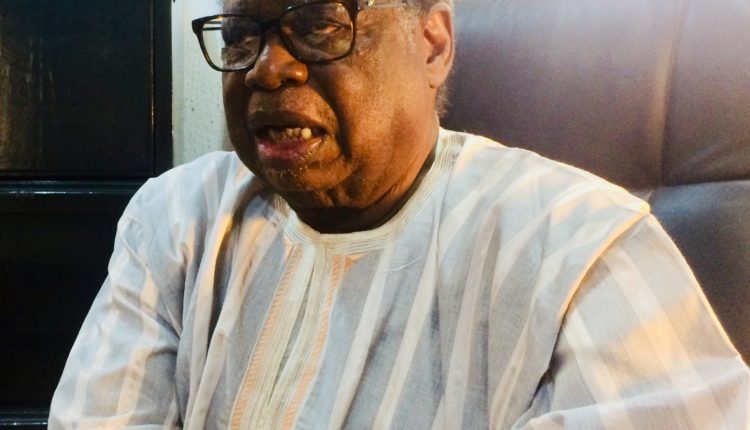 The News Agency of Nigeria (NAN) reports that family, friends and old students gathered at the school premises to honour Amao, who would be 90 years on Tuesday, for his contributions to the school and humanity in general.

In his remarks, Prof. Adekunle Kunle-Olowu, National President of the association, said that Amao championed rehabilitation of the school.

Kunle-Olowu said that he led by example by being the first to donate for the school’s projects whenever the need arises.

He said that Amao showed uncommon commitment for the revival of IBHS.

“The culture of given is lacking in Nigeria where people give one and intend to get much in return.

“When you find people who give without looking back and their given not base on what they get back, these set of Nigerians needed to be celebrated and let people know them.

“We have to celebrate him, because he did not only put his time to serve as National President of the old students of IBHS for 18 years, he put in his resources and we need to celebrate him,” he said.

Kunele-Olowu said Nigeria as a country was blessed with good people who are willing to assist the needy, adding that those phillatropists needed to be honoured and celebrated.

Also, Mr Yusuf Ali, a Senior Advocate of Nigeria (SAN), described Amao as “a total individual whose level of commitment to good course was not in doubt.”

Ali said that Amao related with them as equal and considered other people’s opinion in decision making.

In his appreciation, Amao thanked the association for the honour done to him.

He advised the students not to copy anyone with bad behaviour in order to excell in future.

“I was tough and stubborn during my school days and I don’t want students to do that again; though, I was lucky to have turn over a new leaf.

“I love IBHS very well, it is a school where you will achieve anything by yourself by the grace of your work and be independent in life and that has helped me today.

“I thanked God for my parents, I don’t have a father, he died when I was five years and my mother have taught me a good lesson.

“But, what I did in IBHS was that I copy people and that has taught me a lesson,” Amao said.

He called on Nigeria to always put God first in whatever they do for them to excel in life.

Commenting, a former student of the School, Mr Taiwo Obe, described IBHS as a giant school.

Obe called on all students to appreciate the old students of the school for turning the school structure in good shape.

He appreciated those who contributed in one way or the other to the success of the celebration, saying that more individuals would soon be honoured for their contributions to the school.