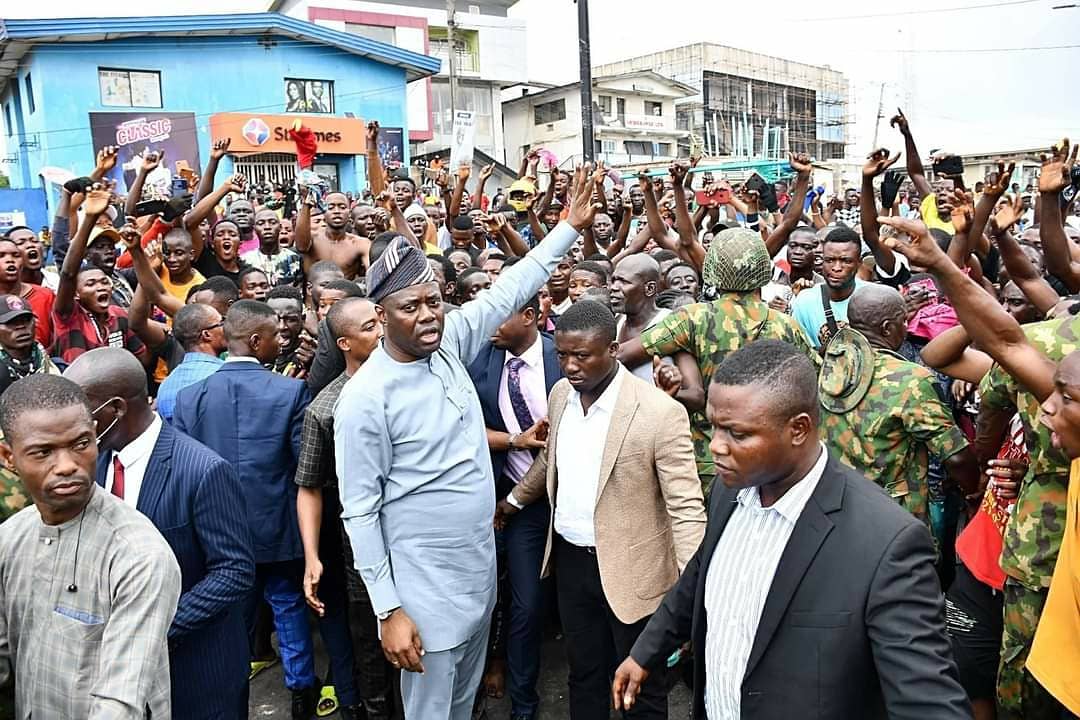 …promises to compensate those who lost properties

Oyo State Governor, Engineer Seyi Makinde, on Thursday, embarked on a tour of hot spots of #EndSARS protests in Ibadan, the Oyo State capital, where he declared that his government will continue to do what is necessary to secure the lives and properties of the residents of the state.

The governor, who was accompanied by a number of aides, stopped at different spots on the Idi-Ape/Iwo Road axis, where he spoke to protesters in English and Yoruba languages.

He warned youths to stop fomenting trouble or destroying properties in the name of the #EndSARS protests, adding that he does not want any further loss of life in the state.

A statement by Mr. Taiwo Adisa, the Chief Press Secretary to Governor Makinde, indicated that the governor also promised to engage with the Commissioner for Police in the state,  to work on how the police can take a back seat pending the time the situation in the country will be arrested.

Governor Makinde first made a stop-over at Testing Ground, Iwo Road, where policemen had been firing warning shots to ward off massing protesters from early Thursday.

He engaged with the protesting youths and residents, some of whom claimed to have lost properties to the violence that erupted in the area earlier in the day.

He promised that those arrested would be released before the end of the day, adding that the government would address the concerns of everyone who might have lost properties to the crisis.

The governor started by asking the massive crowd some questions and then assured them of redress.

He added: “I want to urge you, once again, my life is not worth more than your life. I don’t want anybody’s life to be wasted. I have heard what you all said. I am going to meet with the Commissioner of Police now, but, in the meantime, my people will wait here in this school to collect the list of those who were affected; those whose houses were burnt, those whose property were destroyed. Even if you are part of those whose cars were set ablaze, write down your name too.

“Let me also assure you that those who have been arrested will be released before the end of the day.

“I don’t want to lose anybody and I pray we will not lose anyone. When I leave here now, I will go and engage with the Commissioner of Police to take police off the street. The personnel of ‘Operation Burst’ that you see around is to protect you.”

Governor Makinde, who decried the violent dimension being introduced to the current situation, warned everyone to be calm, saying: “Please, there must not be violence. We are all Nigerians. So, let us go back and be calm.

“Among you, there are governors. There are presidents. So, let us go back home.”