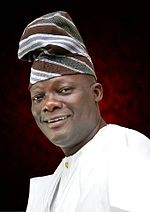 The Chairman Senate Committee on Local Content and Senator representing Oyo Central Senatorial District in the red chamber, Oloye Teslim Folarin has sent a message of condolence to the late sage Chief Obafemi Awolowo’s family, the government and people of Ogun state and Nigerians at large on the passage of Reverend Tola Oyediran (Nee Awolowo).

Senator Folarin in the condolence message issued by his Special Adviser on Media and Publicity – Com. YSO Olaniyi, described the eldest daughter of the late sage as a virtuous woman, humane and exemplary leader. “The demise of Rev. Tola Oyediran is a monumental loss to Yoruba and Nigeria at large” he said.

Extolling the virtues of the late Chairman, Board of Directors of African Newspapers of Nigeria (ANN), Publishers of Nigeria Tribune titles during her lifetime, Folarin said that she did not only contribute to the peace and stability of Yoruba nation, but also contributed immensely to the Nigeria media industry.

The three-term Senator noted that late Reverend Oyediran was an ideal mother and senior citizen, adding that she consistently stood up to offer useful guidance to Yoruba nation and Nigeria especially during trying times.

According to Oloye Folarin: “our mama was always there for us. At several challenging times, she never denied or shied away from offering tangible advice. Her counsel always saved our nation from the precipice”.

“Unarguably, we shall miss her wise counsel, honesty, unwavering commitment to the ideals of nationhood, sense of wisdom and humour.  She has left a big shoe that would be difficult to fill.”

Senator Folarin prayed that God in His infinite mercies grant her eternal rest just as he prayed the Almighty to give the  immediate family of Awolowo, Ogun State people and the entire Yorubas, fortitude to bear the huge loss.