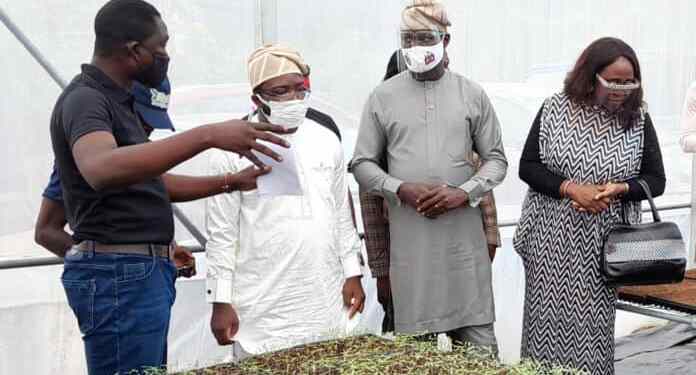 …says it will promote food sufficiency

Col. Oluwole Azeez, a retired Military Officer disclosed at the inauguration ceremony on Tuesday, that the project was the first of its kind in Nigeria.

Azeez said the project is targeted at taking agriculture from just planting and money making to a business that promotes food sufficiency and national development.

According to him, “in FarmKonnect, we run a model we call agricultural real estate and we are the first to do that. This allows multiple people to own a portion of the farm and they don’t necessarily have to step on the farm”.

“All they just need to do is engage their money and we take all the performances around. The greenhouses you are seeing here are specifically designed for the tropic”.

“The vision is to build 1,000,000 square metres of greenhouses. A controlled farming environment technology using greenhouses and net houses to produce fruits and leafy vegetables from tomatoes to pepper.”

“This is the first of its kind in Nigeria. This is specifically designed for minimal electricity as well as to expand our yield”.

He appreciated the Osun State Government for its tremendous support to the project and promised the state would ensure food sufficiency and job creation.

Earlier, the Osun State Commissioner for Agriculture, Mr. Adewole Adedayo, thanked Azeez for siting the project in the state. He also assured investors like FarmKonnect of Osun State Government’s readiness.

Adedayo said that the state government under Gov. Gboyega Oyetola has created an enabling environment for investors to thrive.
He added that the State Government has supported agricultural development through various initiatives.

“Today, having these facilities on ground to develop agriculture in the south-west is a dream realised. So FarmKonnect has realised a dream”.

“Like I keep saying, agriculture has the highest potentials to create jobs, both for skilled and unskilled labour. So, I will like to thank FarmKonnect for bringing this project to Osun State,” he said

He said that the state government would always support any investment or initiatives targeted at youth empowerment and job creation.

Also, Dr. Bosade Ogunlana, the founder, Entrepreneurship Initiative, commended FarmKonnect on the project, saying it would help empower many youths.

She said that Africa has more youths that would engage in land cultivation towards food sufficiency and security.

“Africa is the biggest gun of the world because over 60 percent of arable land in the entire world resides in Africa. I know with something like this happening here today, there is hope for Nigeria.

“Agriculture is the new gold, there is no longer oil. There is nothing we want to do with oil. Agriculture can help us with the GDP of the economy.

Ogunlana appreciated Osun State Government for its support to FarmKonnect, urging the government to ensure adequate security for the project.

The event which was held in compliance with COVID-19 protocols featured the unveiling of the tomato Statue and facility tour.

The event was also attended by Mr Yemi Lawal, the State Commissioner for Youth and Sports as well as representatives of various partners of FarmKonnect.