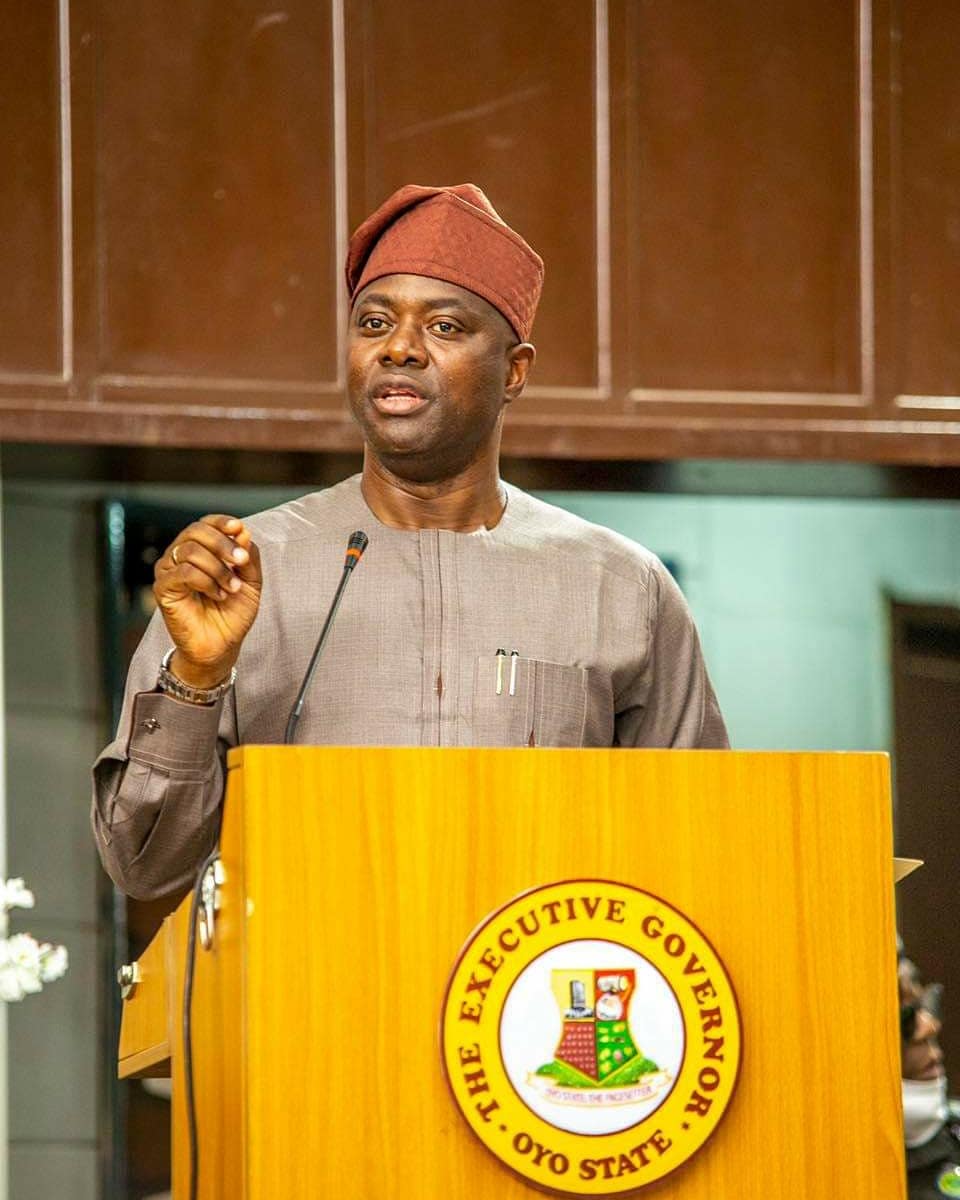 Oyo State Governor, Engineer Seyi Makinde, on Monday, announced that his administration has set aside packages totaling the sum of 1 Billion to cover for compensation for victims of police brutality and injustice and a Micro, Small and Medium Enterprises (MSME)
scheme, for youths.
The package includes an initial deposit of N500 million for MSMEs and another N500 million as compensation to victims of police brutality and injustice.

Governor Makinde, who made the disclosure while addressing traditional rulers, local government chairpersons, security operatives and other stakeholders at a meeting on Monday, said that the state government will equally employ 5,000 youths across the Ministries, Departments and Agencies, in order to address the challenge of youth unemployment in the state.

He added that the state will also ensure that the 2021 Budget captures a Direct Labour Agency that will allow youths with prerequisite skills to have access to jobs whenever projects are awarded.

A statement by Mr. Taiwo Adisa, the Chief Press Secretary to the Governor Makinde, , indicated that the governor stated these at the House of Chiefs, Secretariat, Agodi, Ibadan, while meeting with the traditional rulers, security chiefs, religious leaders and chairmen of the 68 Local Governments and Local Council Development Areas.

Some of those in attendance include the Olubadan of Ibadanland, Oba Saliu Adetunji Aje Ogungunniso1; Alaafin of Oyo, Oba Lamidi Adeyemi III, and other traditional rulers across the state; the Aare Musulumi of Yorubaland, Kwara and Delta States, Alhaji Alhaji Dawud Makanjuola; the State’s Chairman of the Christian Association of Nigeria (CAN), Apostle Joshua Akinyemi; the Deputy Inspector-General of Police, Leye Oyebade, and Service Commanders in the State.

He stated that apart from the platforms already put out by the government for victims of police brutality to report their experiences, the state will inaugurate the judicial panel of inquiry within the next one week, adding that his government will continue to live up to its mantra of putting the people first.

Governor Makinde, who expressed sadness at the news of the kidnap of an LCDA chairman, said the government will do everything within its power to get him freed, but that local government chairmen also have work to do within the localities – and quickly too.

The governor further said that the police will have to return to playing its role, noting that traditional rulers and other stakeholders have a role to play in ensuring that the police come back and perform their duties diligently.

He maintained that the state will begin the process of rebuilding police stations that were razed or vandalised, warning residents of the state to, however, be vigilant and watchful about external people coming to attack facilities in the state, as, according to him, killing, arson are not part of Oyo State, a state of Omoluabi.

Similarly, the governor decried the attacks on Lagos, saying they were targeted attacks and not particularly mob action, stating that traditional rulers have a lot of work to do in their localities to ensure that security and peace continue to reign.

He said: “This is the first time we will be meeting like this after the events of the past two weeks. We are not here to apportion blame or do a post-protest analysis. I can see that those who spoke earlier were commending me. I appreciate you all for the kind words but I have to say that there is nothing extra. I am doing the job that you gave me in Oyo State.

“I want to reassure the good people of Oyo State that all criminal elements that engaged in wanton destruction of lives and properties will be dealt with. I can give you that assurance because killing, arson, destruction of means of livelihood are not part of us. They are not the things that we stand for as a people. Yes, I supported the protest and I did not have any regret for supporting the protest.

“I had a serious exchange with the Commissioner of Police. This is also true for the Police hierarchy. They were losing men and police stations and they needed to act. But I said we have to act with caution. It is difficult to understand what I was trying to say in the heat of things but he did in the end. And we agreed and proceeded with caution. That is why the situation did not really go beyond what we saw.

“I also want to urge members of the Nigeria Police Force working in Oyo State to step up to their responsibilities to protect lives and properties. Just like the DIG said, there is no agency that can take the duty of the Police. They are to maintain internal order. So, we have to give the Police the opportunity to carry out their constitutional responsibilities and functions. We know that trust is low right now, but you can quickly regain public trust through your professional conduct. Even among the leaders, there is a trust-deficit. We definitely have to proceed from this point forward with caution. We must not read ethnic, religious or political coloration to the challenges we are faced with.

“Let me also state that we have set up an initial Five Hundred Million Naira (N500million) Compensation Fund for victims of injustice. So, I encourage everyone who has suffered any form of injustice in the past or as a result of the #EndSARS protests, to please take advantage of the platforms we have provided to log their cases. We have an email service and a direct reporting portal on the Oyo State Government website. A judicial panel for Oyo State will be inaugurated in the next one week to look into cases of injustice.

“We know that the protests have been as a result of simmering anger among the youths. We are aware of the economic situation, especially the reduced income of many due to the COVID-19 pandemic and also the general unemployment situation in the country. Let me reassure you that we will continue to prioritise actions that will positively impact the youths.
“For this reason, we have taken the following immediate actions to address some of the issues raised by the youths during the protest: I have directed that a 500 Million Naira MSME fund be set up. This fund will be disbursed to youths who have bright entrepreneurial ideas that will provide further employment and improve the economic landscape in Oyo State.

“I have directed the employment of 5,000 young persons across all government agencies over the next few months. We have been talking to Oyo State Road Maintenance Agency, OYOWMA, before now. We have been talking to AMOTEKUN. We have to, immediately, wrap some of those recruitments up and put these people off the street. The criteria for employment and the dates for assessment will be announced by the agency authorities.

“Going forward, starting from 2021, there will be provisions made for the Direct Labour Agency in the budget. This will ensure more employment opportunities for residents who have requisite skills when projects are awarded.”

Addressing the menace of looting warehouses across the country, the governor decried how a contractor in the state, who got a contract to supply palliatives on behalf of CACOVID, lost millions to hoodlums who looted his warehouse.

He stated that the government will proceed with the fifth phase of the distribution of palliatives by the end of the week, having completed the verification of the individuals who qualify for them, saying “Yes, we still have few CACOVID items left. We have done palliatives in phases. The first phase was for the poorest of the poor among us. In the second phase, we took care of the farmers.

“In the third phase, we took care of civil servants and political office holders. In the fourth phase, I believe we took care of the vulnerable within our environment. We are waiting for the rice promised by the CACOVID. It has not gotten here but we have now decided to go ahead with the fifth phase of palliatives distribution. We will be proceeding with the fifth phase distribution of palliatives by the end of this week having completed the verification of the individuals who qualify for them.”

The governor maintained that his administration will continue to run an open-door policy and that it will always be happy to dialogue with everyone for the economic good and development of the state.

“Finally, this is a period where we are saying there is peace but will the peace endure? We want peace that will endure in Oyo State and to have peace that will endure, every one of us has to contribute. All of us must go back and organize structures in our different localities. We also need to bring the vigilantes in and I believe in the days and weeks to come, they will come and study how we are ensuring peace in Oyo State,” the governor added.

The Alaafin of Oyo, Oba Adeyemi, charged the government to listen to the youths, stating that the recent challenge faced by the country was not only as a result of police brutality but also the failure of those in authority to rise to the occasion.

The Olubadan of Ibadanland, and the Soun of Ogbomosoland, who spoke through their representatives, also echoed similar lines.

Earlier, the Speaker of the Oyo State House of Assembly, Rt. Hon. Debo Ogundoyin, said the government will not hesitate to implement all that has been agitated for, especially in the area of Police reform and reform in the constitution, as well as provision of gainful employment, among others.

“At this juncture”, he said, let me urge us all to put an end to vandalization of public properties in the name of protest. Let us say NO to the destruction of lives and properties so that, together, we can jointly build the Nigeria of our dream.

“As a lawmaker, and as lawmakers here present, we will do everything possible to give the legislative support to mount pressure on Governor Makinde to implement reforms to make life comfortable for the people of Oyo State, most especially the youth, which is our future,” Ogundoyin said.

The Garrison Commander, 2nd Mechanised Division of the Nigerian Army, Ibadan, Brigadier Soji Ogunsugba, also called for concerted efforts to help bridge the trust deficit between the police and the populace, adding that the police have a constitutional role to protect the people.
Deputy Inspector-General of Police, Oyebade, maintained that all stakeholders must work together to chart a way forward and make the Police better, saying that vandalization, destruction of Police facilities and killings must stop, because it will not take the society anywhere.

“I am saying this because the person you have killed will not be coming back but the family will suffer for that loss. Let us think deep. I want us to go back and let us hold ourselves together as one. Let us remember how our forefathers started. Let us keep faith with the present and have hope for a better tomorrow.
“We have spoken together. All the security agencies represented here were in a very exhaustive meeting and we are on the same page. I am here to announce to you that it is going to be a new dawn. Let us accept what has happened as history. The way forward is to hold ourselves together.