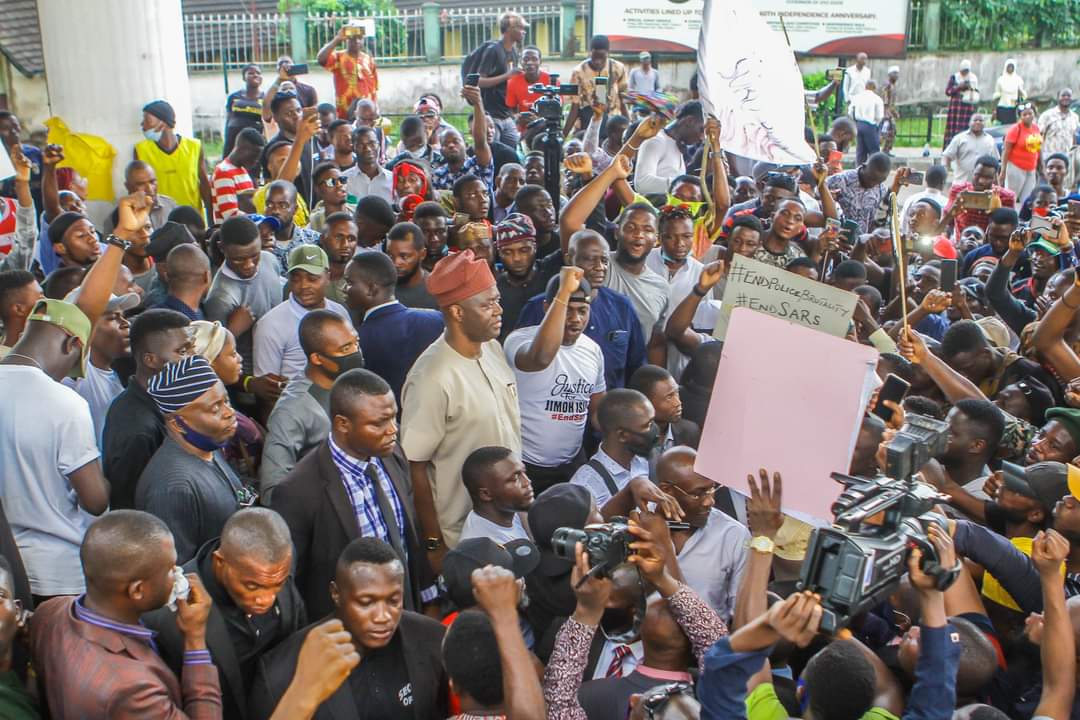 …says ‘I’m with you on call for end to police brutality’
…promises to engage with youths, address unemployment

Oyo State Governor, Engineer Seyi Makinde, has declared his full support for those calling for an end to police brutality, noting, however, that the ongoing protests must continue to be peaceful and constructive in order to achieve the desired result.
Governor Makinde stated this on Tuesday, while addressing the #EndSARS protesters, who converged on the Government Secretariat, Agodi, Ibadan.

He promised to get all protesters who were arrested in the course of the protests released by the Police, while also pledging to ensure that no further life is lost to the protests in the state, as according to him, his government has put in place mechanisms to ensure the safety of protesters.
A statement by the Chief Press Secretary to the governor, Mr. Taiwo Adisa, indicated that Governor Makinde, who was accompanied by the Speaker of the Oyo State House of Assembly, Rt. Hon. Debo Ogundoyin, the Commissioner for Youth and Sports, Seun Fakorede and some members of the State House of Assembly, commended the protesters for being peaceful.
He added that beyond the #EndSARS protests, there were underlying challenges of pervading anger and frustration in the land, noting that leaders have to do more to create employment for the teeming youths.
He said: “I can tell you that all of these protests are not just about SARS. There is a need for employment for the youths. There is anger in the land. Job opportunities are few and far in-between. So, as leaders, we have to do more.
“Our youths have to be productive. We have to create opportunities for you.
“Peaceful protest is guaranteed under our constitution, but I want to beg you, all of the protesters that have been detained will be released. I have spoken with the Commissioner of Police and the Attorney-General of the State.
“But we cannot do some of the good things we have in an atmosphere of chaos. I have listened to you. I have the Commissioner for Youths here. He will see and engage with your leaders.
“First, I would have been with you earlier but I had to go to Ogbomoso. I went out there to see things for myself. I visited the Kabiyesi and also met with the families that lost their loved ones. So, what I am saying is, I am with you 101 per cent.
“I want to thank you because you are Nigerian youths and you are not lazy. You are not violent; you did not vandalise anything. What you have done is to show peacefully that certain policies of government, especially the brutality by the Nigeria Police Force should be addressed.”
He stated that his government would follow the path of constructive engagement to diffuse the tension in the land.
The governor further reiterated that he does not want any further loss of life, warning, however, that everyone must behave responsibly.
“As a government in Oyo State, we have to find the means to diffuse the tension. And one of the things we have in view is to follow the path of constructive engagement and there has to be a way to get that engagement going.
“The President and the IGP said SARS has been ⁸disbanded. In Oyo State, hold me responsible and accountable. I don’t want any further loss of lives. All of us must take that responsibility to behave responsibly.
“We will have to find a way to engage ourselves. There will be palliatives that the Oyo State government will roll out within the next one week. All the stakeholders must find a means to get people who will represent them. There is no way we can have any meaningful discussion in an atmosphere of chaos.
“When somebody said we should use force, I said we cannot use force, because I came to you when I was looking for votes. You organised yourselves and voted for me. And it is now time for me to listen to you and ensure that whatever it is that you want done by your government, we will find a means to do it.
“But the major relevant issue is that we need to provide employment, means of livelihood for our youths and, on that, I am with you. I identify with you. And collectively, we will make our state and country better.”
Earlier, a non-governmental organisation known as the Citizens’ Gavel, had, in a petition addressed to the Speaker of the Oyo State House of Assembly, titled: “Petition against the activities of the Special Anti-Robbery Squads (SARS),” stated that cases of abuse of citizens by operatives of SARS have increased despite several reforms announced by the Inspector General of Police.
In the petition signed by the organisation’s Legal Associate/Consultant, Mosebolatan Oyedeji ESQ, the organisation demanded for restitution and reform, calling for the immediate release of all protesters during the #EndSARS protests across states; an immediate directive to all police formations to stand down from violently repressing peaceful protests and that violating officers should be summarily disciplined; the identification, prosecution and sentencing of all officers involved in the killing of Isiaka Jimoh and that all officers involved in acts of brutality against protestors in FCT, Delta, Edo, Abuja and Ogun states must also face disciplinary panel.