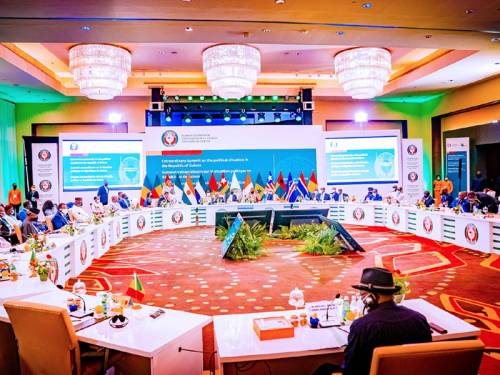 The Economic Community of West African States (ECOWAS) has imposed targeted sanctions on the leaders of the military juntas in Guinea and Mali, a move aimed at forcing the rapid return of the countries to democratic rule.

The decision was taken at an extraordinary summit of heads of state and government of the 15-member bloc in the Ghanaian capital, Accra on Thursday.

A statement issued by the ECOWAS Commission said the sanctions which involve travel ban and freezing of financial assets are aimed at members of the juntas and their family members.

In Guinea, the sanctions take effect immediately against all the members of the National Committee of Reconciliation and Development (CNRD) junta and their family members. And in Mali, it will affect only people identified as participating in a deliberate move to forestall the transition process there.

The summit was attended by heads of states from nine countries, including the leaders of Sierra Leone, Cote d’Ivoire, Guinea Bissau and Senegal. Nigeria, the regional superpower, was represented by its Vice President, Yemi Osinbajo.

The summit was chaired by Ghanaian president and current chairman of the bloc, Nana Addo Dankwa Akufo-Addo.

“The Conference reiterates its strong condemnation of the coup of September 5, 2021 and reaffirms its demand for the immediate and unconditional release of President Alpha Condé,” the statement read by ECOWAS President Jean-Claude Kassi Brou at a press briefing reads in part. It adds that the bloc holds the leaders of the junta individually and collectively responsible for the safety of Mr Condé.

“The Guinea junta leaders were ordered to conduct presidential and legislative elections and hand over power to the elected officials within six months. All members of the CNRD were barred from contesting the presidential election.”

ECOWAS leaders in the statement however also acknowledged the “apparent commitment” of the junta to work for a quick return of constitutional order, citing ongoing consultations with national and international actors in the country.

Mali, where the military first seized power in August 2020 and later in May this year, is expected to conduct elections in February 2022, according to the resolution of an earlier summit by the regional leaders.
But there have been concerns that the transition government might not meet the deadline, amidst indication that the junta was dragging its feet.

The report on the political transition in Mali was presented by the former Nigerian President and ECOWAS envoy to the country, Goodluck Jonathan. The bloc’s decision, according to the ECOWAS statement, was an endorsement of the main recommendations contained in the Jonathan report.

It expressed dissatisfaction with the slow pace of the preparation for the elections and insisted that the date stipulated must be followed.

The Mali transition government was also ordered to submit by the end of next month a roadmap outlining the essential stages of the transition towards the elections, insisting that only reforms necessary to conduct the elections on the date indicated should be implemented.

The Chairman of the commission was instructed to compile and submit the list of individuals and groups of individuals involved in the alleged efforts to derail the Mali’s transition process for appropriate actions.

ECOWAS leaders also called for support from the African Union, European Union, United Nations, and Multilateral and bilateral partners in the enforcement of the sanctions.