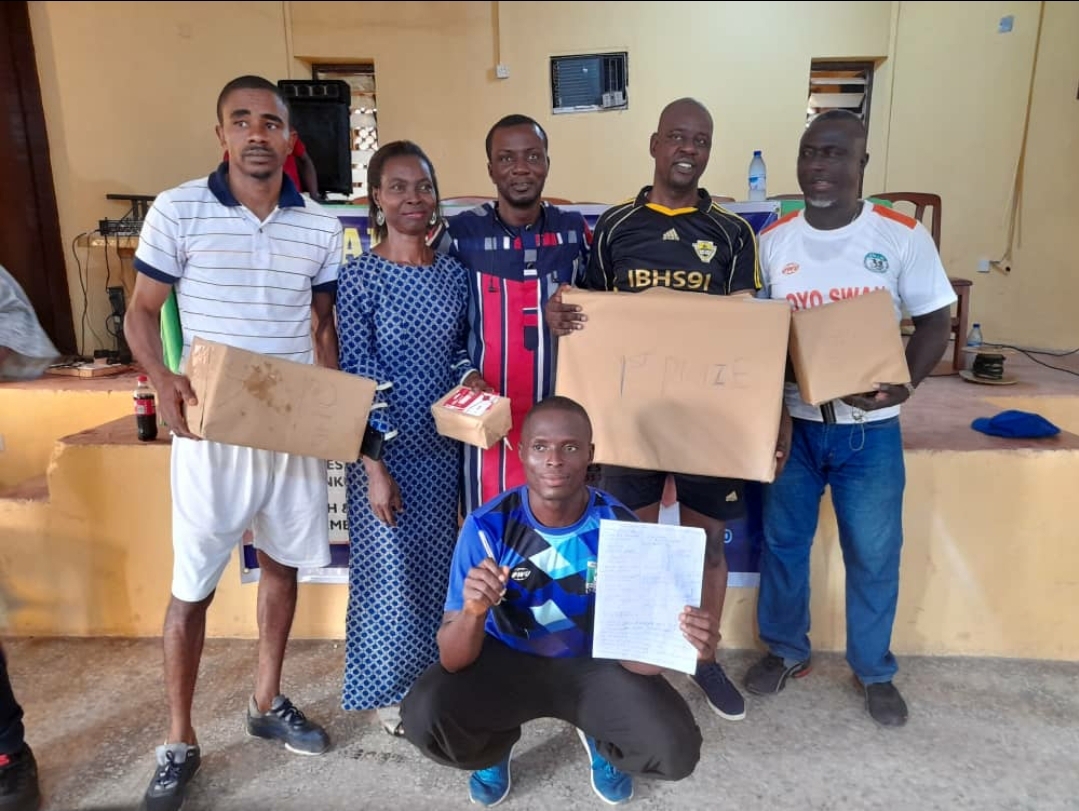 Raji Adebayo of Daily Independent Newspaper on Saturday made history by emerging as Champion of the maiden edition of the Adesoji/Oyo SWAN Table Tennis Championship.

Ike Yusuf, who bundled out Oyo NUJ Secretary Sola Oladapo and Oyo SWAN Chairman Niyi Alebiosu on his way to the final, however found it impossible to beat Raji Adebayo.

The competition’s giant killer, who eliminated the pre tournament favourite Sola Ayegbajeje at the quarter final stage of the competition, Paul Alaziri of 32FM took a joint third position with Niyi Alebiosu of Nigerian Tribune.

Both third placed players had their campaigns ended at the semi final, when they lost to the two finalists.

Also speaking at the closing ceremony of the table tennis competition, Oyo SWAN Patroness Ambassador Romoke Ayinde eulogized the organisers of the competition.

She then reiterated her persistent call for unity among sports writers and presenters in Oyo State.

Speaking earlier, the Chairman Sports Writers Association of Nigeria (SWAN) Oyo State Chapter Mr Niyi Alebiosu, whose Association organized the competition, thanked Mr Tayo Adesoji and Ambassador Romoke Ayinde for their moral and financial supports, which he noted, were responsible for the success of the competition.

Other dignitaries who graced the event included Mr Ajagbe, who donated the table tennis board used for the tournament, the General Manager of the Oyo State Sports Council Mr Gboyega Makinde as well as the Chairman of Nigeria Union of Journalists Oyo State Council Mr Ademola Babalola, represented by the Union’s Treasurer, Mr Akeem Abass, the State Chairperson of National Association of Women Journalists (NAWOJ) Jadesola Ajibola and a veteran sports journalist Mr Ade Somefun.

The Tournament’s Champion was given a standing fan as his prize, with the runner up getting a blender, while the two third placed players went home with electric stoves.

Also, the only female contestant in the table tennis competition, Mrs Yinka Bode Are was rewarded with a gift for her courage in daring to compete in the male dominated tournament.