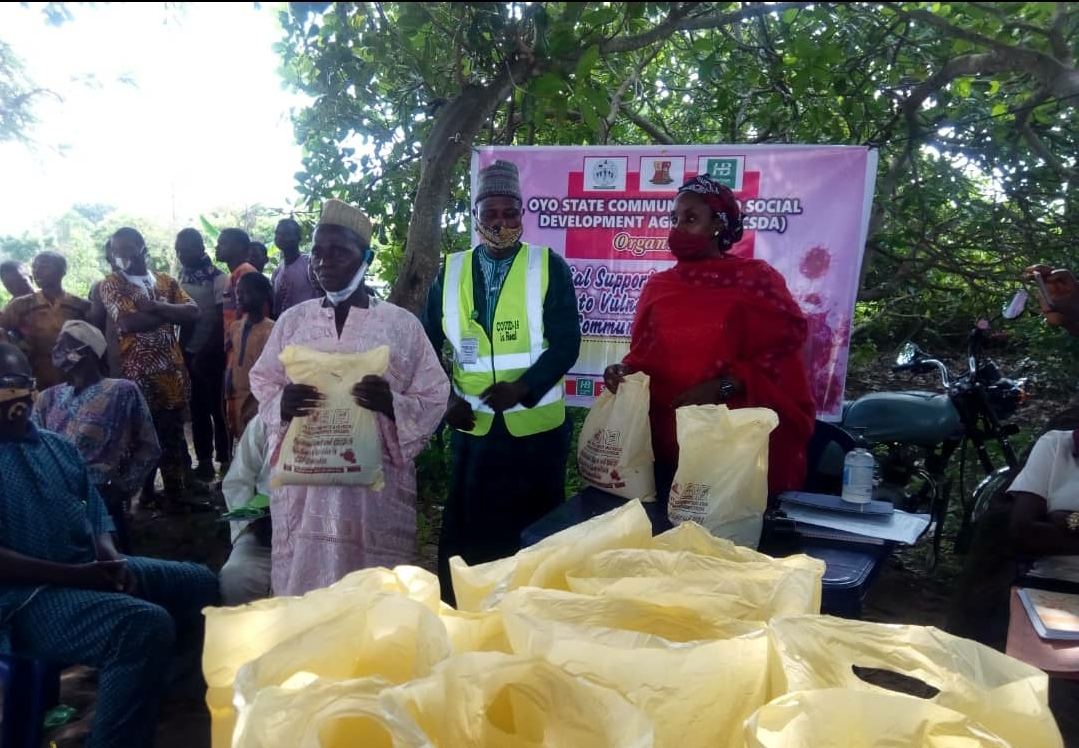 To mitigate against the effects of Covid-19 pandemic and assist people that were economically affected, Oyo State government, the World Bank and Heritage Bank PLC have distributed palliative packages to over two hundred less-privileged individuals in the State.

The intervention also included a psychosocial service in form of counselling to the vulnerable people to lessen the psychological effect of the global pandemic on their mental health.

According to the Acting General Manager of the Oyo Community and social Development Agency (CSDA), Engr. Abisola Adabanija during the sensitization campaign and distribution of the palliative packages in Ijanadogo community in Oriire North LCDA, Olokoto and Sooro community in Irepo Local Government, Kishi, disclosed that the new component in the efforts of the agency was a World Bank initiative targeted at the vulnerable and less privileged, aimed at strengthening them on coping mechanisms on after-effect of Covid-19 pandemic and other socio-economic occurences.

Engr. Adabanija stated that apart from the social infrastructure funded by the World Bank through the agency in the rural communities, as the CSDP project would be winding up in September, 2020, the new component would look into some of the psychological problems, facing individuals and families.

She explained further that the project under the leadership of the Executive Governor of Oyo State, Engr. Seyi Makinde would support the agency to respond to the needs of people in specialized areas of psychotherapy, counseling, training and provision of psychosocial support to the less privileged.

“This programme was designed with the support of the World Bank and our donor body, which is Heritage Bank to help support individuals from different homes that research has shown are affected by the effects of the Covid-19 pandemic in the State.

“Apart from the palliative packages which will assist in meeting some of their immediate needs in food and consumables, we are also giving them counselling to strengthen them psychologically against depression and other mental issues that might arise from their vulnerability status.

“Some might decide to commit suicide if they keep their issues to themselves or start having mental challenges, the best thing is to have sessions with them to know how they feel and encourage them about survival.”

Engr. Abisola added that the sensitization to the CSDP beneficiary communities was to identify some of the psychosocial problems and how they would be able to cope with economic and other social vices after Covid-19 pandemic.
Counseling sessions were seen being conducted privately on individuals by the agency’s Gender and Vulnerable officer while an NGO called Rural Nurture Initiative was also on ground to support.

Palliatives donated by the Heritage Bank Plc was distributed to vulnerable members of the communities visited.

Beneficiaries at the event could not hide their feelings as they were full of praises for the gesture.

It would be recalled that the agency has been identified as one of the platforms for the implementation of the new World Bank-assisted project in the State called CARES(Covid-19 Action Response and Economic Stimulus) which has been slated to take of immediately after the termination of the current CSDP in September, 2020.