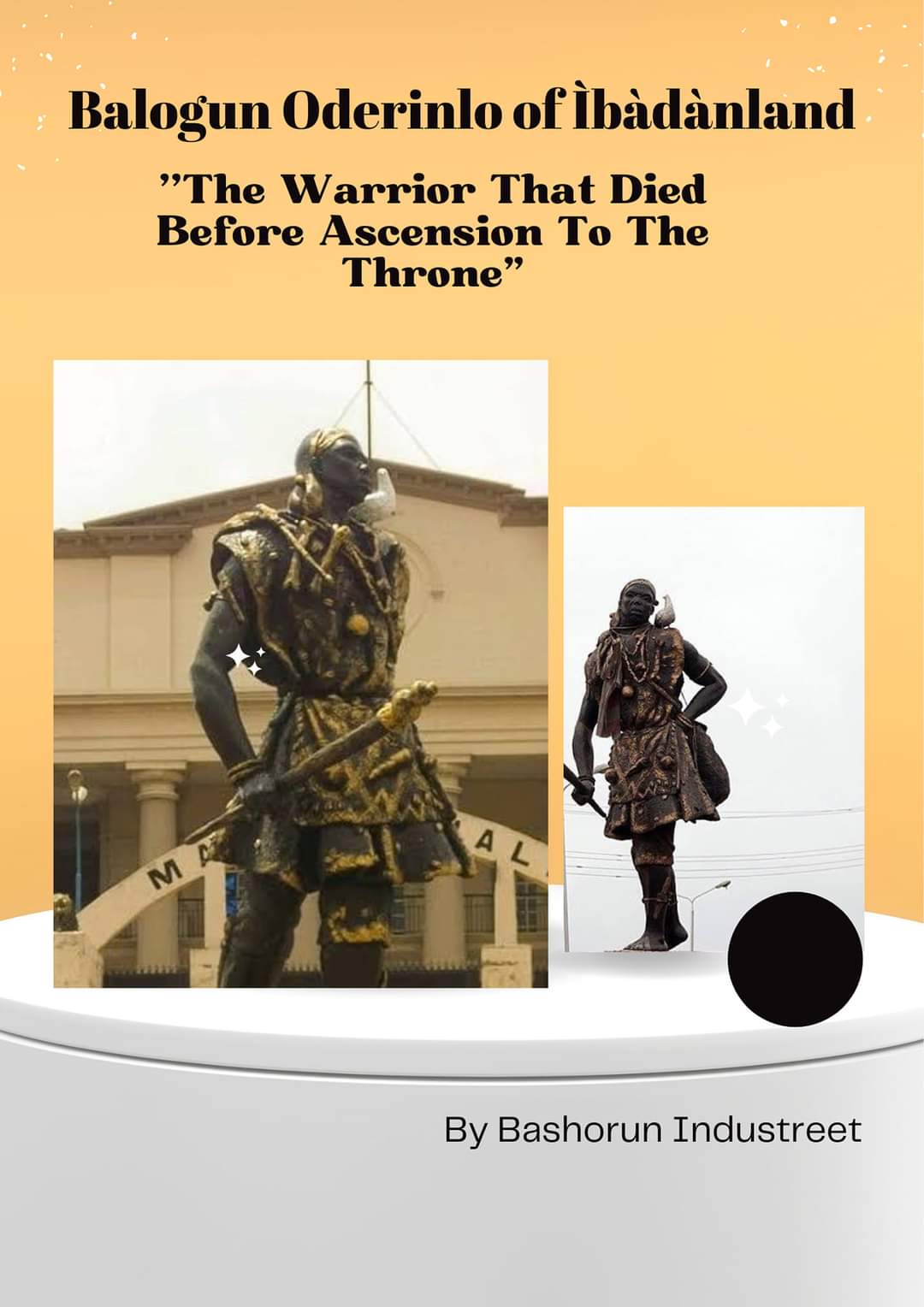 Balogun Oderinlo who was the father of Tampe, was born in Agberi in Osun State. He
was among the first settlers of the third Ibadan after the Owus had been
dislodged.

After the demise of the first Balogun of Ibadan, Bankole Aleshinloye, he became the second Balogun because the most powerful warrior then calle Elepo (the Mogaji of Adelakun ruling houses) refused to take up the title Opeagbe was the Osi Balogun.

His contemporary and bosom friend was Lasilo, the Balogun of ljaye who succeeded Balogun of Ogunoroju. He was very considerate and a loving person. When Elepo usurped his position as Balogun during the raid on Ede
and llobu, he did not take offence until Oluyole resolved the matter and Elepo the greatest supporter and friend of Oluyole was eventually expelled from Ibadan.

Oderinlo was the Balogun who crushed Ilorin Army at the Osogbo war in 1840 on
the invitation of the Ataoja of Osogbo. The success in the war saved the Yoruba race from the Fulani Jihadist. Oderinlo also led Ibadan Army to Osu war against the ljeshas which was won by the Ibadan army. This incident earned Oderinlo the appelage: “Omo a fi Fulani bo Osun'”

After the Fulanis systematically captured and made Ilorin their territory, they sacked the old Oyo Empire in 1835. They were still not satisfied with their victory; they wished to extend their rule deep into the heart of Yoruba land. Thus in 1840, they set to capture Osogbo , a Yoruba town. The Fulanis, under the command of Ali , the Balogun Fulani of Ilorin, laid siege on Osogbo.

When the king of Osogbo realized that the Ilorins were too strong for the Osogbo army, he summoned the Ibadans for help. Ibadan immediately sent some auxiliaries to Osogbo under the command of Obele alias Mobitan , and Alade Abimpagun. As this force could not stop the Ilorins, another contingent was sent to Osogbo under a more experienced leader. But still the Ilorins won every battle and gained more ground.

When Ibadan realized that the Ilorins were becoming more threatening to Yoruba land, they sent a large and stronger force under Balogun Oderinlo to crush the intruding forces and Jammas of Ilorin . When Oderinlo and his men arrived at the battlefield, they realized that things had gone worse than they thought.

They could not show their faces in the open field for the fear of the Ilorin horses, and for about 20 days after their arrival at Osogbo, they could not fight outside the town thickets. Oderinlo suggested that Elepo, a brave Ibadan warrior was badly needed at the war-front. Elepo had been rejected by the war-chiefs of Ibadan for his actions at the late Agbamaja expedition.

As soon as the message from Oderinlo reached Ibadan, the Bashorun wished he could send Elepo to Osogbo but could not go against the wish of other war-chiefs. The Bashorun gave Elepo a cow to worship his god, Ori , and pray for the victory of Ibadan at the war-front.

He was supported by Balogun Lasilo of ljaiye. At the peak of the battle, Balogun of
Ibadan had to join the rest of Ibadan warlords in Igbo-Ora. Balogun Oderinlo not wanting his friend, Balogun Lasilo of ljaiye to be disgraced, advised him to retreat from Sagaun as soon as possible. Lasilo and his men accordingly
retreated from Sagaun before the place was captured on that very day. Sagaun had since become part of Igbo-Ora till today.

Finally, as a compassionate and level headed leader, on his return from Sagaun war, Oluyole fell ill and died. People were ready to pull and plunder his house on account of the atrocities perpetrated by him during his reign.

Balogun Oderinlo prevented this by posting the Agbakin Yerombi with his men at the
entrance of the Oluyole palace to prevent any outrage or disorder. With the death of the Basorun Oluyole, the mantle of governance of Ibadan fell on Balogun Oderinlo, but as some of the important Chiefs were then absent
from home, he was not disposed to assume a higher title of Baale until their
return.

At the war-front, the Ibadan could not attack the Ilorins during the day because Osogbo was practically in a plain and the Ilorin horses might have advantage of them with disastrous results.

They decided to attack at dusk when the Ilorins would no longer be able to use their horses. About 2:pm, the well prepared Ibadan army left the gate of Osogbo for the battlefield. They were to keep a strict watch and arrest anyone suspected to be a spy.

About a mile from the Ilorin camp, they halted and arranged the order of the attack.

The Osogbo army and the earlier auxiliaries were to handle the center of the battlefield, chiefs Abitiko and Labuju were to command the right wing, Balogun Oderinlo with the rest of the Ibadan war-chiefs were to form the left wing of the army. The Ilorin camp was then attacked at midnight. The watchword was “ Elo ni owo odo? ” (How much is the ferry fare?).

The reason this watchword was chosen was because the river Osun had to be crossed in entering Osogbo from the south, and anyone who could not tell this was likely to be an enemy.

Balogun Oderinlo ruled Ibadan for only one year without assuming the title of the prestigious Baale. His son Tampe succeeded him and rose to the post of Maye Balogun.

Balogun Oderinlo was among the six generals who plotted against Oluyole after the campaign. He was also among the four who later rescinded that decision, leaving the two who did not rescind, Lajubu and Akinluyi to die in a purge by the Bashorun.

Balogun Oderinlo, during his life time, allotted land around Bere- Mapo to some Ibadan warlords as Balogun of Ibadanland, prominent amongst them were Sunmola Laamo from Ikoyi, who later became Otun Baale Olugbode
(1851), Ogunmola from Fesu, Dada-Opadere was a close relative of Balogun Oderinlo.

To this day nobody knows how Balogun Oderinlo died, but the sudden and mysterious nature of his death has led many to speculate that he may have been poisoned. After his demise, Baale Opeagbe replaced him on the throne of Ibadan.

Balogun Oderinlo has been honoured in Ibadan, with a statue of him standing at center of the road facing Oritamerin not far from Mapo Hall and the statue of Bashorun Oluyolebat Beere. His house and some of his descendants live not far from Oja’ba till this day

Industreet Bashorun writes to remind the public not to teach

Tobi Amusan, Ozuah and History Behind The N1.14b Vehicles for Niger