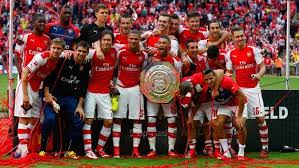 Arsenal have defeated Liverpool 5-4 on penalty to lift the community shield.

This came after the game ended 1-1. Pierre-Emerick Aubameyang’s strike put Arsenal in front in the first-half before a late equaliser from Liverpool substitute Takumi Minamino.

Mikel Arteta’s side held their nerve to prevail in the penalty shootout.

Virgil van Dijk was fit to start in defence as James Milner skippered Premier League champions Liverpool against Arsenal in the Community Shield.

The Holland defender came off in Tuesday’s friendly against Red Bull Salzburg with a cut above his right eye but started as Jurgen Klopp named a strong-looking side at Wembley.

Emiliano Martinez got the nod ahead of Bernd Leno between the sticks for Arsenal, while Rob Holding started in defence despite reports that a loan move to Newcastle is imminent.

Both sides – just like in the women’s final earlier in the day – took a knee before the match got under way as the rain fell in the capital.

Liverpool started the brighter and found the net in the seventh minute. David Luiz unceremoniously brought down Georginio Wijnaldum and Andrew Robertson whipped in the resulting free-kick, with Van Dijk directing past Martinez.

But the offside flag was raised and the video assistant referee ratified the on-field decision following a review.

James Milner screamed in frustration after heading over a Neco Williams cross as the Reds continued brightly, with the irritation only increasing after being hurt by a moment of quality in the 12th minute.

Bukayo Saka switched the ball to Pierre-Emerick Aubameyang on the left, with the Arsenal star cutting in and curling a superb right-footed strike past Alisson Becker from the edge of the box for the opening goal.

Arsenal’s Pierre-Emerick Aubameyang (left) scores his side’s first goal of the game during the Community Shield at Wembley Stadium, London.

The Liverpool goalkeeper had to be alert to prevent the Gunners doubling their lead six minutes later.

Eddie Nketiah dispossessed Joe Gomez and started a break that ended with the striker getting away a first-time shot from Saka’s cross that Alisson did well to push wide having got down low to his left.

The Arsenal attacker was unable to find the target next time he took aim in the 27th minute as play began to swing from end to end, with penalty appeals after Sadio Mane went down under pressure from Hector Bellerin falling on deaf ears.

Mikel Arteta’s side had to dig deep during the back end of the first half, with Liverpool peppering the box with crosses.

Some just evaded their intended target and others were cut out by the first man, with Robertson and Mane looking particularly dangerous on the left.

But Arsenal also provided a threat from out wide and Saka’s low ball threatened as half-time approached.

Martinez superbly blocked a Mane shot with his feet as Liverpool tried to break down Arsenal’s backline, with substitute Takumi Minamino seeing a hopeful attempt denied.

Minamino was rewarded for his efforts in the 73rd minute, however, with the January signing registering his first goal for Liverpool after a scramble in the box.

A VAR check followed amid suggestions of a handball by Salah during the build-up but the goal stood with the scores level at 1-1.

The game went to penalties after the 90 minutes, the showpiece event does not have additional time in the event of drawn ties.

It was Arsenal who came out on top as Rhian Brewster hit the crossbar with Liverpool’s third attempt before Aubameyang sent Alisson the wrong way to seal a 5-4 shootout victory.