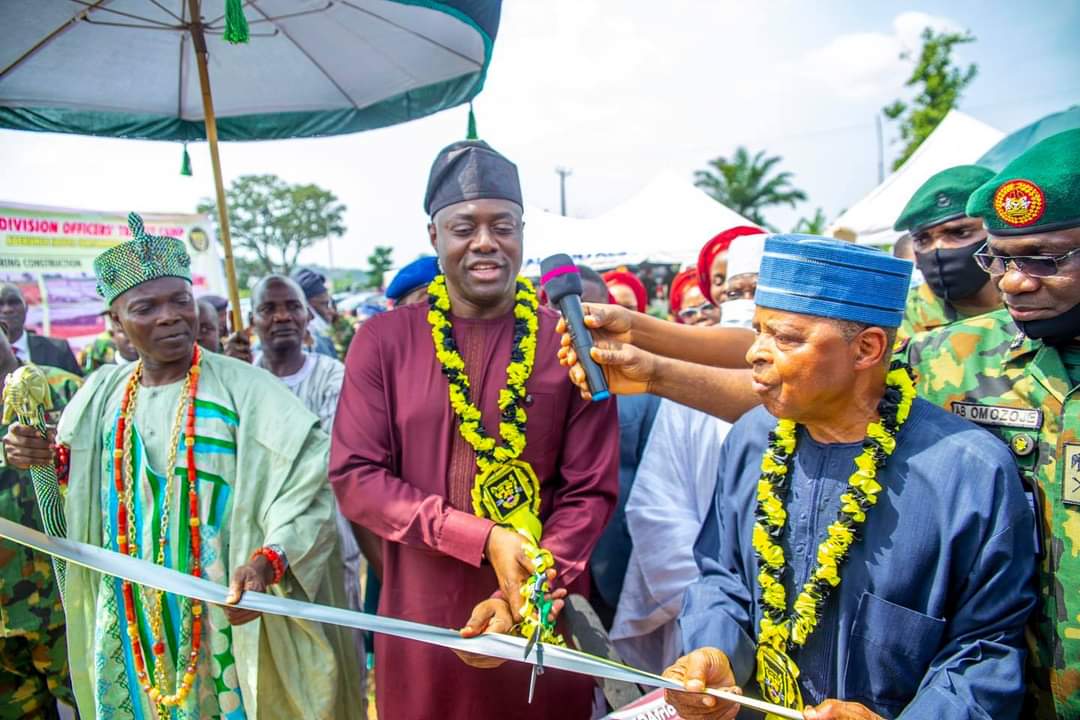 Oyo State Governor, Engineer Seyi Makinde, on Thursday, declared that the level of professionalism and nationalism being displayed by the Nigerian Army while on election and other political assignments within the country, showed that there is still hope for the country.
Governor Makinde noted that the Army has, by its recent conduct, proven its mettle as a nationalistic institution.

A statement by Mr. Taiwo Adisa, the Chief Press Secretary to Governor Makinde, indicated that the governor stated these during the commissioning of the 2 Division Officers’ Transit Camp at the Adekunle Fajuyi Cantonment, Odogbo, Ibadan.
According to him, the recent challenges between security agencies and the public has made it clear that it is only through professionalism that such challenges can be surmounted.

“Let me also use this opportunity to thank members of the Nigerian Army in Oyo State, who, as part of Operation Burst, stepped in to maintain law and order and avert crisis in our state in the last few weeks. We thank you very much,” the governor stated.
He also commended the officers and men of 2 Division of the Nigerian Army, as well as other security agencies, for the numerous roles being played in maintaining peace and order in Oyo State, adding that the government would continue to do whatever it can to make life better for the officers and men of the Division and other security agencies.

He said: “Well, let me also use this opportunity to thank the GOC [General Officer Commanding] and his team here. I was in Edo State to monitor the Edo Governorship Election and I was also in Ondo State. And I stand here to acknowledge the professionalism of the officers and men of the Nigerian Army posted to those places for the purposes of the election duties.
“I will urge you to please keep it up. This is about the only hope that we have as a country. It is the only institution that has been nationalistic.
“Well, we know that things are not rosy between the security personnel and the citizens in general right now, but I will continue to reiterate that it is through professional conduct that we can get the trust level up.”
He expressed delight and congratulated the GOC, 2 Div, Major Anthony Omozoje, and Army Engineers on the completion of the transit accommodation for personnel posted to the Division, which, he described, as laudable, adding that going by his experience with projects executed by Army engineers, he rests, assured that the project would last.
He added that he is always happy to associate with the Army or any other body providing infrastructure development services in Oyo State because it is about the development of the state and its people.
“I am an engineer by training myself, and I know what must have gone into this. And Nigerian Army engineers, your footprint is all over the country. I worked in the Oil and Gas industry for so many years and I have seen bridges constructed by the Nigerian Army engineers that are still standing today, even though they were constructed during the heat of the civil war.”
He also assured the Army that the state will continue to extend the traditional Oyo State hospitality to whoever is posted to the state, adding that the state, having flagged off the second phase of operation light up Oyo State, will soon extend the LED lights to the barracks.
The governor urged the leadership of the Army to continue to speak and act against errant officers, even as he commended the GOC for taking immediate actions against some soldiers in the ‘Operation Burst’ outfit, who were reported to have brutalised residents of Ibadan,  in Beere area recently.
He added that the prompt action taken by the Army authorities against the errant officers helped to restore law and order and also restored the people’s trust in the ‘Operation Burst.’
He said: “You must always make it clear that people who act outside appropriate rules of conduct are meant to pay for their errors. It is our prayer that we continue to dwell and live at peace with one another.
“Our goal should be to work for the betterment of Oyo State and the government at large. And I will end this by saying that the officers and men that were posted to Oyo State, immediately they get here, they are of Oyo State origin.
“When the GOC sent a note to me to say that we should let the abattoir here up and we should let them operate, it didn’t take me one minute to give that approval. So, I will end this  by saying that whatever we need to do to make life better for these officers and men of this division, we are always ready to do it and we will continue to give our support.”
Speaking earlier, the GOC, 2 Div Headquarters of the Nigerian Army, Major General Omozoje, lauded the governor for the numerous supports, which, according to him, have been enjoyed by the Division.
He said: “This speech will not be complete without mentioning the numerous support which this division has enjoyed from the Executive Governor of Oyo State. Even among this, the Army Day Secondary School Cantonment has a new block of six classrooms provided by His Excellency.
“His Excellency also granted the cantonment the permit to operate its own abattoir. In the heat of the COVID-19 pandemic, the governor approved for the Commander, 2  Division Medical Services, and the Hospital, to be co-opted as a member of the Oyo State Emergency Operation Centre for COVID-19. By this, our medical personnel received training specific to the management of COVID-19 and it has impacted very well on the barracks community. For several months now, we have recorded zero infection.
“His Excellency also promised that Adekunle Fajuyi Cantonment will be captured in the phase 2 of the Light-up Oyo State Project. These are but a few of the numerous support that we have received from His Excellency. We are indeed grateful.
“So, I wish to thank the governor, our special guest of honor, for honouring us.”
The event had in attendance the Olowu of Owu Kuta, Oba Hamid Adekunle Makama, former Chief of Defence Staff, General Alani Akinrinade (rtd), former Lagos State Military Administrator, Brigadier General Raji Rasaki (rtd), chairman of the Oyo State Advisory Council, Senator Hosea Agboola, Special Adviser to the Governor on Security, COMPOL Fatai Owoseni (rtd) and a host of others.