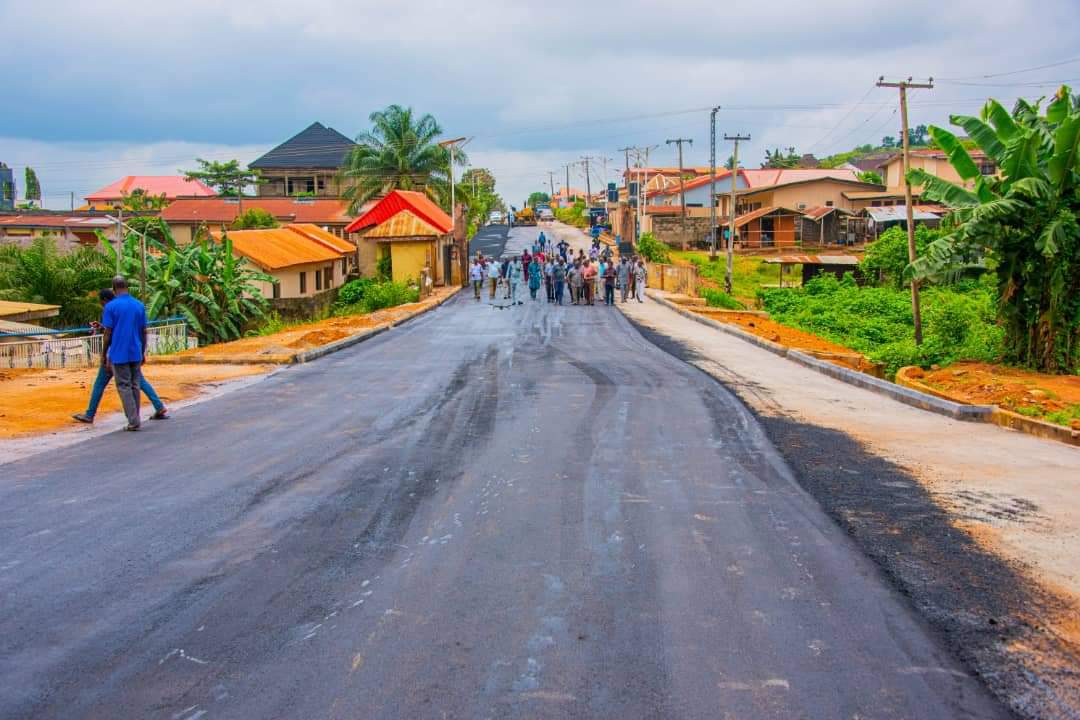 Ondo State Governor, Arakunrin Oluwarotimi Akeredolu,SAN, CON has commenced the reconstruction of over 35 kilometers network of roads in Akure, the state capital.

According to the Commissioner for Infrastructure, Lands and Housing, Engr Raimi Aminu, the roads being reconstructed are existing roads built by the government several years ago and are already in bad shapes with potholes and failed sections within the town.

Speaking during an unscheduled inspection visit on Thursday, the Commissioner appreciated Governor Akeredolu for his unwavering commitment to road infrastructure in the state.

He said the Governor’s efforts on infrastructure development has eased the suffering of the people, despite the scarce resources.

Some of the roads being asphalted are the five kilometers Oba-Ile Housing Estate which links two other Estates including Grace Land and Grace Garden with SIB, and the two kilometers Araromi to Don Bosco road in Akure.

Engr. Aminu, who noted that government is currently working on about 21 roads in the First Phase, assured that everybody will have a taste of good governance under the Governor Akeredolu administration.

He, however, urged the residents to take ownership of any government project in their areas and avoid actions that can cause damage on the roads.

The Commissioner explained that the Governor was able to continue his stride in infrastructure development because of his leadership qualities and uncommon passion for the development of the state.

He said:”A couple of months ago, we received several letters and complaints about bad portions of township roads, potholes, and failed sections within the town.

“We forwarded those letters and complaints to Mr Governor for approval after we have summarized the report and everything. And after our defence Mr Governor graciously approved it.

“Everybody knows government is working on infrastructure massively; we are constructing new roads, and despite that, we will not abandon the inherited ones because we have discovered that majority of our existing roads are bad.

“So, based on that, Mr Governor has graciously approved over 35 kilometers length of roads for maintenance as a Phase A. Oba-Ile Housing Estate road network which is about five kilometers is one of the roads. We are doing asphalt overlay now; they have done patching, maintenance and repair of drain. Few days ago they primed the surface.

“We are happy with what the contractor is doing and we are also happy with the good response from the residents. You can see they are appreciating what government is doing for them.

“Before now we promised to look into the road, and today you can see the level of completion and what the government is doing here.

“We also have other roads in the town. We started from Mother-and-Child road, Champion to Fanibi, Agagu road, Aule to Ilesa garage road, Araromi to Don Bosco, Araromi to Stadium. We are working on Adegbola-Ayedun to Leo too. And what we are doing is that we will maintain, patch and repair drains where necessary, and do complete overlay. So, we are giving new roads.

“With this, within the next couple of years there won’t be any maintenance because we discover that the lifespan of most of these roads has expired.

“So, we are working on about 21 roads as First Phase. After Araromi to Don Bosco, we are moving to Stadium and to Otenuro Avenue down to Edo Lodge, Iyeoma to Bishop’s Court, CBN quarters to Sijuade and a lot more.

“I want to use this medium to appreciate Mr Governor for his magnanimity. Despite paucity of funds he is still working massively on infrastructural projects. Even we, his lieutenants are amazed with what he is doing.

“Infrastructure is the bedrock of all development in the state. With this now, everybody is happy, the residents are happy and we thank God.” The Commissioner added.

Engr Aminu who was joined by a team of Engineers and top officials of the Ministry, assured that all the road projects will stand the test of time.

After supervising the asphalt overlay of about two kilometers Araromi road, Engr Aminu assured the poeple of the state of more life transforming projects across the state under Governor Akeredolu.

In separate remarks, some of the residents of Oba-Ile Housing Estate including Prince Kunle Ademeso and the Chairman, Grace Land Estate, Oba-Ile Olugbenga Popoola, expressed their gratitude to Governor Akeredolu for remembering them.

They promised to deliver massive votes for the APC come 2023 presidential polls because of what Governor Akeredolu led administration has done to alleviate their suffering.

Also at Araromi, some residents including Mrs Gbemisola Adelegan, Mr Jubril Yusuf, Mrs bosede Olawole, Tope Olaiya, said the good road will reduce constant damage on their vehicles and accidents that usually occur as a result of deplorable state of the road before government intervention.

According to them, the bad road has adversely affected the socio-economic activities in the areas until now.