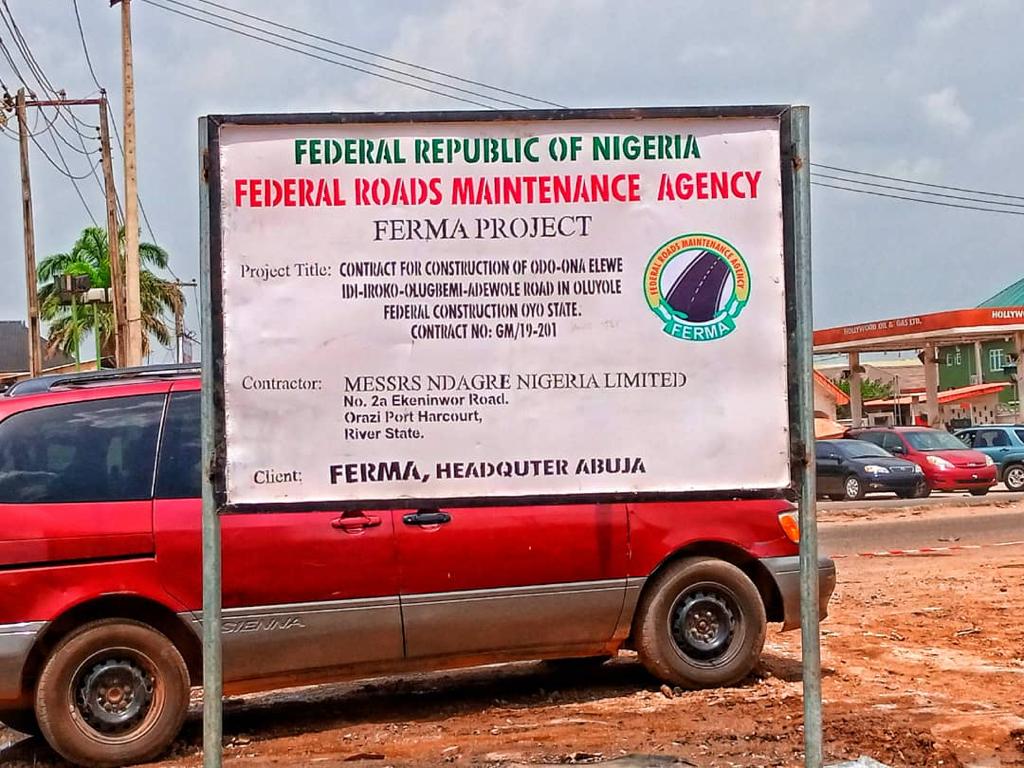 Federal Lawmaker, Tolulope Akande-Sadipe K, has drawn the attention of Oyo State Government to the deplorable condition of a State-owned road in Oluyole Federal constituency of the state.

She listed the dilapidated portions in the axis to include the Odo-Ona Elewe Idi-iroko-Olugbemi-Adewole Road, among others.

She said this during a meeting in Ibadan, with residents of Odo-Ona Elewe-Idi-iroko-Olugbemi-Adewole road, Federal Road Maintenance Agency (FERMA) and other stakeholders, on the deplorable condition of the road.

During the meeting, Hon. Akande-Sadipe detailed all the action she has taken to get FERMA to address the complaints on the length, scope and quality of the rehabilitation work.

She provided some historical background on her efforts prior to the 2019 election whilst she was the Special Assistant Projects and BIP to former Governor Senator Abiola Ajimobi.

Hon. Akande-Sadipe who is also the Chairman, House Committee on Diaspora, pointed out that, in the latter part of year 2018, Governor Abiola Ajimobi had given a written approval for the required repairs of the road and three other roads within Oluyole Federal Constituency, adding that she personally brought the issue of the dilapidated condition of the road to the attention of the Governor.

“On resumption at the National Assembly I discovered that the road was listed as a 2019 capital project and announced the commencement of the repair work and here we are today all dissatisfied with the work delivered”, she said.

She said that the road, which serves as a major economic access point linking the state to other South west states, like Ogun and Lagos, is near complete collapse.

“The poor road condition posed a serious challenge to residents of the area, damaging their vehicles and threatening their sources of livelihood. It has also endangered the evacuation of farm produce from the area”, she said.

Akande-Sadipe therefore reiterated her commitment to work with both the State and Federal governments to bring succour to the community, by ensuring that the road is adequately rehabilitated with proper drainages.

Meanwhile, Hon. Akande-Sadipe has admonished broadcasters and journalists to practice professionalism at its best and ensure they make proper findings, so as not to mislead listeners.

She called out Abiodun Adewole of Splash FM/Lagelu F.M, who was at the venue, for intentionally misrepresenting her in spite of her explanation that she was bereaved a few days prior to when he called, with the demise of her blood brother and therefore could not appear on his weekly programme. Akande-Sadipe added that she had forwarded written documentary evidence on actions taken by her, to address the concerns raised by the community to him.

She also advised Ibadan based broadcaster, Oriyomi Hamzat to practice responsible journalism as his unguarded and false statements only aggravated the situation and should he continue, he would leave her no choice but to consider legal action against his lack of journalistic ethics.

She queried why a self-acclaimed broadcaster like Oriyomi Hamzat would choose not to efficiently and responsibly carry out the due care of his profession by conducting proper investigative journalism, before making unfounded statements about her on air. “A simple trip to the FERMA’s office or a phone call to me would have cleared the air and given him an accurate storyline rather than the false sensationalism path he towed”.

Speaking, the Director, FERMA, Oyo State, Engineer Babatunde Ige apologized for commenting in error on radio programme, that Hon. Akande-Sadipe had not written a complaint letter as she earlier stated.

He said she had written to him requesting detailed information on the scope, length and specifications of the road works, but unfortunately his staff had not informed him.

In his response, the Chairman, Isokan Community, Mr. Olatunde Akadiri thanked Hon. Tolulope Akande-Sadipe for her commitment, loyalty and support to the Constituency she represents, assuring her of their prayers and consistent backing.

Present at the meeting were Baales, Executives of Community Associations within the vicinity of Odo-Ona Elewe Idi-iroko-Olugbemi-Adewole Road.