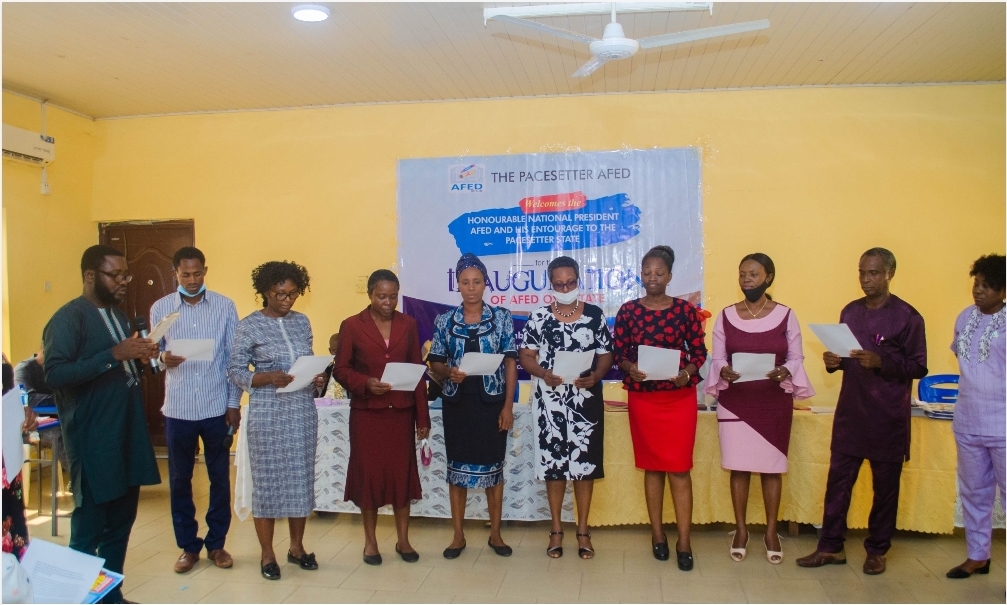 A new Chapter of the Association of Formidable Education Development, (AFED) has been inaugurated in Oyo State.

The new body has a primary assignment of ensuring that out of school children in Oyo State have access to low cost basic education, while the Association complements the efforts of Oyo state Government.

The Association’s Patron is the Proprietor of Educational Advancement Center, Dr.  Muyiwa Bamgbose.

Speaking at the inauguration of the new Chapter, its National President, Mr. Orji Kalu said the Association has been received warmly in some states in Nigeria, including Lagos State, where the Association has taken out-of-school children from the streets.

Commenting on the number of out-of-school children, he said about 14 million out of school children are in Nigeria. However, the association is poised to promote an enabling platform for low-fee paying education service providers to achieve better standard, learning outcome achievements, measurement and improvement in the country.

He revealed that AFED has partners across the globe, who offer supports to the Association, stressing that AFED has just begun a fruitful journey with Oyo State.

According to him, it was against this background that the association was brought to the shores of the Pacesetter state, to serve as a platform and pedestal were egg heads would brainstorm from time to time with stakeholders across education sector.

He bemoaned the fact that the Nigerian Education sector has not made significant progress, saying it was even more surprising that Nigeria has an increasing number of out-of-school children.

The Special Adviser to Governor Makinde on Environment, Mr. Ademola Aderinto said there is no alternative to education, therefore he encouraged AFED to give room for competitiveness among its member schools, by imbibing tree planting culture.

He prayed for sustainance of AFED, adding that the Engr.  Seyi Makinde administration is ready to offer AFED the necessary support to thrive.

She said apart from using the association as a platform to brainstorm on critical issues bothering on basic education, Oyo State Government through the Ministry of Education, Science and Technology would ensure it supports the initiative.

Mrs. Atere noted that the Association’s effort would back Engr. Seyi Makinde led administration in Oyo State’s efforts at promoting quality and affordable education to its citizenry.

The Association for Formidable Educational Development (AFED) is an association of low-fee paying private schools, in Nigeria. Established in 1999 and incorporated as a professional and humanitarian organisation to promote quality and affordable education for children from low income families.